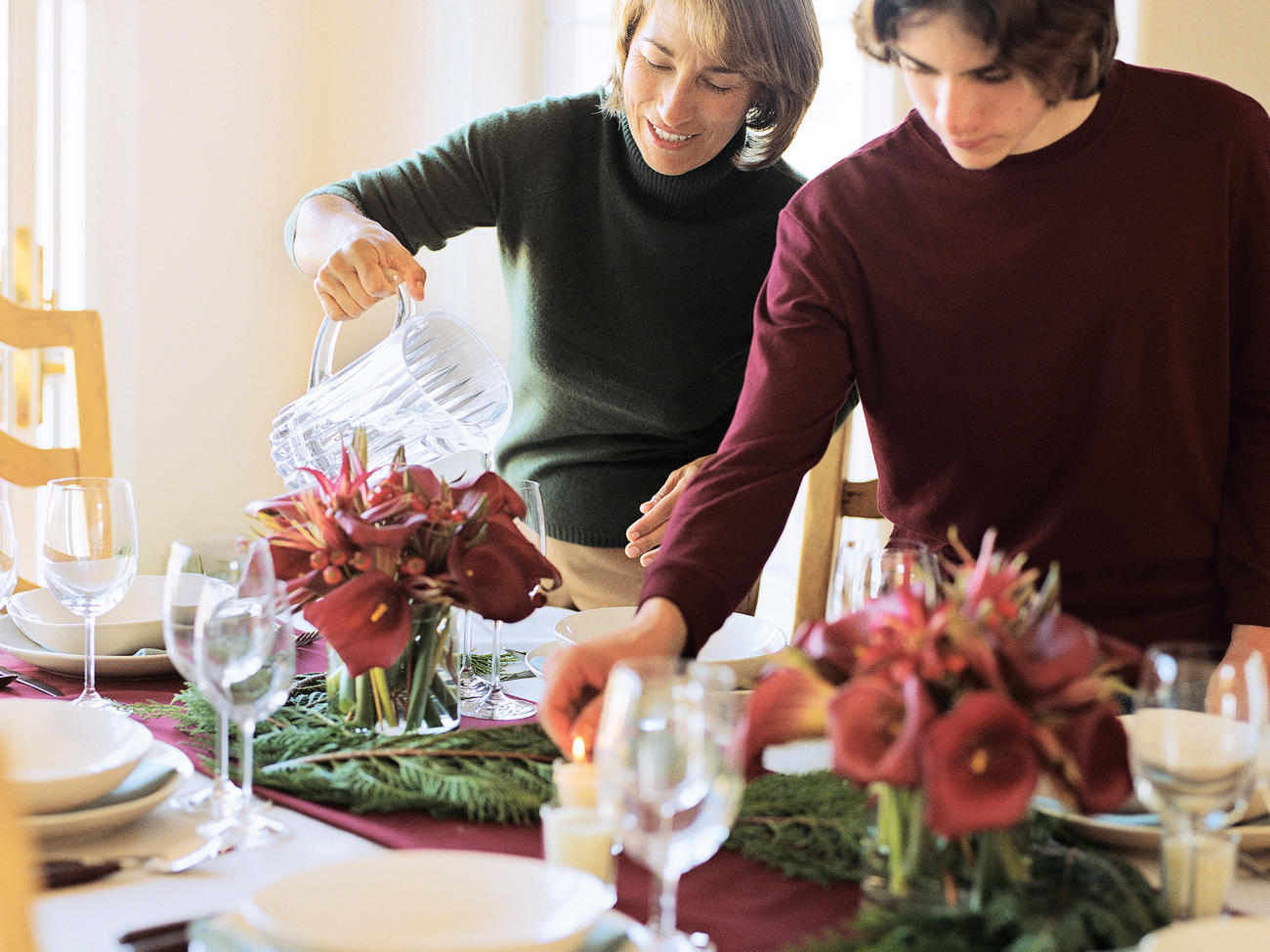 It’s a long way from rural Calabria, the “toe” of the Italian boot, to the suburban Oakland Hills, but Rosetta Costantino and her family have kept their food traditions intact since moving here more than 30 years ago. In their village of Verbicaro, Rosetta’s father, Vincenzo Dito, was a cheesemaker and grape grower. He also raised goats and sheep, while Rosetta’s mother, Maria, mastered the craft of preserving summer’s abbondanza for winter.

The family still makes its own pasta, sausages, bread, and cheese, and in the garden behind Rosetta and Lino Costantino’s home, Vincenzo grows huge quantities of Romano beans, eggplants, figs, zucchini, Italian chiles ― and San Marzano tomatoes, enough to fill 80 quart-size jars for cooking throughout the year.

On Christmas Eve, Rosetta and Maria prepare the customary Calabrian feast, called il cenone (“the big dinner”). It always includes 13 dishes, representing the apostles and Jesus. “It’s not 13 courses,” Rosetta hastens to say. “Some of the dishes might simply be fruits or nuts.” Seafood is prominent. “We shop for it on Christmas Eve morning, because that’s the mentality we have: It has to be fresh. And if you’re not at the market by the time it opens, you don’t get the best fish.”

Rosetta, who was 14 and spoke no English when she and her parents settled in the Bay Area, earned a chemical engineering degree from the University of California, Berkeley, and had a successful career in the Silicon Valley. A few years ago, she reduced her work schedule to spend more time with her two sons ― Daniel, now 16, and Adrian, 12 ― and to cook with her mother. “She had never written anything down,” says Rosetta, “and I realized that if I didn’t record the recipes, they could be lost.” The annual feast is now firmly set down in her notebook.

While many Italians and Italian Americans celebrate Christmas Eve with seafood, the menu that Rosetta and her mother have refined over the years also incorporates influences from their adopted Bay Area home. Pasta with Dungeness crab has become a family favorite, adding a California accent to the festivities. It follows a trio of antipasti: grispelle (sweet-potato fritters), frittelle con acciughe (anchovy fritters), and crostini with shaved bottarga, the dried-and-pressed tuna roe that is a Calabrian specialty.

If the pasta doesn’t showcase crab or salt cod (another frequent ingredient on the Christmas table), it’s a good bet that anchovies will get the nod. Spaghetti with anchovies and bread crumbs, prepared on Christmas Eve throughout Calabria, recalls more difficult times, when anchovies were one of the few fish all Calabrians could afford. The family eats it now, Rosetta says, because “it’s part of who we are.”

Lisa Romerein
Sautéed Broccoli Rabe with Garlic and Chiles and

The next course ― a whole salt-baked striped bass ― borrows from the Sicilian traditions of Rosetta’s husband, Lino, who was raised in Palermo. The salt crust retains all the juices, so the flesh remains moist. Rosetta cracks the hard, baked crust with a mallet, and it peels off easily in chunks. The silky white fish needs no adornment beyond salmoriglio, a Sicilian sauce of olive oil, lemon juice, garlic, and oregano. The chiles, or peperoncini, that Rosetta adds are a Calabrian signature. Side dishes include cauliflower salad, broccoli rabe from the garden, and a fresh seafood salad of compelling simplicity.

After the main course, a parade of desserts and confections keeps the family at the table for hours, nibbling on chocolate-covered dried figs, cousin Rosangela’s chinulle (sweet fried ravioli with chestnut-and-chocolate filling), and cicirata (tiny fritters with honey). But the scene-stealer is Rosetta’s semifreddo al torrone, a frozen dessert that showcases Calabria’s famed nougat. Inspired by Calabria, it’s a certified California hit.

INFO: Rosetta Costantino’s Emeryville, CA, cooking classes sell out almost as fast as she can post them on her website (from $85; cookingwithrosetta.com).

In early 2009, W.W. Norton & Company will publish her Calabrian cookbook, the first major U.S. cookbook on the ancestral home of many Italian Americans.

Mixed Seafood Salad ( Insalata ai Frutti di Mare)
Calabrians keep their seafood salad simple so the shellfish flavor stands out. It’s a juicy dish, so be sure to offer bread for dipping.

Sautéed Broccoli Rabe with Garlic and Chiles ( Rape Fritte)
Despite its name, broccoli rabe is botanically closer to turnip greens than to broccoli.

Almond Nougat Semifreddo with Bittersweet Chocolate Sauce ( Semifreddo al Torrone)
Torrone (hard almond nougat) is an Italian specialty and one of many confections associated with the Christmas feast. Most Calabrian families eat it unadorned; Rosetta Costantino chops it and then folds it into a semifreddo ― a frozen custard dessert similar to ice cream ― to give tradition a delicious twist.