The Best Inn-to-Inn Hikes in California

An alternative to backpacking, inn-to-inn hiking lets you spend your days in the great outdoors—and your nights in a comfortable bed. Author Tom Courtney tells us about his favorite such hikes 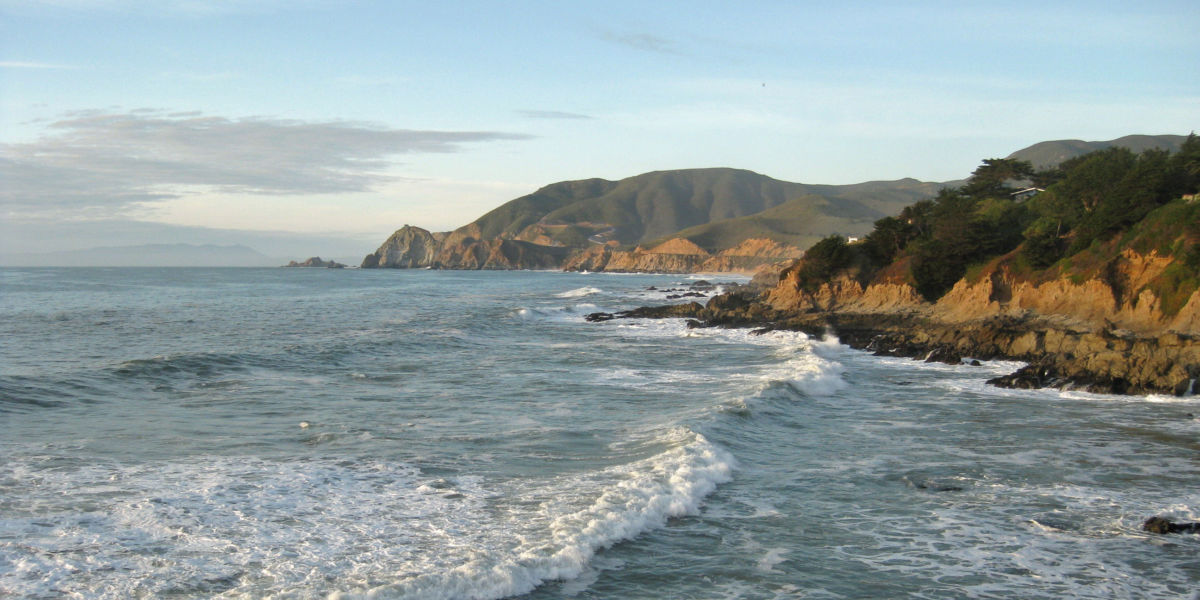 Tom Courtney had a revelation in 2006, while hiking up to the top of a ridge in the Marin Headlands for the spectacular view he knew awaited him. When he finally reached the summit, he was able to see 38 miles clear to the north, all the way to the enduring peninsula of Point Reyes, with endless stretches of green and blue between.

It was a sight to behold, but Courtney soon found himself wondering how he could get from here to there. He wondered: Could he, an avid hiker who had hiked from inn to inn across various countries in Europe, hike those 38 miles? And what charming inns could he rest his head at along the way? Courtney opened his maps and began calling in reservations along the route.

It was the beginning of Courtney’s love for inn-to-inn hiking, a style that allows hikers to leave the gear behind and focus on their stride and the nature surrounding them. Most inn-to-inn hikers need only a minimal day pack of 12 to 15 pounds, with most of it comprised of water, along with a first-aid kit, flashlight, cell phone, and rain jacket.

Over years of research, Courtney was able to compile his knowledge into a 2011 book called Walkabout Northern California: Hiking from Inn to Inn, which included hikes across the north, south, and interior of the state. A separate book, Walkabout Malibu to Mexico, came out in 2014. This year, Courtney updated his Northern California guide with current information on inns and nature trails, plus new color photos. An active readership online swaps advice for the trails on his website, Walkabout California.

Some of the itineraries, with higher elevation and day hikes of 13 to 20 miles, are built for experienced or determined hikers. Others, Courtney says, the average day hiker can easily achieve, with a leisurely pace of two miles a day over four days. Best of all, there’s a hot dinner waiting to recharge hikers at the recommended inn’s restaurant, rather than a packet of dehydrated soup.

But inn-to-inn hikers, Courtney says, lose nothing of nature’s influence during the day. Though they’re not camping, they still get the joy that long-distance hikers and backpackers enjoy out on the trail. “There’s plenty of time to meditate, to contemplate, to daydream, to start a story with a friend and pick it up two days later and finish it,” he observes. It’s an antidote to our modern lives of multitasking.”

Here are six of the hikes Courtney recommends in his newly-updated book. To get the full travel scoop, get his book, which details distances, difficulty, inns, supplies, and flora and fauna in detail. On the first day, you’ll be along a country road, with tiny farms dotting your path. On the second day along the coast, you may spot migrating whales, but you’ll most certainly see harbor seals. In the spring, Courtney says, a special sight awaits hikers: Mottled gray harbor seal moms can be seen giving birth and nesting on the rocky shelves of the shoreline with the milky white little pups they gave birth to just a day or two before.

You’ll stay at the Albion River Inn, Courntey’s favorite coastal inn in California, which is perched on a promontory above the river. Most rooms have fireplaces, porches, and bathtubs with picture windows overlooking the river. A friendly manager and a well-stocked restaurant add to its bookability. Temps: 60s and 70s. Not much rain, but sometimes the fog can feel like light rain.

Head up to Marin in the spring, and the hillsides are lush and green. By fall, those open grasslands turn to brown. Either way, Courtney recommends this hike for its wild, gorgeous views of the Pacific.

Traipsing along the bluffs directly above the ocean, you traverse redwood and pine forests, starting in the Marin headlands and hiking seven miles to the sleepy bedroom community of Muir Beach, continuing on to the taverns and inns of Stinson Beach, and  the rural environs of off-the-tourist-radar Bolinas, Olema, and famous Point Reyes.

In Muir Beach, you’ll hunker down at The Pelican Inn, a remodeled roadhouse with a fun little pub dishing up classics like fish and chips, or you can stop into the inn’s more upscale restaurant, which serves prime rib with Yorkshire pudding and the Full English for breakfast, powering you on for the hike to Stinson Beach.

San Francisco to Half Moon Bay

Difficulty: Easy, though the first day is a 13.5-mile hike

Starting on Ocean Beach, this four-day hike will take you 30 miles total, with 13.5 miles on the first long day taking you down to Pacifica.

On the second day, you ascend to Mount Montara, climbing through eucalyptus forest and into open grasslands, with expansive views to the north and south.

Next stop: Montara, which hosts a wonderful hostel called the Point Montara Lighthouse Hostel, housed in—yes—an old lighthouse perched along the cliffs on a picturesque stretch of the ocean. There, you can choose between a private or bunk bed room.

The following day, you can hike all the way to Half Moon Bay, or stop halfway in Pillar Point. If you do the latter, it’ll be four miles for the first leg to Pillar Point, and four and a half miles for the second leg to Half Moon Bay. You’ll hike past the Fitzgerald Marine Reserve, with coastal bluffs and reefs below that you can descend to explore. They include fascinating tidepools and bird life, including seabirds and harbor seals.

On the third day, the walkabout has you pull over at Moss Beach Distillery Restaurant, which was a speakeasy during Prohibition where Canadian rum runners would dock below and unload shipments of booze for San Francisco. Overlooking the clear water of the protected cove, Courtney recommends you dine on a meal of fried shrimp, steamed clams, and local beers. This hike abuts some urban centers, but out on the beach, you’re cut off from urbanity and nestled in the sand dunes and cliffs with coyote brush, prickly pear, and California buckeye. Courtney says that this hike broadened his definition of wilderness, as he walked along what he calls “this wild and untamed force of nature,” the beach and the ocean. “It gives you a feel of what the coast was like before people moved in.”

Though some of the beach areas you’ll traverse are great for people watching, this hike also offers unpopulated stretches where your only company will be many types of seabirds and dolphins.

On the first day, you’ll hike seven miles from Newport to Crystal Cove, a small state beach where a community built in the ‘30s and ‘40s offered small beach houses that later fell into disrepair. Those small cottages are now renovated and, though they’re so popular they must be reserved months in advance, offer a nostalgic flashback. Each cottage is unique and one renovated cottage hosts a restaurant called The Beachcomber, which serves seafood pastas, short-rib sandwiches, and robust breakfasts from a sun deck facing the beach.

On the third day, you’ll hike down to Dana Point, then leave the beach and hike up to Dana Point Preserve, a large acreage of coastal bluff preserved with original flora.

For all this beach hiking, Courtney’s commenters on his website forum have discussed the type of footwear they prefer. Though Courtney prefers light boots, some of his readers wear tennis shoes, sandals, or trail runners. Either way, Courtney recommends bringing your bathing suit to stop and take as many dips in the surf as possible. By September or October, the ocean has really warmed up for this hike, where you’ll pass a number of beautiful state beaches and hike through Torrey Pines, a unique state park with the rarest pine trees in the world. Though you have to be willing to hike a long expanse with 300-foot cliffs, you’ll encounter quaint little towns with cozy little inns and restaurants on this walkabout.

In Del Mar, you’ll stay at the Del Mar Motel on the Beach, a classic, funky 1950s Southern California motel, where you can walk out of your room and directly onto the sand. The motel provides chairs, umbrellas, and boogie boards, and if you walk up a block into civilization, you’ll find restaurants galore.

On La Jolla Shores Beach, you can swim with leopard sharks from June to December, with the experience peaking in August and September. Measuring only up to five feet long, they are not aggressive, and can even prove a bit shy, but will gracefully swim around wading tourists’ legs. Best time of year: Once the snow melts and trails open in the back country until the first snowfall. Check the park site’s weather conditions.

Temps: Hotter and drier than the other Northern California hikes described here, but not super hot, Courtney says.

One of our least visited national parks, Courtney touts Lassen for its dramatic landscape of steaming geyser fields and boiling lakes. It last hosted an active volcano in 1917 and still bears witness to a lot of geothermal activity. Ringing the fields are rugged mountains, raging rivers, and powerful waterfalls.

This hike takes you to the southeast corner of the park, where you’ll find Drakesbad Guest Ranch, powered by kerosene lamps. Hearty meals of salmon and burgers await you in their warm wood dining room. You can horseback ride or fly-fish there, and black bears wander near the grounds at night, causing the corralled horses to whinny from time to time. The lack of light pollution means that when you take a nighttime float on your back in the ranch’s hot springs-fed swimming pool, the stars put on a show.