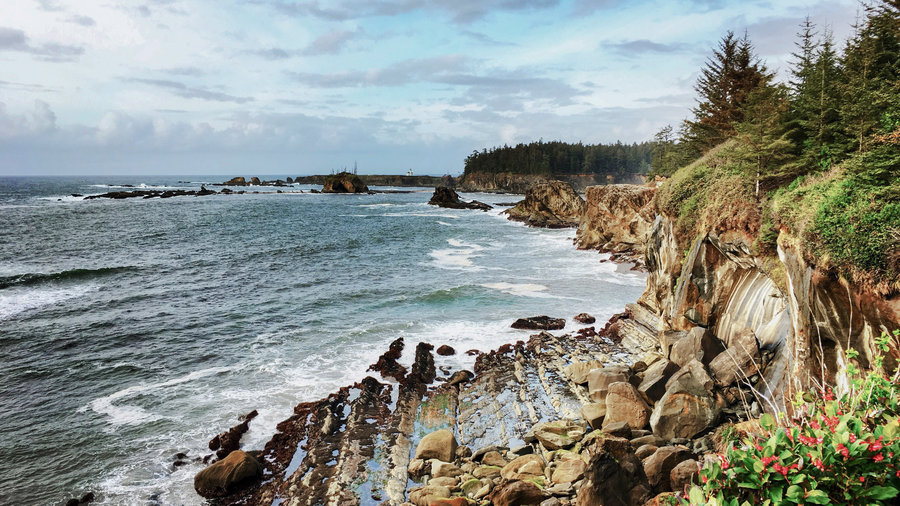 If you think of a lighthouse keeper as salt-sprayed, squinting, and talking like the sea captain on The Simpsons, GayLyn Bradley comes as a surprise. She has the soigné aura of a successful real-estate agent. But on the day I visit, her smart red suit is decorated with gold buttons imprinted with lighthouses. “There is a mystique about lighthouses,” Bradley says. “Every one has its own story.”

They do. And among Oregon lighthouses, the Umpqua River Lighthouse’s story is perhaps the most interesting, thanks in large part to Bradley.

The Umpqua River Lighthouse rises above Winchester Bay on the southern Oregon coast. When you visit, you take a self-guided tour through the station’s museum. Here you see a photo of the first lighthouse ― which was built in 1857 and flooded seven years later ― and the completion of the second, in 1894. “For 31years there was no lighthouse,” Bradley says, in the tone of someone saying that for 31 years there was no food. “We had nine big wrecks.”

Then you tour the lighthouse itself with docents. Umpqua wasn’t the hardest posting on the Oregon coast, Bradley says, but the dangers were there. She tells the story of early lighthouse keeper Marinus Stream. “Every day he would write in his log book, take note of the weather, unusual events. On one day you see a new entry, in different handwriting. Very soft, feminine. His wife.’Mr. Stream drowned at 1 p.m.’ He had gone out on a rescue.”

The highlight of the tour is climbing 60-plus feet to theFresnel lens ― the 2-ton, 616-prism lens that flashes one red and two white beams of light 21 miles out to sea. What makes Umpquaal most unique in the world is that you get to stick your head inside the lens. The sensation is like what you imagine dancing inside a kaleidoscope would be: dizzying, unrepeatable.

Experiences like that make you think lighthouses should be agrowth industry. But in the era of global positioning satellites, they’re deemed superfluous. Even in Oregon, which promotes its lighthouses like crazy, lighthouse after lighthouse has gone dark, too costly to maintain. “Lighthouses are like kittens,” I’m told.”Everybody loves them. Nobody wants one.”

Which is where GayLyn Bradley comes in. When she moved to theOregon coast a few years ago, the Umpqua River Lighthouse was in poor condition. “I don’t do bored well,” Bradley says ― herexplanation for why she started working at the lighthouse, mowing lawns and then museum curating and, lately, working with Jeld-Wen Windows & Doors to donate historically appropriate windows to replace the battered ones that were letting in wind and rain. And thanks to her ― and to fierce community support ― the Umpqua lighthouse shines.

By late afternoon I have learned so much about lighthouses I think I am ready to go. Bradley says no. I have to see the lighthouse at night. “It’s the most beautiful thing you’ve ever seen. And I’ve seen the Sistine Chapel.”

It is late, and I am tired, but I return. In the dark the coast is gloomy. But here comes the light, flashing white, white, red, the beam sweeping across dunes and sea.

Because Bradley had primed me, I find myself thinking about theSistine Chapel too ― the section where you see God touching his finger to Adam’s. It’s a vision of inspiration and comfort, and so is the shining beam. Each flash says someone ― MarinusStream? ― thinks you’re important. Someone thinks you matter.Someone will steer you safely to shore.