These thirteen fascinating—and slightly spooky—ghost towns are the most well-preserved across the region. Please note that some attractions may be temporarily closed or operating at reduced capacity due to COVID-19 concerns. Please travel responsibly and practice social distancing.

These Western ghost towns are worth a visit whether you’re in it for the history, the nature walks or the chill down the back of your spine (if this is the draw, you may also want to check out the West’s most infamous haunted hotels). Some are a bit more off the beaten path than others, and they run the gamut from authentically deserted to artfully recreated, but each one has a fascinating story and plenty to see. Creative Commons photo by Nicholas D. is licensed under CC BY 2.0

After the 1862 gold strike at nearby Grasshopper Creek, Bannack boomed, drawing outlaws such as corrupt sheriff Henry Plummer and his gang of Innocents to this remote outpost in southwestern Montana. Walk the wide, gravel main street, lined by dozens of weathered wooden buildings, including the Hotel Meade, the jail, and the 1874 Masonic Lodge (which also served as the schoolhouse until 1951), and you can almost imagine the gunfights and robberies that once plagued the town, briefly the capital of Montana Territory. Silver, not gold, was what drew the first settlers to Belmont: specifically, a silver strike in 1865, though lead and copper were also mined in the area over the next 20 years. The Italianate design of the brick courthouse illustrated the town’s elevated status as the seat of Nye County—at least until the mines closed and the county seat was moved to Tonopah in 1905. The courthouse remains, though, and is being slowly restored. If you can get inside—tours are offered regularly throughout the summer—look for the graffiti attributed to mass murderer Charles Manson and his Family. (They’re rumored to have camped out in the nearly deserted town in 1969.) The road from Highway 395 to Bodie, in the Eastern Sierra, is 13 miles long; the last three are graded dirt. The town has water and restrooms but no gas, food, or campsites. After the town’s last holdouts gave up in the 1940s, Bodie’s remoteness became a blessing, helping to hold off looters until California’s state park system could, in 1962, step in and maintain a “state of arrested decay.” Almost 200 buildings remain, and many are chock full of everything from bottles of patent medicine to church pews and coffins. At the Standard stamp mill, where ore was processed into gold, you’ll learn how Bodie once rocked to a constant din so unrelenting that babies were said to cry on Sundays (the mills’ day off) because they weren’t used to the quiet. Today it’s quiet. Ghostly quiet. Montana’s most well-preserved ghost town, on BLM land 35 miles east of Missoula, boomed at the close of the 19th century, boasting four hotels, three livery stables, a school, several stores, and even a candy shop. But as Garnett‘s two main exports, gold and gemstones, became scarce, people scattered, and a fire in 1912 destroyed much of the area. By the end of WWII the town was abandoned. Today, visitors can explore 30 remaining buildings—some intact enough to be open to the public for interior viewing—and kids can pick up a scavenger hunt list from the visitor center (we actually recommend this for the adults as well). Nearby hiking and biking trails and trout fishing make this an easy day trip. At the end of a 60-mile dirt road deep in Wrangell­–St. Elias National Park & Preserve lie the onetime ghost town of McCarthy and, nearby, the deserted mills, machine shops, and bunkhouses of the Kennecott copper mine, which had its heyday in the 1920s (the mine produced $200 million worth of copper ore between 1911 and 1938). Much of the hulking red Kennecott complex, which spills over a swathe of mountainside, is open to park visitors, though stabilization work is still going on and no doubt will be for the foreseeable future. Meanwhile, McCarthy, where the Kennecott miners would go to let off steam, now serves as a base camp for mountain climbers and other adventure travelers. A smaller, manmade version of the Grand Canyon, located in California’s Gold Country, Malakoff Diggins is the site of the state’s largest hydraulic mine, where mountains of earth were scoured by water cannons in the quest for gold. In the 1850s, the town of Humbug grew up nearby to supply the miners; it grew to include a sawmill, saloons, and breweries. By the turn of the century, though, North Bloomfield, as it had come to be called, was emptying out. The population rebounded during the Depression, with onetime residents seeking a free place to live, but when World War II started in 1941, they left again to find work. By 1950, the town’s inhabitants numbered fewer than twenty. Today, the remains of North Bloomfield include a restored general mercantile, schoolhouse, livery stable, church, and pharmacy. This living museum gathers more than 25 historic structures from across the region to tell the story of the rugged lives of trappers, explorers, early homesteaders, and pioneers. Old Trail Town is a ghost town for those who love a good story; the history here is robust. The many residential cabins all come with their own record of who lived there (and in some cases, what they did and how they died), and sit alongside a post office, school, carpentry shop, blacksmith shop, saloon, and more. In addition, the town boasts a fascinating graveyard and four beautiful bronze memorials to famed mountain men like John Colter and Jedediah Smith. East of Death Valley National Park, on BLM land off State 374, you’ll find the ruins of a turn-of-the-century gold boomtown that, at its peak, had a population of nearly 10,000. Just four years after Rhyolite was founded in 1904, the town boasted a marble-floored bank building, a railroad depot, and a brick schoolhouse complete with auditorium, electric streetlights, and three public swimming pools. Following the banking panic of 1907, though, the East Coast investors behind the dozens of mining companies operating in the nearby hills pulled out. By 1916, the streetlights were dark, and by 1920, only about a dozen residents were left. Street names in Silver City tell stories. Avalanche Avenue recalls the Owyhee Daily Avalanche, the first daily newspaper in the Idaho Territory, and Dead Man’s Alley was indeed the scene of one stabbing and two shootings in the late 1800s. Of course, ever since the silver boom of the 19th century went bust, life in this surprisingly well-preserved mining town 70 miles southwest of Boise has been pretty quiet. The newspaper is long gone—probably because there was no more news from Dead Man’s Alley. These days Silver City is a part-time ghost town: a summer population of about 25 families and a steady trickle of visitors exploring Owyhee Mountains backroads are all that keep it going. Located in the town of Fairplay and surrounded by the Rocky Mountains, South Park City re-creates a late-19th-century gold-mining town. Some of the museum’s 35 buildings are on their original sites; others come from other, now-vanished mining camps such as Buckskin Joe, Eureka, and Tarryall that once dotted the 900-square-mile South Park basin. These include the Summer Saloon, the railroad depot, and Merriam’s Drugstore (notice the early medicines in Victorian bottles). Here they stand, on this high Wyoming plain where the Wind River Range is a shadow in the north—the old stamp mill, the Miner’s Exchange Saloon, the South Pass Hotel—rough-hewn mementos of those few years when South Pass City was a place that might make you rich. In 1867, The Chicago Times reported, “The mines near South Pass are still drawing a large number… their richness is undoubted.” The busiest of the mines was the Carissa, for which the 1890s saloon (still standing) was named. Today, decades of restoration work have made this one of the most authentic ghost towns in the West. Tour the town’s interpretive center (a former dance hall), buy penny candy and dirt to “pan for gold” at Smith-Sherlock General Store, or book a stay at the nearby Miner’s Delight B&B in Atlantic City, which occasionally offers a “night shift” tour of the old gold mine accompanied by a scotch tasting. Four sizable mines fueled the rapid growth of St. Elmo (including the famed Mary Murphy Mine, which was responsible for pulling $60 million worth of gold from the area). The town was both a mining village and railroad stop in the 1870s, but the boom was inevitably followed by a bust—including the closing of the railroad in 1930—and today just 24 original buildings remain standing. The town is reportedly haunted by Annabelle Stark, a member of the last family to live there full-time; if you’re not afraid, you can stay in one of the rustic cabins in town, rent four-wheelers, and peruse the souvenirs in the old general store. 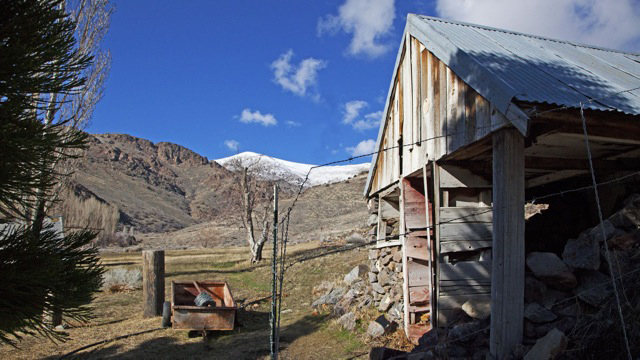 There’s not much at all left of Unionville, off I-80 in Pershing County. The town was founded in 1860, and at the height of its silver-mining boom (which ended in 1870), it had about 1,500 inhabitants. Now, it has about 20, and there’s only one real business: the Old Pioneer Garden B&B Guest Ranch. However, Samuel Clemens spent a few weeks here in 1862 prospecting for gold (unsuccessfully, unless you count the books he wrote as Mark Twain after giving up on this get-rich-quick scheme), and you can still see his now-tumbledown cabin, protected from souvenir seekers by a barbed wire fence.