This Colorado Artist Is Painting Western Landscapes Inside Altoids Tins

Remington Robinson captures the beauty of Colorado and beyond in miniature Altoids tin paintings. 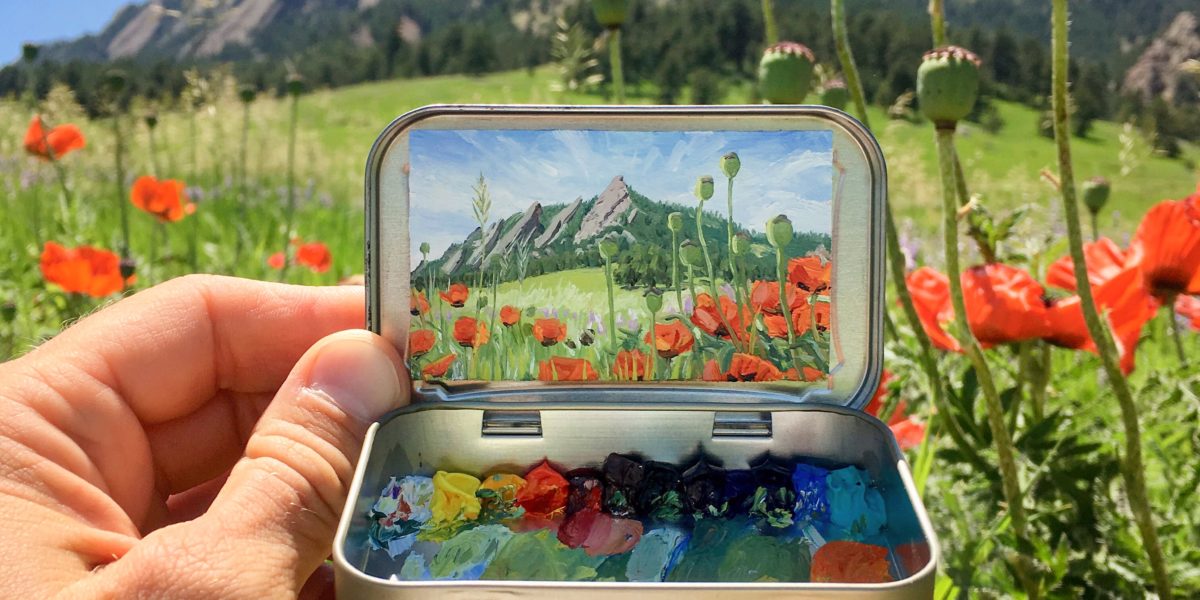 Colorado artist Remington Robinson painted poppies at the base of the Flatirons in an Altoids tin.
Written by Kristin Scharkey July 27, 2021
Share this story

Remington Robinson almost always has a few Altoids tins in his car. That way, if inspiration strikes—and the light’s right—he already has a miniature canvas to paint en plein air.

The Colorado artist has gained a massive following for his miniature oil paintings on the inside of the mint containers. He captures the flora, fauna, and landscapes of Boulder and beyond—each painting typically takes a couple hours. Think poppies at the base of the Flatirons and an eagle’s nest at the Continental Divide. He once spent seven hours capturing a Guanajuato city scene.

“I just love nature and studying the natural laws,” Robinson says. Painting is “a way of really meditating on that and re-creating it in a different form.”

Each Altoids tin includes the remnants of Robinson’s paint palette in the bottom lid. A dried “little artifact,” as he’s explained on social media, that’s part of the piece. “It’s showing the process, in a way, for anybody who wants to see it,” adds Robinson, who says he’s painted more than 400 Altoids tins in the last few years.

And no, he doesn’t eat all the mints.

The process starts with a bulk purchase of Altoids tins on eBay, though sometimes friends gift him with theirs, he says. The artist, who also creates murals in the greater Denver area, then primes a piece of wood white and attaches it to the inside of the lid using micro velcro. When he’s done, Robinson signs his name with a pencil sharpened as thin as a needlepoint.

Robinson isn’t the only artist painting in miniature form. The Whiskey Painters of America, for example, formed in the late ’50s and now call themselves the “most unique and exclusive miniature painting society in the world.” Perhaps due to social media, even Altoids are a somewhat common medium: Shops on the online shopping platform Etsy are selling paint tray organizers that fit directly into the bottom of the tins.

Robinson is more than happy to offer tips to artists who want to try their hand at the style. “If you’re going to paint small, make sure that your brushes have a good tip,” he says. Try Princeton Artist Brush Co.’s Velvetouch brush series, and either Winsor & Newton’s oil paint or the brand’s faster-drying Alkyd oils, he said.

Meanwhile, the Colorado artist will continue to make his own mark on the form.

“He does just beautiful, beautiful work that is typically very ultra-representational,” said Mary Horrocks, executive director of Open Studios arts organization in Boulder. “His (ability to do) those fascinating small paintings, it just shows what a consummate artist he is.”

Want your own Remington Robinson original? Altoids paintings can be purchased through Sugar Lift gallery or on Robinson’s website.

8 Ways to Enjoy the Rockies in Fall