Lace These Boots, Pick Those Apples, and More Things to See and Do This Week Forty years ago, a new textile called Gore-Tex was added to the quiver of outdoor gear designers, offering a semi-permeable membrane that promised to keep moisture at bay, but let your own perspiration pass through. The Danner crew seized the opportunity to roll out the Danner Light, a riff on heavier hiking-boot predecessors that offered durability and elegance, but at an ideal weight. This new colorway commemorates the anniversary of that iconic boot. Light, fast, and versatile. —Matt Bean, editor in chief

The Loo for You (and Me, and They/Them) 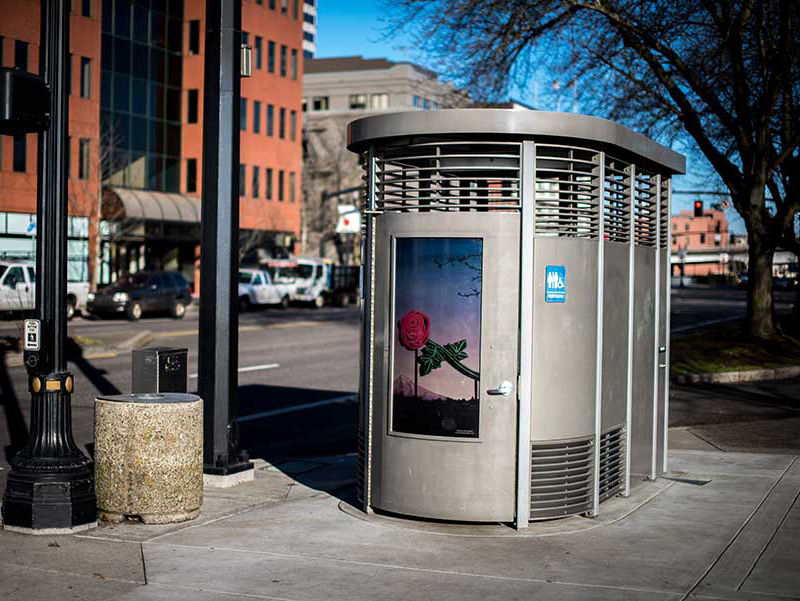 You can usually count on Portland to be on the cutting edge of cultural phenomena, and lately, the good people of the Northwest have turned their disruptive eyes on the public restroom. The revolutionary plan is as simple as it is radical: Make all 600 Portland Loo public restrooms open to everyone. Full stop. They’re intended to be used by only one person at a time, so why not? Portland Loos are completely gender-neutral, which has the happy effect of making life a little less stressful for the transgender and non-binary community. Not that you have to be part of that community to appreciate the policy—anyone who has ever needed to accompany a child of the opposite gender into a traditional space, or braved the ladies’ room line at an Indigo Girls concert will get it. The Loos are free of charge, cleaned several times a day, and designed to discourage drug use and loitering. Finally, a public bathroom that’s not filthy and preserves a visitor’s dignity—what will those wacky Portlanders think of next? —Nicole Clausing, digital producer

A Sleeping Bag for Your Feet? Yes, Please

All aboard the Ember Express. First stop: cozy szn. 📸: @steveakation

I just checked the forecast for my weekend camping trip in the Sierras—the trip that was meant to be our summer swan song, jumping into snowmelt-fed lakes and sitting barefoot around the campfire—and discovered that the daily highs will hover around the low 60s before the temp drops overnight to the mid-20s. Where did the warm weather go so fast? I like to be a well-prepared camper who can go with the flow—and I love any excuse to buy a new pair of shoes—so I think this is the year I’ll invest in some Ember Mocs. Teva’s sneaker-slipper hybrid has been on my radar for a while; a quilted slip-on in rad colors (thank you, Teva, for not making your women’s shoes in pink and periwinkle) that’s essentially a sleeping bag for feet. As an added bonus, they only weigh 18 ounces per pair and are squishy enough to shove into a pack for a bit of backpacking luxury. So I guess I’ll trade that warm-weather swan song for a cozy new beginning: new season, new shoes; not bad. —Kate Wertheimer, travel editor

It’s that most magical time of year again: Oktoberfest! For German-Americans such as myself, wearing a dirndl, drinking liters of doppelbock out of a glass boot, and singing Ein Prosit with a couple hundred strangers sometimes feels like my only link to my heritage (even though my people came from Frankfurt, not Munich). Last weekend I fested with the best of them at my friendly neighborhood Portland bierstube, Stammtisch, and this coming weekend, their sister spot Prost will have their Oktoberfest celebration. Oktoberfest happens throughout the second half of September and into the first weekend of October as a celebration of the harvest. Oregon’s biggest celebration is in Mt. Angel (and happened a couple weeks ago), but I really like being able to just walk home after downing my body weight in Paulaner. —Heather Arndt Anderson, garden editor Autumn is my favorite season for so many reasons, with apple picking ranking high on that list. While there still isn’t any fall foliage to speak of yet and the temps are still summery, Northern California is spectacular in September and several notable U-pick orchards offer up a delicious harvest. My family has loved the experience at Gabriel Farm in Sebastopol for several years running, but we decided to switch it up this time and go somewhere a bit closer to SF: Chileno Valley Ranch, in northern Marin County just outside Petaluma. This 600-acre grass-fed beef ranch includes a small orchard that produces over a dozen varieties of apples and several varieties of pears. We had a great time harvesting Senshu, Mutsu, Pinova, and Candy Crisp apples (you can probably guess which one my kids were most excited about), set against a very northern Marin backdrop of rolling hills and grazing cows. The leaves might not have changed color, but the rustic farm vibes gave the day the fall mood it deserved. We celebrated by driving home to SF and immediately baking a pie, causing me to declare that “orchard-to-pie-plate > garden-to-table.” —Jessica Mordo, associate digital director

Really thankful for this space

Painter Codie O’Connor just dropped onto my radar. The Austin-based artist is known for her sunset-toned color palettes, with abstract shapes, arches, and striped circles drawing in your eye. O’Conner mainly does commissioned paintings and creates murals, like her mural last year at Long Beach’s Prism Boutique, but she’s currently working on her next series to hopefully drop in October. Follow her on Instagram for swoon-worthy art and to find out when her next series drops! —Nena Farrell, associate home editor