Not Your Average Bunk Room: The Secret to Sleeping 15 in This San Juan Island Getaway

When a family of four bought a house on San Juan Island, they made sure no guest would be left sleeping on the floor. 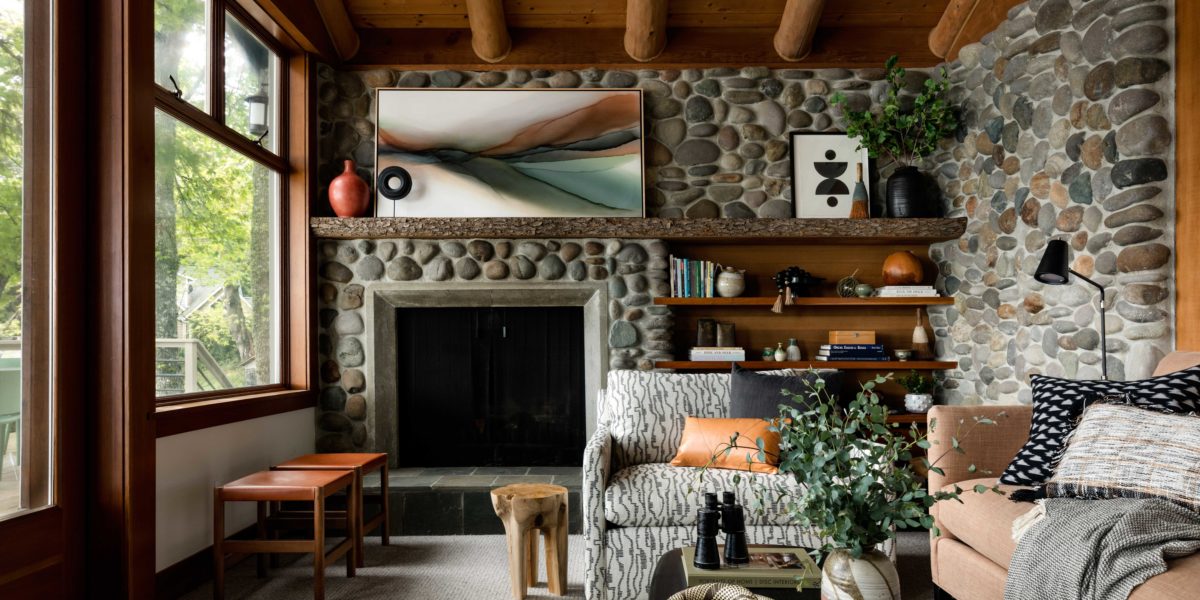 When I think of staying in a vacation home, the first thing that comes to mind isn’t relaxation among my closest friends. Instead, it’s waking up at 6 a.m., stuffing everything in the car, and flooring it so I get to the house first. All so I can call dibs on a bed before my so-called pals nab them all and I end up on an uncomfortable couch. (Or, worse, the floor.)

But such sleep warfare isn’t necessary at this three-bedroom San Juan Island hideaway. “The clients are a family of four—with two boys, 12 and 14—and they bought the house with the intention of having friends over,” says designer Amy Vroom of The Residency Bureau. “That’s why I put in comfortable sofa and chair sleepers along with bunk beds to try to maximize the sleeping space.” Somehow, she managed to do it all while keeping the home uncluttered and serene.

The house sits on Garrison Bay, but instead of going for “beach vibes,” Vroom skipped the faded white wood and turquoise so common for that look, and instead borrowed inspiration from the long driveway, which is surrounded by trees. “I tried to bring the entrance to the property to the forefront and work with a warmer color palette of oranges, greens, dark blacks, and grays as opposed to a water theme,” she says.

In the living room, to soften the wall of river rock, an ethereal commissioned painting by Kippi Leonard (via Seattle Art Source) keeps the eye moving. Meanwhile, a CR Laine sofa bed upholstered in S. Harris linen grounds the room. Honestly, if I were to sleep here, I’d be more than comfortable.

But it’s the bunk room that really steps up the guest quarters game. Meant to resemble a vintage summer camp, built-in bunk beds hug the ceiling, while another sleeper couch and chair beckon from below. Five kids can fit comfortably. Pegboard keeps the room fun and funky, but the main event is the built-in “nook” that can only be accessed from one of the bunks. “It was a pre-existing loft area, so I knew the kids would crawl up there and I had to make it safe,” Vroom says. “So I put in thick cushions and the rope railing. Now it’s where kids play games or read. It’s a magical place if you’re a kid.”

The primary bedroom, meanwhile, continues that nature theme. “The overarching feeling is that you’re surrounded by trees,” Vroom says. The effect is achieved with a leaf pattern on Milton & King wallpaper, along with a view overlooking the bay. The bed from Los Angeles-based Lawson-Fenning is accentuated with a body pillow in Kufri fabric.

The guest room, meanwhile, is the perfect escape with its sage green walls and custom headboard in Schumacher ticking stripe.

Throughout the house, Vroom used a lot of linen and wool. She also used performance fabrics or added fabric guard to the furniture upholstery where needed. “The house is meant to be used,” she says, while discussing the TV room with “Raccoon” artwork by Justin Kane Elder—the perfect place to watch movies (or take a nap).

One thing Vroom understands is that a large group of guests needs places to gather—like around the Design Within Reach table in the dining room, for example—but they also need places for quiet time. Benches with thick cushions in the living room are perfect for reading a book or napping; a nook in the primary bedroom has a reading chair and desk.

Vroom also brought her thoughtful approach to the outdoor dining area, where Vondom dining chairs invite you to have a big group dinner outside while enjoying the view. But there are also Adirondack chairs that overlook the tranquil bay, along with a tucked-away fire pit with a Brown Jordan sofa and lounge chairs that are the perfect place to unwind.

In all, this was a project Vroom had a blast putting together—partly because she got to stay on the island while working on the house. “I love the clients, I love the house, and I love that I got to spend time up there,” she says. “It’s so peaceful.”

Thanks to her designs, the owners and their guests not only get a respite from the city, they also get a great night’s sleep.

Design a Better Built-in, from Reading Nooks to Coffee Corners

9 Ways to Touch Up Your Guest Room