No Stove, No Problem: Here’s the Key to Making Easier Indian Dishes at Home

Consider catering to curries and stews over the stove a thing of the past! 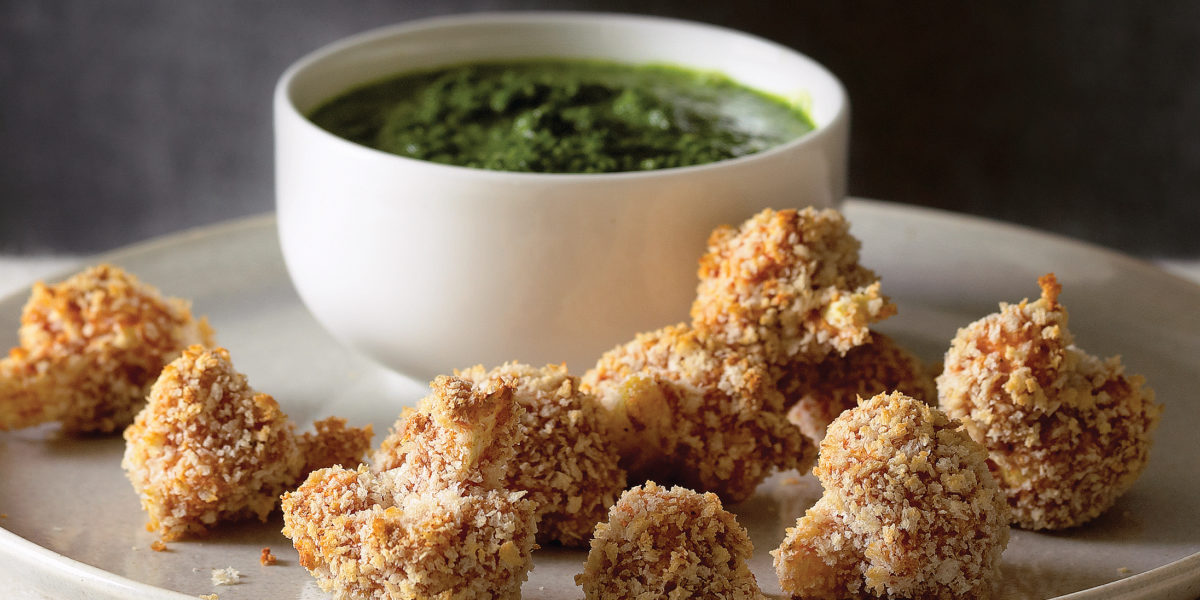 We all know how exhausting it can be to stand over the stove, giving a dish that needs a little extra nurturing occasional stirs and frequent heat adjustments. But modern appliances like air fryers and Instant Pots can help to take some of the grunt work out of labor-intensive meals. To expand our repertoire of air fryer and Instant Pot recipes beyond the common wings and fries, we got a couple of Indian-inspired recipes from Nakul and Arjun Mahendro, owners of Badmaash in Los Angeles.

At the Indian eatery, the pair of brothers combine their Canadian upbringing with the southeast Asian flavors their parents cooked for them at home, in dishes like chicken tikka poutine and chili cheese naan. At Badmaash, Nakul tells us they aim to “give people the feeling of what Arjun and I had as kids on Sundays when all of our friends would come over and have Indian food for the first time.”

For poutine at home, Nakul uses an air fryer to make the fries before tossing them with paprika, salt, and pepper, and topping them with cheese curds, gravy, and chicken tikka pieces—no need to bother with hot oil. He also shared tips for making a classic comfort dish (a favorite of Arjun’s) in an Instant Pot for easy sautéing and quicker cooking.

With so many of us cooking for crowds these days and taking advantage of meal prepping, these recipes and tips will have you adding more Indian flavors into your recipe rotation.

Toss It All into an Instant Pot

Instant Pots are an easy way to skip a few steps when cooking Indian food. “It’s going to maintain temperature, not have a hot spot on one side, and if you don’t have a nice big stove, this is an amazing way to make something delicious. All you need to be able to do is plug it in,” Nakul tells us. The different settings on Instant Pots allow for it to do more than just slow cook.

In a rajma chaawl recipe from Nakul, he preps the base for the beans by combining onions, ginger, garlic, spices, tomatoes, and tomato paste in the pot on the sauté setting. Once the flavors have melded together, he adds soaked beans and pops on the lid before switching the setting to pressure cook.

Thirty minutes later, the beans are cooked, the tomatoes have broken down completely, and the flavor of the rajma is as deep as if it had been cooking for hours (and you only have one pot to clean). “Normally you would bloom spices in a separate pan from the beans, but in the Instant pot you can do everything in one place,” Nakul boasts.

While this vegetarian recipe is a great jumping-off point for trying out a new dish in your Instant Pot, it’s easy to take other go-to Indian recipes from the stove to the pot with a few adjustments. “Just go slow and low,” Nakul suggests when converting recipes. “Get comfortable with a recipe on the stove first and adjust the flavors to your liking and then apply those steps to your Instant Pot settings,” Nakul adds.

If a recipe calls for sautéing onions until translucent, do that step on sauté mode. Instructions call for a low simmer uncovered? Just keep the lid off of the Instant Pot and, if it has a long cook time, pressure cook it once it reaches a simmer. Nakul also suggests letting things cool a bit before serving to let the flavors further marry together.

All About Air Fryers

“Everything that should be deep fried, we’re making it in the air fryer,” says Nakul. The way an air fryer can crisp just about anything up in a matter of minutes and without a gallon of oil never ceases to amaze me.

Nakul tells me that he only got an air fryer because his son loves French fries; Nakul and his wife wanted to make him healthier ones at home. But while making them, Nakul thought to use the appliance when making poutine, a popular dish on Badmaash’s menu.

The base of his chicken tikka poutine is french fries straight from the air fryer, which he urges folks to shake about halfway through frying to ensure even crispiness, tossed in a spice blend. The chicken that tops the fries comes together easily (though not in the air fryer) by baking in chunks after an overnight marinade in yogurt and spices.

This recipe is a great show of how you can transform a simple side, like fries, into a hearty dish that showcases multiple cultural influences. Nakul and Arjun grew up in Canada—the home of poutine—and the pair have put their Indian twist on the dish to show its versatility.

Samosas and spiced shrimp can come together with ease in the air fryer as well. Simply add wrapped samosas or seasoned shrimp to the basket of your air fryer and cook for 8 to 10 minutes or until evenly browned. Since shrimp is such a quick-cooking protein, an air fryer creates nice crispiness on the outside without overcooking.

Recipes to Get You Instant Potting and Air Frying

When experimenting with Indian flavors and converting recipes from the stove to an air fryer or Instant Pot, Nakul says “Indian food is about adjusting, knowing the basics, and how things react with each other.”

He has a few simple troubleshooting tips to keep in mind when making Indian food at home, “If a curry or stew has too much water or the flavors aren’t intense enough, keep it on a medium simmer with no lid to reduce the liquid. If you need to lighten the flavor of something, add in cream, butter, or yogurt. Lemon or sugar will help neutralize the burn of spice on your palate, which are used in a lot of Indian dishes as well.”

With these tips and the Badmaash team’s recipes to get you started cooking more in your air fryer or Instant Pot (or both), we’ve gathered a handful of other dishes below to continue expanding your spread.

1 of 10Courtesy of Badmaash

“This recipe comes from our cousin Mrinal,” Nakul tells us. “Not too long ago, Arjun and I made the drive up to the Bay Area to visit her. Knowing that we hate being cooped up in a car for five to six hours, she welcomed us with big hugs and had us sit at the dining table right away for dinner. She then served us rajma chaawl, with whipped yogurt and sliced onions. It was exactly what we needed, and hit every note of our own mother’s rajma. As we were both oogling over it, she kept laughing and saying that it’s nothing special, and she made it in the Insta Pot.”

2 of 10Courtesy of Badmaash

“Poutine is a classic French-Canadian dish of fries, cheese curds, and brown gravy. It is the ultimate Canadian comfort food and perfect after a night of drinking. We make ours with a heavy slap of Indian flavor; tossing the fries in a paprika masala, then we top the whole dish with tandoori chicken tikkas,” Nakul tells us.

With the right seasonings, a potentially plain bowl of legumes becomes supremely flavorful and comforting. Move this dal from the stove to an Instant Pot by pressure cooking for half the cook time. This will help break down the chickpeas and deepen the flavors of the dish.

4 of 10Courtesy of Nik Sharma

These spiced beef kebabs combine lime, ginger, coriander, mint, and more dried herbs to ensure spiced flavor throughout. To cook, they’re typically fried in a cast iron pot filled with hot oil. To avoid having to deal with popping oil and standing over the stove, cook these kebabs in an air fryer for 15 minutes set to 400°F.

Our shortcut recipe for vegetarian samosas uses store-bought dough; and they’re baked instead of fried. (Though baking can take away some of the crispiness we love from a deep fry.) Add the wrapped samosas to the basket of an air fryer and cook them until they’re evenly golden brown to bring back the crunch factor you want in a fresh samosa.

Coat each piece of this spice-infused shrimp in the marinade as instructed, but instead of putting them into a hot cast iron, lay them out in your air fryer for crispier shrimp! Since you won’t want to put the marinade liquid into the fryer, reduce it in a small saucepan and serve it alongside the shrimp for dipping.

Saag, a traditional north Indian dish of long-cooked spinach and spices, is made in 30 minutes with our speedy recipe. Cooking quickly on the stove can, at times, take some of the depth away from strong spice flavors. So, spend the same amount of time making this dish in an Instant Pot, and pressure cook for 15 minutes to create spinach that is soft and braised as opposed to slightly sautéed.

This curry gets its lively pucker from tamarind paste and leaves you with still whole chickpeas instead of stewed ones. By making this dish in an Instant Pot and leaving it to cook as long as you can, you’ll end up with a softer curry that showcases the bright tamarind flavor.

It can be a total pain to bother with heating a grill during a busy week, but the Indian flavors on this fish taste even better with a good char. Mimic the cooking process in an air fryer by cooking the salmon and potatoes in separate batches until they are both crisp around the edges and well-browned. Cooking fish filets in an air fryer will quickly become your new favorite method.

This healthy approach to pakoras involves breading cauliflower pieces in seasoned breadcrumbs and baking them instead of deep-frying, though we are certain the flavor and texture would benefit from air frying instead.