“Has society changed with black women surfing? Of course. Are we excited about it? Oh, more than you know.” 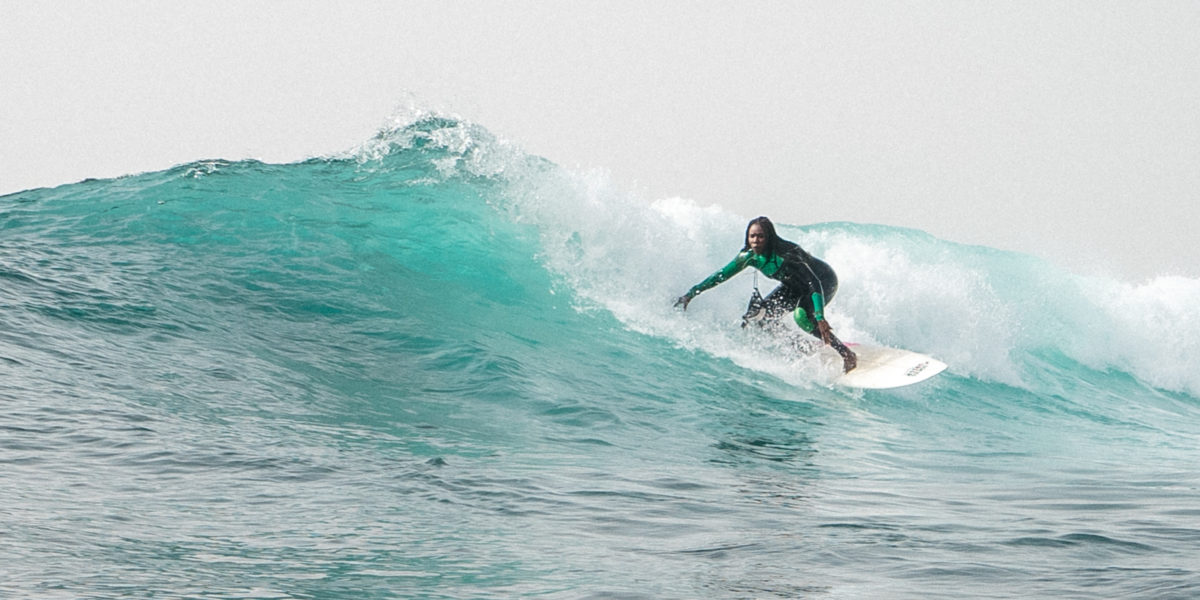 Photo by Giovanni Astorino
Khadjou Sambe of Senegal is one of the first members of Black Girls Surf.
Written by J.D. Simkins July 16, 2020
Share this story

Rhonda Harper was new to the surfing scene in 1987, when, leaving the beach one evening in California’s historic Santa Cruz, she returned to her Nissan 300ZX to find the words “Go home n—–” scrawled across the car’s hood in wax.

The message was clear, and it yielded a rude awakening for one who had spent more blissful teenage years on the pristine beaches of Hawaii’s North Shore, where Harper says she “never had any problems” because of her skin color.

“I didn’t even know there was a difference,” she says. “It wasn’t until I came to California that I realized that there was an issue with being Black.”

In the Golden State Harper has learned much from exposure to racism and localism. Few places wielded those antiquated customs more than the state’s beaches, where onlookers bewildered even by the concept of a Black female surfer would stop to stare, comment, or snap photos.

“It made it feel like a spectacle,” Harper says. “It’s very intrusive.”

Surfing’s own history, much like Harper’s trials as a participant, is a complicated one. Few activities emphasize tranquility more while historically coexisting—and oftentimes thriving—in the same theaters that have been mired in anything but.

From the sport’s appropriation from native Hawaiians, whom certain Christian missionaries in the 1890s referred to as an “infant race,” to the 1960s pilgrimage of foreign surfers to Indonesia, where wave riders enjoyed a tropical paradise just miles from where death squads were carrying out the mass executions of an estimated half a million people, surfing’s willful ignorance of flagrant human rights violations amid a quest for Zen has served as the ultimate paradox.

It wasn’t until an event in the mid-1980s that the sport would acknowledge its platform as one that carries political influence. Australia’s top surfer Tom Carroll was coming off of two world championships when he boycotted the South African leg of the 1985 tour to protest the country’s apartheid, a move that paved the way for future generations of surfers to maximize the impact of their platform.

Thousands of miles away from Carroll’s historic moment of resolution, Rhonda Harper’s involvement in surfing was just getting underway.

Harper’s road to launching Black Girls Surf was anything but linear. A stint in the U.S. Coast Guard, numerous jobs in the tech and finance industries, and a stretch as a celebrity designer all preceded her foray into the surfing world.

With a nod to her labyrinthine professional path, the protean Harper says it was her tour in the surf fashion industry that ultimately inspired the eventual realization of her organization.

“I say this all the time, but Roxy actually started all of this,” she laughs, “just from wanting to have surfing clothes that fit and represented me.”

Harper’s creation of a clothing line designed for Black surfers, however, yielded one considerable barrier.

“You always need that one surfer who’s popular to wear whatever it is you’ve designed,” Harper says. “There wasn’t anyone. So, I started doing research about the African diaspora. I was finding little pockets of surfers, but I wasn’t finding women.”

A well-calculated pit stop to become a credentialed judge for surfing contests supplied Harper with the connections necessary to organize the first ever Africa Surf International Contest—to be held in Sierra Leone in September 2014—which would at long last assemble candidates for Harper’s surf fashion line and showcase talent throughout the region.

On a visit to West Africa in 2013, Harper met Kadiatu Kamara, or “KK,” a mega-talented surfer who wound up being her country’s only female participant. But without competition to challenge KK, the contest appeared destined to fail before it could get off the ground.

“We started looking at surf camps,” Harper says, “and I saw a photo of this girl with a surfboard in Senegal. I reached out and they said she was an instructor there. That’s how we found Khadjou Sambe. I asked if she wanted to join this contest. She said ‘yes’ right away.”

But just as wheels began spinning for the 2014 contest, devastating news broke of the first significant spread of Ebola throughout West Africa.

“So, what do you do when you have surfers awaiting a contest that’s placed on an indefinite hold?” Harper says. “That’s how Black Girls Surf was started. We decided that we were going to try and bring Khadjou and KK to California to train.”

Of course, political elections, fluctuating immigration policies, border closures, and yet another relentless pandemic in the coronavirus have not made the transatlantic voyage an easy one.

KK, the club’s first member, remains in Sierra Leone. Khadjou, however, made it to California in 2018.

‘You Can’t Help But Be Excited’

“I’d take her to different locations where grown men are screaming at her or cutting her off, or older men are yelling at us about being there even though it’s a public beach. That was 2019—it was happening in the same place I dealt with it in 1987.”

Other curious beach goers were compelled to join in—a few at a time at first, then dozens. The influx of participants swelled the membership of Black Girls Surf beyond what Harper ever fathomed.

“There were so many inquiries about surfing and getting in the water,” she says. “Women were calling all the time and asking how they could get their daughter involved.

“When you look at somebody like Khadjou become an icon of Black women’s surfing—this very strong West African woman is out there on a wave and she’s killing it—and the response that people have to her, you can’t help but be excited about that.”

After launching with only two members—KK and Khadjou—Black Girls Surf now boasts nine camps, each of which are overflowing with so many membership requests that the club is struggling to fill instructor positions.

Harper, meanwhile, traveled in January to the camp in Senegal, where she’s been forced to remain due to travel restrictions implemented in the wake of the COVID-19 outbreak. But it’s been a blessing in disguise, she says.

“I think one of the things that is so good about [remaining in Senegal] is I’ve been able to really focus on the girls,” Harper says, adding that there are now upwards of 40 girls in the camp in Khadjou’s hometown.

“Little girls run up to you and they want to come surf with you. It’s all day, every day. Keep in mind this was once a patriarchal society where a woman’s request to surf would have always been rejected. Now you have parents asking if we can take their daughters into the program.”

Using Surfing to “Do Something Positive”

Just as Tom Carroll used his platform 35 years ago to protest racial injustice, athletes around the globe are increasingly taking active stances against racism and police brutality—activism ignited by the recent killing of Breonna Taylor and George Floyd.

Harper and the members of Black Girls Surf are no different.

“It was time to say, ‘Okay, how do we use this growth and this energy to do something positive?” Harper says.

“People want to control narratives and want to control other people. Instilling fear is a huge thing in white supremacy. The fact that people are starting to wake up to discrimination, you see that fear and how it turns into anger. So, we just try to keep it as peaceful as possible. You can see our faces. You can talk to us.”

Despite pushback, the international community’s response to the paddle outs has been overwhelmingly positive, putting Black Girls Surf on an even bigger stage and leading to the “Solidarity in Surfing” initiative.

“The diversity of these paddle outs was incredible,” Harper says. “I’m still getting requests to do more from people of all ages and backgrounds. I didn’t realize the diversity of surfing until joining in on these events.”

Similarly, organizations like The Surfrider Foundation have launched programs geared toward “fostering a diverse, equitable, and inclusive organization for all people who protect and enjoy the world’s ocean, waves, and beaches,” the organization’s website says.

“Our success and impact depends on learning from our community, standing in solidarity with our allies and working towards a more just future, both for our organization and the environmental movement as a whole.”

The influence of Black Girls Surf on the surfing community is irrefutable. Still, its capacity for rallying global surfers never dawned on Harper more than the day the club hosted one of its first global international paddle outs.

“I woke up early because I was just excited and participants in Indonesia had already sent me photographs of their paddle out,” she says. “I just cried. I knew right then that this was larger and it had nothing to do with just being Black. This is about humanity. It was enlightening for all of us.”

Progress, when it comes to surfing’s inclusivity, has been undeniable in the wake of recent tragedies, Harper says. The same industry that was eager to ostracize her in 1987 has undoubtedly matured in recent months, but the journey ahead remains long.

“Has society changed with Black women surfing? Of course. Are we excited about it? Oh, more than you know,” Harper says.

“It’s an ever-reaching sport that is evolving into something really beautiful and positive. I have hope for surfing now.”