Where you spend your money matters. 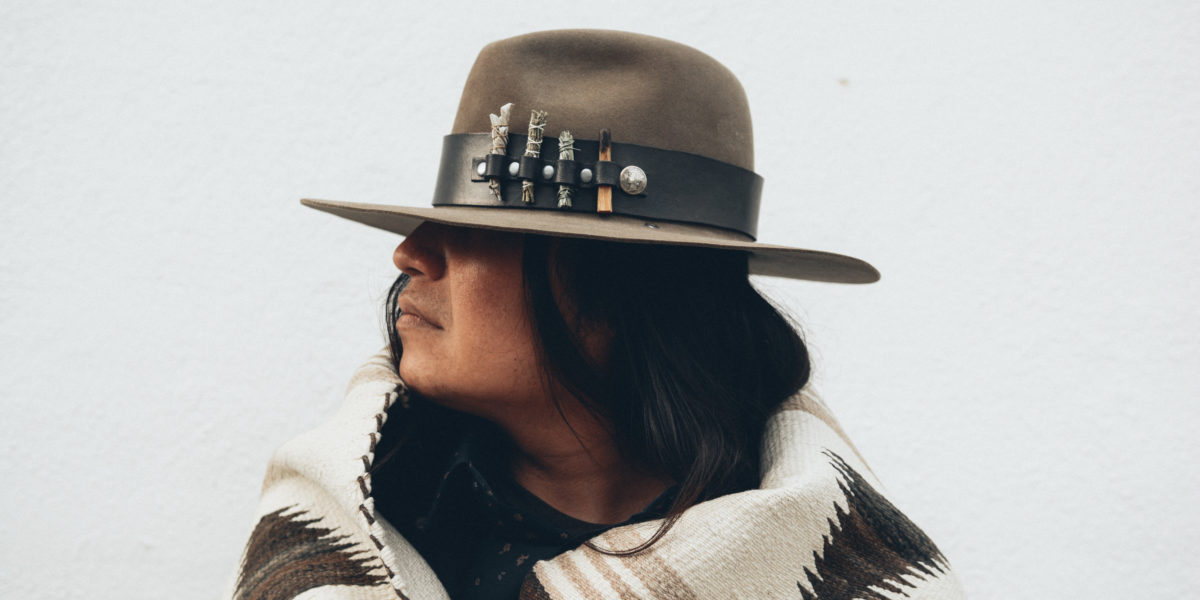 Scrupulous attention to detail comprises each hat from Thunder Voice Hat Co. Every decision is intentional, from tracking the history of reclaimed headwear and the intimate stories dispensed by previous owners to verifying the life and location of the animal used for its skin—primarily Southwestern beaver or rabbit.

Each hat, founder Lehi ThunderVoice Eagle says, is designed as if it’s going into an art gallery.

“Everybody knows fast fashion is cheap, and we knew going this route would be the harder [path], but I couldn’t find any other way to justify the process,” ThunderVoice says of efforts to recalibrate a fashion industry in which non-Indigenous manufacturers have long profited off of cheap re-creations of Native American designs.

“People have told us we aren’t good enough to exist in these spaces, but the pieces we create show we have just as much talent as those who once listed us as ‘merciless savages.'”

It is a meticulous practice consistent with a heritage—Lehi traces his back to Navajo Nation—that emphasizes sacredness even in the minutiae. There is a sacrifice that goes into the food on one’s plate, for example, the energy received from that sacrifice, and finally, determining what one does with the sustenance provided. It builds responsibility, he says, to live in a way to respect every life.

Whether immense attention to quality craftsmanship will see Indigenous artists through to the fashion circles of the upper echelon—there are recent examples of headway—remains to be seen. It’s an ongoing struggle, especially while pursuing success independently. But if you look closely enough, you’ll notice numerous artists gaining momentum, and with that, conversations that have been muffled reaching mainstream ears capable of accelerating Native American inclusivity. The Indigenous fashion and art scene should be theirs to guide, or, at the very least, it should be an industry approached with intentional consumer appreciation over product appropriation.

“With many reservations, the only way money can be made is through arts and crafts,” ThunderVoice says. “If we’re getting boxed out of that, the impact is we no longer survive.”

A Platform for Change

Kussman discovered her knack at a young age, and it became paramount while dealing with dyslexia and the educational struggles that accompany it. She excelled, she says, because there was no right or wrong way.

Yet Kussman’s outlet, one she markets through her Mean Right Hook online shop, was not always rooted in her Cherokee ancestry. Generations of forced assimilation and colonization ultimately left her family devoid of Indigenous traditions. Correcting that injustice, she says, became a priority when Kussman had her daughter.

“I wanted her to have family heirlooms she could cherish and pass on to her children,” Kussman tells Sunset, “and many more generations to come.”

Kussman’s foray into the world of Indigenous art left her wowed by the support system that emerged, especially from the community she had long admired peripherally. Her skillset of alluring silversmith work and graphic design eventually drew the attention of renowned blanket-making company Rumpl, which recently added Kussman to its ever-growing list of artists spotlighted through dazzling collaborations.

Similar to the attention garnered by Kussman’s talents, the work of Diné textile artist Naiomi Glasses kindled a collaboration with blanket maker Sackcloth & Ashes, which, as part of an in-house initiative to assist homelessness, provides one blanket to a homeless shelter for every purchase. Sackcloth CEO Bob Dalton was inspired by Glasses’ intricately designed wedge rugs replete with zig-zag patterns and scalloped edges, a style that, after nearly being phased out at the turn of the 20th century by trading posts and imported designs, has steadily resurfaced to reveal the ingenuity of those who came before.

“Weaving will make a life for you,” Glasses remembers her grandmother, Nellie, saying from their home on Navajo Nation. What the weaver and avid skateboarder didn’t foresee at that time was how it could serve her community as well.

As part of her arrangement with Dalton, who also collaborated with ThunderVoice, Glasses opted to donate 100% of the profits accrued by her blankets—they are currently available to purchase—to a Diné-run grassroots organization called Chizh For Cheii, or Firewood For Grandpa, which assists at-risk elders on Navajo Nation by providing firewood, medical aid, and home repairs.

Working with Sackcloth has “not only been a good way to shine a light on my art, but it’s become a platform to share the amazing work done to help Navajo elders,” Glasses says. “Something often taken for granted—a warm home—is now being discussed, and that only helps provide solutions.”

Remedying generational issues that extend far beyond the sphere of material appropriation is one of the many uphill battles Native American communities face, but for ThunderVoice, Kussman, and Glasses, these partnerships are a promising sign that there is a movement underway of consumer accountability.

“Ultimately, the conversation we’re talking about is: Who gets to profit off our culture and who gets to represent us?” ThunderVoice says. “The answer to that should be obvious….Art and fashion are beautiful means of entering that conversation without even using words. With our hats, there’s just something to them. That’s because we’re doing it our way.”

‘The Symbolism Is Us’

ThunderVoice spent his formative years in two starkly contrasted worlds. Oscillating between the Arizona wilderness and the bustling city of Phoenix, ancient and modern forged an identity with eyes forward and a heart tethered to the old ways.

Reflecting on these worlds came naturally through art, which ThunderVoice says pulled back the curtain on an Indigenous culture confronting many of the issues that, until then, he’d encountered primarily through the lens of an individual from Navajo Nation.

“I started connecting with artists from other tribes and realizing there were universal struggles between our experiences,” he says. “Even though we’re separated by miles, there are so many similarities, good and bad, even down to our sense of humor. It was almost like meeting family.”

ThunderVoice’s pivot to hat-making came in the wake of a stint helming an art gallery in Santa Fe, New Mexico. He admired the flat-brimmed styles worn by Navajo people of the past, a design he personally donned after acquiescing to his father’s many requests to ditch the baseball caps he’d worn out over the years.

The antiquated look earned ThunderVoice some playful teasing at first—he laughs now thinking of the younger ones calling him “grandfather.” But the look soon became his staple, his own way of reclaiming the old ways.

Between a growing portfolio of artwork and budding hat company—ThunderVoice Hat Co. also sells blankets, jewelry, footwear, and clothing—he developed a following, and with it, a platform to confront oppressive issues encountered by others like him.

Native Americans today are the descendants of men and women who have survived genocide, and through policies rooted in overt and covert racial biases that persist, that decimation, largely unrecognized, has in many ways continued to the present. Access to water today on reservations is scarce. Many of them are barren food deserts.

It was less than 100 years ago that Navajo children sent to government and missionary boarding schools were told they were evil. They were forced to cut their hair and risked beatings if they dared speak their own tongue. And yet, the continent’s original stewards, along with their invaluable forms of expression, persisted. This intimate connection to creativity and the beauty it inspires, then, makes the appropriation of such items inherently more harmful than dollars and cents could ever quantify.

“Even this idea of ‘art’—we didn’t have a word for that,” ThunderVoice says. “It was just a piece of our existence. What we consider arts and crafts today were just the way. There is no separation, and when you remove that, it removes the purpose of why we kept those symbols through boarding schools and through assimilation.

“We hold onto these pieces, because the symbolism is us.”