Make a summer escape to the West’s most beautiful lakes 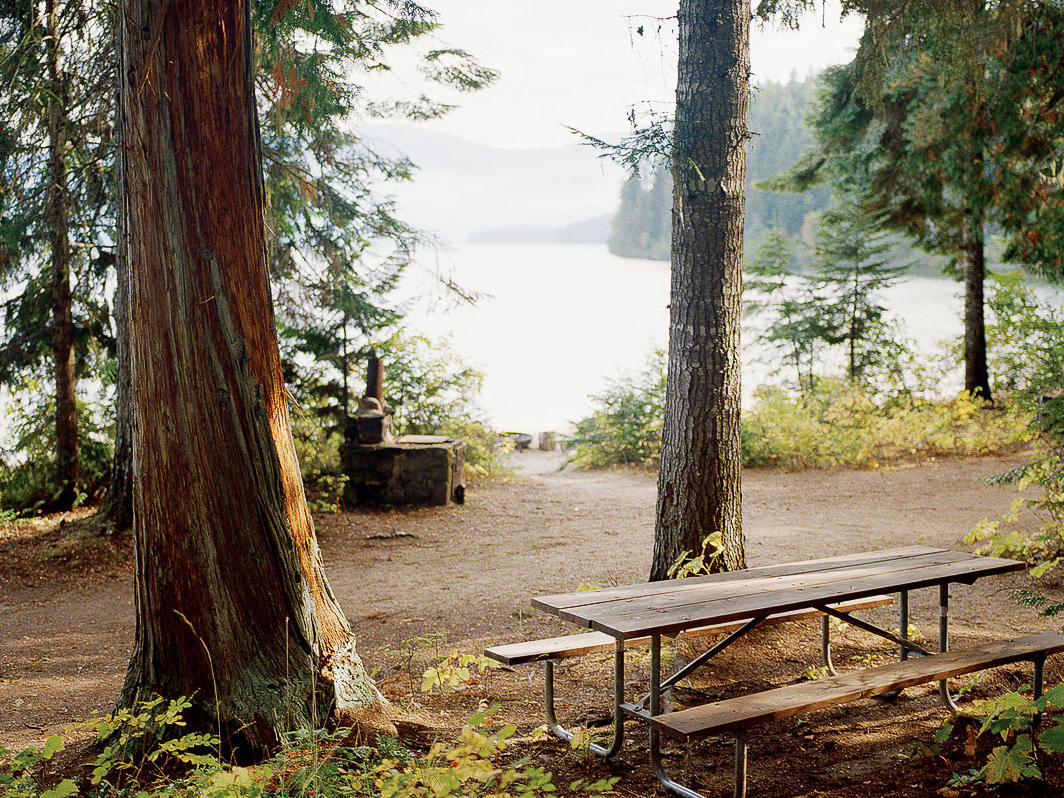 The lakes of northern Idaho―Coeur d’Alene, Pend Oreille, and Priest―are deep, blue, and busy. Scooped out during the Ice Age, the lakes now float yachts and kayaks. On the green shores, towns draw visitors to high-end resorts, restaurants, and lakefront bicycle trails.

Each lake has its legend: Native Americans told stories of monsters in Coeur d’Alene Lake; another monster, the Pend Oreille Paddler, is rumored to inhabit Lake Pend Oreille; and Priest Lake is linked to 1920s actress and filmmaker Nell Shipman, who established a wilderness movie studio in what is now Lionhead State Park.

And each lake has a distinct personality. As my family (husband, son, and daughter) and I discover, Coeur d’Alene Lake is bustling with boaters, golfers, and resorts.

Logging mills to links: Coeur d’Alene Lake
When French trappers came through this area about 200 years ago, they called the native people Coeur d’Alene―”awl heart” ― so impressed were they by the tribe’s sharp trading skills. Eventually, Coeur d’Alene the town became known for logging and mining, and for more than a century it was a gritty place. No more. Now the lake and the town draw golfers and boaters from Seattle and Los Angeles. As my kids and I bicycle the 24-mile North Idaho Centennial Trail, which runs along the lake, we see a shoreline dominated by the 18-story Coeur d’Alene Resort, with its 3,000-foot-long, geranium-lined boardwalk and yacht-filled marina. There’s also an 18-hole golf course with a floating green at the 14th hole.

Down at Coeur d’Alene City Park, a carnival atmosphere prevails: A man in a muscle shirt walks a Pekingese dog, a bride and groom pose for pictures, and families, like ours, dip their feet into the cool water. At nearby Independence Point, we board the Coeur d’Alene to tour the 25-mile long, 120-foot-deep lake as the breeze whips our hair and osprey dive into the water. (Another option is to see the lake by air, on one of Grant Brooks’s seaplane tours―these include 20-minute flights over Lake Coeur d’Alene, and longer trips over Lake Pend Oreille and other nearby lakes.)

We end our day sauntering along Sherman Avenue (named for General William Tecumseh Sherman, the namesake of the fort that is now City Park), with its art galleries and espresso shops. We are tempted by the Huddy burgers at Hudson’s downtown, but daunted by the crowds―so instead we choose a lake view and slow-roasted prime rib at the tony Cedars Floating Restaurant.

Lake Pend Oreille: art galleries, kayaks, and a restored theater
Forty-six miles north of Coeur d’Alene on U.S. 95, we cross the 2-mile Long Bridge into Sandpoint, at the northern end of 43-mile-long Lake Pend Oreille. Some think French trappers named this lake for the ear pendants worn by the Kalispel Indians; others think the name describes the lake’s hook shape. We drive through downtown Sandpoint, which, with its boutiques, espresso shops, art galleries, and restaurants, has the mellow atmosphere of a university town without the university.

These days Sandpoint is most famous for Coldwater Creek. The women’s clothing company is headquartered here and has a store in town; nearby are the shops of Cedar Street Bridge, Sandpoint’s answer to Florence’s Ponte Vecchio. I slip off to do some shopping while everyone else goes for a leisurely swim at City Beach. That evening we have dinner at Hydra, a small house turned restaurant, then see a series of short animated films at the restored 1927 Spanish mission-style Panida Theater. Renovated thanks to the hard work of Sandpoint residents, it’s one of the most beautiful little movie palaces in the West.

To see the lake the next morning, my kids and my husband board the Shawnodese riverboat at City Beach.

I choose a quieter alternative: a kayak tour with Jason Wiley of Full Spectrum Tours. As we paddle, the Selkirk and Cabinet Mountains shimmering in the distance, it’s hard to imagine the violence of the Ice Age floods that scoured out this 1,150-foot-deep lake.

I dip my paddle in and out, and I’m reminded of the lake that Sandpoint native Marilynne Robinson describes in her novel Housekeeping―of water that seems “spread over half the world.” This is a vast lake indeed, a fact recognized by the Navy in World War II, when it tested submarines in the deep water near today’s 4,000-acre Farragut State Park. That evening, as sunset stains the lake red and boaters pull up to the marina, we dine on crab-stuffed buffalo carbonade at the Floating Restaurant in Hope.

Hiking and stargazing at Priest Lake

Brown Cannon III
A fire on the beach warms the dusk.

We continue on to Priest Lake, the most northerly and least developed of the three. The 25-mile-long waterway is actually two lakes connected by a 2½-mile river known as the Thoroughfare. On the lower lake’s Luby Bay, we pull into Hill’s Resort, with its forest cabins, 18-hole golf course, and views of the Selkirk Mountains. Owned by the Hill family since 1946, the resort has hosted generations of families. “Each year,” says owner Teri Hill, “people arrive in the lobby, look out at the lake, sigh, and say, ‘I’m home.’  ”

Once accessible only by boat, the area exudes a woodsy tranquility: The 26,000-acre lake stretches before us, surrounded by forests of cedar and hemlock through which deer glide ghostlike, the silence interrupted only by the sound of the occasional motorboat.

We check into our cabin, hang up our bathing suits, and settle in for a week of inner-tubing, beachcombing, and hiking in the nearby Roosevelt Grove of Ancient Cedars. That night, we sit down to mesquite-seared tenderloin with wild mushroom-Cabernet sauce at the resort’s dining room, then walk back to our cabin. Water laps placidly against the lake’s shore, the air is pine-scented, the night sky bright with stars, and we, too, feel that we have come home.