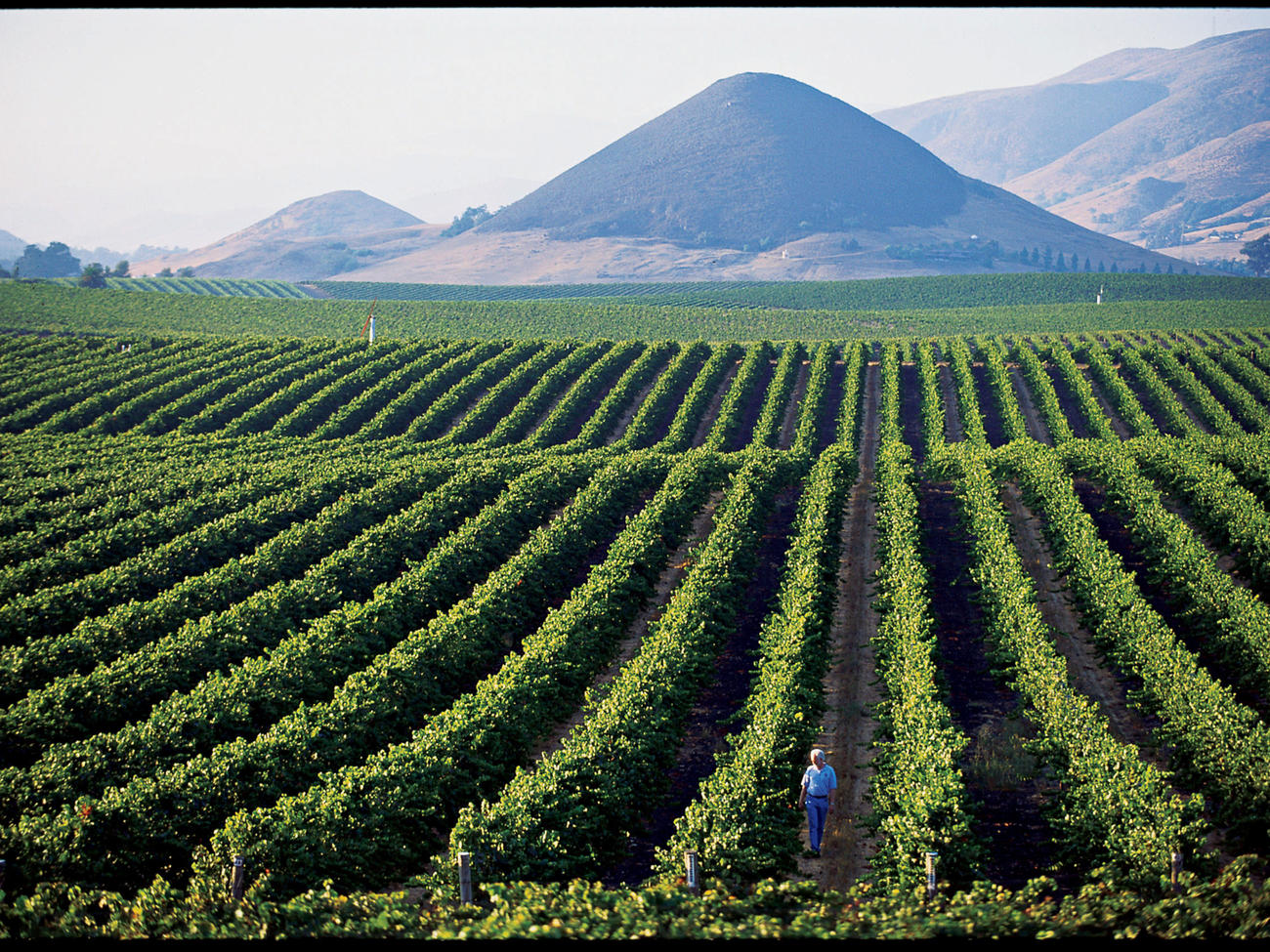 There’s an offbeat, tongue-in-cheek humor, reminiscent of the Blues Brothers, that runs between Terry Speizer and Michael Sinor.

Speizer is the owner of Domaine Alfred in the Edna Valley, on California’s Central Coast, and Sinor is his winemaker. It’s hard to know what to think when Speizer ― a large bear of a man who speaks in a sonorous voice that reminds one of Dan Aykroyd singing the theme from Rawhide ― tells you that their wines enjoy listening to certain kinds of music.

“The Pinot Noirs like Gregorian chants, but they hate salsa,” Speizer explains. Sinor nods in agreement, then adds, “They all hate salsa and techno.” “They” being the barrels of Chardonnay, Syrah, and Pinot Gris behind him.

Before you can think too much about this, Sinor suggests everyone go outside to take a look at their version of the Bluesmobile, a ’62 Shasta trailer ― which serves as a portable chicken coop ― that they got for $50 and a bottle of Chardonnay.

The trailer-cum-coop, which gets dragged around the vineyards so the chickens can eat bugs and weeds, is an important part of the winery’s somewhat peculiar production methods, which include racking wine during a full moon to take advantage of atmospheric pressure. “I’ll bet they don’t do that in Napa,” Sinor says, lifting a single eyebrow.

Winemakers probably don’t time their wine racking to the phases of the moon in the Napa Valley. But not being Napa is a big part of the Edna Valley’s appeal. The nascent wine region is located in a triangle bordered by Arroyo Grande, Pismo Beach, and San Luis Obispo, and it still retains a distinctive, backroad California charm. Vineyards were first planted here in the 1970s.

Today it’s home to more than 3,000 acres of vineyards and 30 wine labels, including 17 tasting rooms that run the gamut from a former one-room schoolhouse to the stylish Jack Niven Hospitality Center at Edna Valley Vineyard. At the latter, you can sample Chardonnays in front of picture windows with views of the valley’s most distinctive icon, Islay Peak, an ancient volcanic plug that rose from the ocean floor.

Next: Wines shaped by the sea

Wines shaped by the sea

And it is the ocean ― a little more than 5 miles away ― that accounts for both the cool weather, perfect for the Chardonnays and Pinot Noirs that the valley is known for, and the minerality that comes through in the wines’ flavors.

“This is an old estuary,” says Edna Valley Vineyard’s winemaker, Harry Hansen, as he walks the rolling hills planted in Chardonnay grapes, some on vines dating to 1973. “When they built the winery, they unearthed fossil shells.”

While cool weather–loving Chardonnays with lots of pear, lemon, and mineral flavors are what originally brought fame and accolades to the Edna Valley, it’s Pinot Noir and Rhône varietals ― Viognier, Roussanne, Grenache, and Syrah ― that are getting the most attention these days.

Winemakers will tell you there is no more difficult or fickle wine to produce than Pinot Noir. Says Hansen, “Pinot Noir is the Holy Grail to winemakers. She’s a woman ― the woman you fell in love with but who got away.”

Stephen Ross Dooley, a former Edna Valley Vineyard winemaker who now runs Stephen Ross Wine Cellars, recalls tasting one of Domaine Alfred’s first Pinot Noir vintages and saying, “My god, you did it.” Now the valley has several wineries ― Edna Valley, Baileyana, Stephen Ross, and Tolosa, among others ― that are doing Pinot and doing it well.

The Rhône meets the Central Coast

While the Edna Valley’s Pinot Noirs are a shared success story, interest in the area’s Rhône varietals can largely be attributed to the success of boutique winemaker John Alban.

“I started a winery because I fell in love with Viognier,” says Alban, who, when he planted his first 30 acres of the grape in 1993, practically doubled the worldwide acreage of the almost-forgotten varietal. Alban’s Viognier, as well as his Syrahs, have gained international attention ever since critic Robert M. Parker Jr. wrote a few years ago that the wines are “a reference point for what Rhône varietals can achieve in California.”

Though the quality of Edna Valley wines has matched and sometimes exceeded those of the Napa or Russian River Valleys, the crowds have not. “We’re sort of a mellow appellation, reminiscent of the Napa Valley 30 years ago,” says Baileyana’s winemaker, Christian Roguenant. Tasting rooms like the historic schoolhouse used by Baileyana might have only one or two couples leisurely tasting wines. Drive the two-lane roads midweek, and you’ll pass only a few other cars. As Speizer puts it, “The Edna Valley is all about the wine. When you’re in the tasting room, you’re 25 feet away from the vineyard, and there’s a good chance you’re actually going to meet the winemaker or owner.”