Save water: plant a yucca

Enjoy our next installment from Greg Starr, plant explorer and nurseryman. Remember—if his posts pique your interest, you can  shop onli... 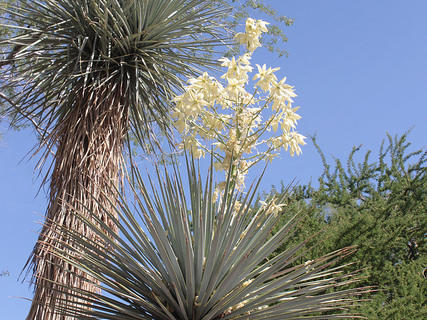 Enjoy our next installment from Greg Starr, plant explorer and nurseryman. Remember—if his posts pique your interest, you can  shop online through his mail-order nursery. 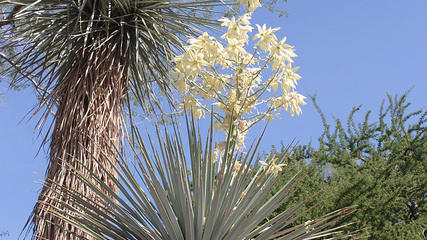 As we enter the hot, dry summer here in the desert Southwest, it is time to turn our attention to another water thrifty plant that can be a dominant feature in a xeric landscape.

Yucca rigida (blue yucca) is a Chihuahuan Desert plant that, when used in a mixed landscape, is an eye catching feature. This tall, stately yucca with moderately rigid, powder blue leaves looks great when planted singly or grouped in a landscape filled with several flowering perennials and small to large shrubs, depending on the size of your yard.

Ron Gass and I made a foray into the Chihuahuan Desert region in 1986 and as we crossed the dry, desert landscape of southeastern Chihuahua, we started to pick up a smattering of these tall yuccas growing among creosote bushes (Larrea divaricata). Ron and I then headed into southern Coahuila and encountered more Yucca rigida, again growing with creosote bushes and also silverleaf rain sage (Leucophyllum candidum) and a variety of cacti. 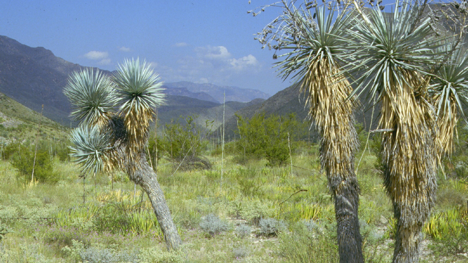 With their powder blue leaves, these Yucca rigida plants add contrast and color to the desert landscape. Photo by Greg Starr

In July of 2009, Scott Calhoun and I were returning from a trip to Oaxaca in southern Mexico coming home by way of the western states of Zacatecas, Durango and Chihuahua. Shortly after crossing from Zacatecas into Durango, we passed through one of the largest stands of gorgeous blue yuccas I had ever seen, prompting a stop for a photo op. 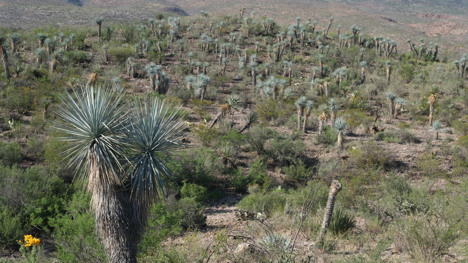 A hillside full of Yucca rigida in the desert of southern Durango, Mexico. Photo by Greg Starr 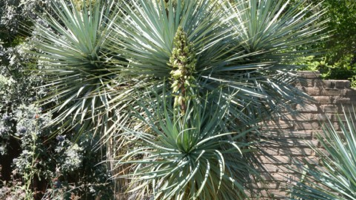 A flowering plant at the Tucson Botanical Gardens with flowering perennials and small shrubs. Photo by Greg Starr

Here in hot, arid southern Arizona, this yucca grows quite well in the full sun and is compatible with a variety of perennials such as brittle bush, desert marigold, desert verbena, globe mallow and penstemon. The creamy white flowers appear in late April or May, and are usually seen with part of the cluster buried below the leaf crown. This hardcore desert dweller would make a great addition to any xeric garden.