The Edwardian era may have ended with the coronation of George V in 1910, but in the English garden, Edward is still king. This was never more clear than in the gardens of the fictional estate of Downton Abbey, filmed at the real-life Highclere Castle in Hampshire, England.

The Edwardian garden was a celebration of the English countryside; the casting away of stringent Victorian formality was seen as much in the English garden as it was in the emerging social progressivism of the era. Respect was still paid to order and framework, but it was with a more laid-back, free-form approach within geometric constraints. Think wild, rambling roses growing languidly between strict lines of mathematically precise boxwood. In the words of the Dowager Countess of Grantham, Violet Crawley, “principles are like prayers; noble, of course, but awkward at a party.”

Fortunately, you don’t have to live across the pond (or come from generations of aristocracy) to grow a beautiful Edwardian garden of your own—just borrow a few of these style elements, and you can have the look of a Downton Abbey garden even in the West. The original English lawns of the 17th century were grown from chamomile, not grasses, as a way for the wealthy to demonstrate that they had land for the wasting, not needing it for buildings or food production. Bowling greens (long stretches of lawn) flanked by borders of perennials and low, neatly trimmed hedges were the signature of the casual style emulated in Downton Abbey’s gardens. Ditch the Kentucky bluegrass and return to the fragrant (and water-wise) chamomile to get the look of a lawn while minding the West’s need to conserve water. Precisely trimmed hedges and knot gardens provide the framework within which there is freedom for playfulness, as seen in these boxwood (Buxus) hedges interplanted with blue globe thistle (Echinops bannaticus).  The yew is also neatly pruned here (in the foreground, on the left), as is the common practice in the U.S. Azalea makes another nice choice for pruning into short hedges. As with all shrubs, hold off until spring for pruning to keep your plants healthy and strong. Shrubby herbs like lavender and sage make good choices for companion planting, and would have been right at home in Downton Abbey’s kitchen garden. Edwardian gardens were all about borders of tall perennials like larkspur, hollyhock, foxglove, Oriental lilies, and lupine, interspersed with lower-growing catmint, daisy, hosta, sweet William, forget-me-not, and cowslip (primrose). At Highclere Castle, the White Border Garden between the Monk and Secret Gardens is planted all in white: agapanthus, hydrangea, roses, and pear trees. Perennial borders are also much-loved in the West, as seen in these garden designs. Great for providing privacy while maintaining polite neighborliness, long, tall hedgerows filled with roses, privet, and hawthorn are hallmarks of English gardens. If you don’t have sprawling hillsides to delineate with living boundaries, fragrant roses like these ‘All Dressed Up’ floribundas still add instant charm along walls and fences, as well as in smaller gardens. Even smaller cottages (like the one inhabited by Carson and Mrs. Bates in the film) would have had a front yard framed in by casual hedgerows. In the West, achieve this look with native Nootka rose (Rosa nutkana) and Diabolo ninebark, (Physocarpus opulifolius ‘Monlo’), which is closely related to the native Northwest species. Downton Abbey’s gardens reflect trends not just from the past century, but 18th-century plant trends, as well. Mature Lebanon cedars surround the real-life Highclere Castle; Lord Grantham is seen walking his yellow lab beneath them in the show, and here, Lady Edith is seen strolling past them plaintively. The trees were planted over 200 years old, including some planted as seedlings by the castle’s original owner, Henry Herbert, First Earl of Carnarvon, in the 1700s. In the West, giant sequoia (Sequoiadendron giganteum) and redwood (Sequoia sempervirens) typically replace cedars as the stately landmark planting, but golden deodar cedar (Cedrus deodora ‘Aurea’) will also fill the bill nicely. 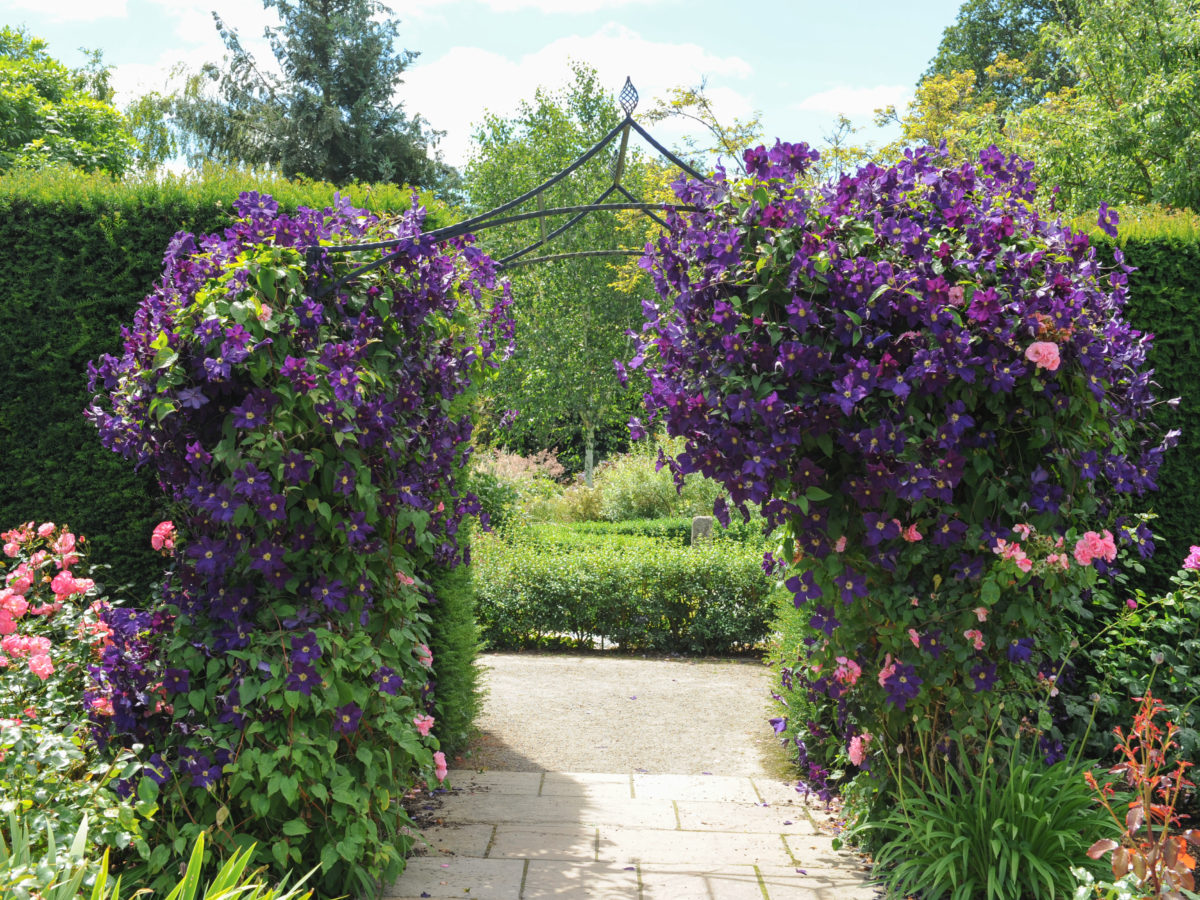 Pergolas, gazebos, and other architectural elements added structure and clean lines to the wild perennial borders as well as offering shade and seating for a moment of respite and a spot of tea. Clematis, climbing rose, and jasmine were all typical climbing perennials to plant on these structures, and all work well in the West. Flame lily (Gloriosa superba) and passion flower (Passiflora spp.) would add an extra touch of Western living to this English style. Around the Edwardian era (when the first season of Downton Abbey takes place), a few new garden trends emerged that are still widely seen today, like formal ponds and fountains. Even if you can’t quite accommodate a pond big enough for swans, you can make a water feature the center of focus. Even in droughts, water features can add a soothing tranquility to a garden; here are some of our favorite ideas for incorporating some water music into your garden. Though a wildflower meadow may seem out of sorts with the gardens of Downton Abbey, the current residents of Highclere, the 8th Earl of Carnarvon and his family, have designated a portion of the estate’s grounds as a wildflower meadow, to the doubtless delight of the grounds’ invertebrate population. Edwardian gardens loved the juxtaposition of strict architectural elements (like pergolas) with vining flowers; crisply trimmed boxwood hedges with soft perennials; controlled bowling greens with the wild abandon of a meadow. This playful, balanced approach will make any garden fit for Cicely Mary Barker’s flower fairies (the beloved Flower Fairies books were published in the same era as Downton Abbey takes place).