Plenty of hidden storage, and a show-stopping kitchen with a baby blue refrigerator, turn an 800-square-foot trailer into a family crash pad. 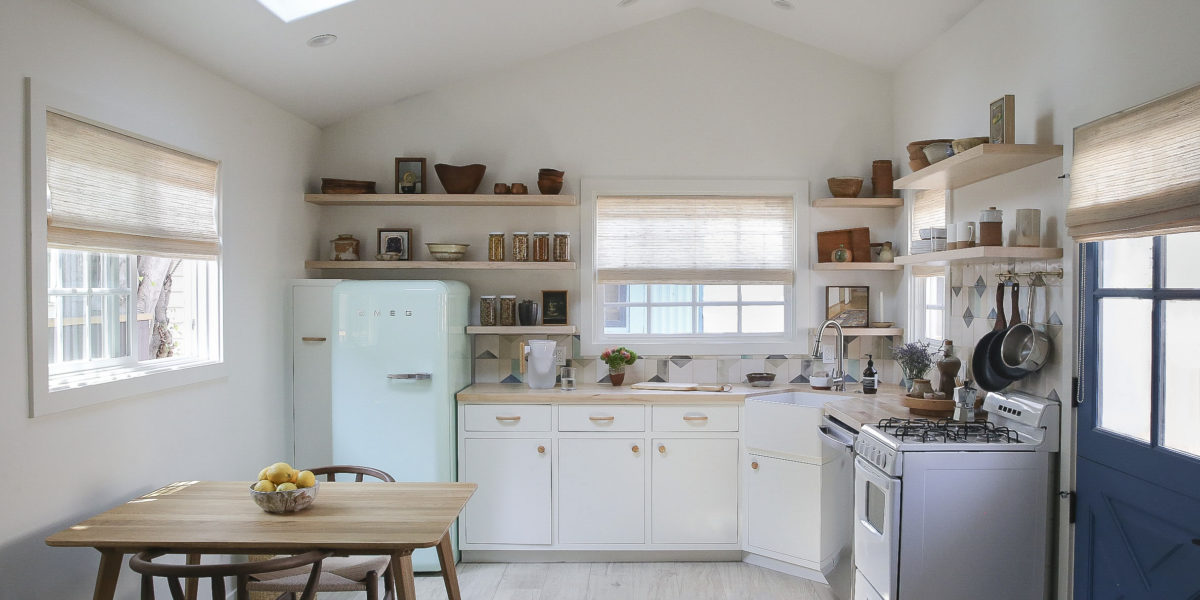 A blue Smeg refrigerator was the foundation for a family's Scandi-cool beach house.
Written by Christine Lennon November 24, 2021
Share this story

“This was a real experiment in multi-use living,” says Los Angeles-based interior designer Susan Taylor, founder of Davis Taylor Design, of this surf shack she designed for a family of four.

The mobile-home-turned-weekend-house that Taylor is referring to in Malibu’s famed Paradise Cove doesn’t meet the strictest definition of “relatable.”

After all, it’s a second home in an expensive trailer park with million-dollar views of the Pacific Ocean. But if you didn’t know the map coordinates of this clever but modest hideaway, you might be fooled into thinking that it was a stylish one-bedroom apartment or bungalow in a less exclusive California town. And the ideas she applied to its small footprint, like an airy color palette of light gray, powder blue, and pops of aqua, and a minimalist, utilitarian aesthetic with plenty of built-ins, could be applied to tight quarters in any ZIP code.

Taylor’s well-strategized decor started with a simple directive from their client: They wanted it to feel like a Scandinavian summer house, and they needed a pale blue Smeg refrigerator. No substitutions, please. Taylor used to steer her clients away from bold purchases like a colorful appliance. But times have changed.

“People are so fatigued and desperate for more joy, and the pandemic has really pushed people to their limits. Now everyone seems more willing to take risks,” she says. “Maybe you had this fantasy of a colorful kitchen but were afraid to pull the trigger. Now you may be like, ‘Screw it. This is what I want. Life is short and I’m going to get that pink stove.’ A bright color like this can be a breath of fresh air. You can almost treat it like a piece of sculpture.”

“So that’s where we started, with that light blue Smeg,” she adds. “And the Dutch front door. Those were the clients’ only two requests.”

Once the Smeg was procured, Taylor used the color as a jumping off point, selecting geometric Smink tile in the kitchen, butcher-block counter tops that were repurposed from another one of Taylor’s projects, creamy Dunn Edwards Swiss Coffee walls, pale wood accents, and day bed cushions (that double as futons) upholstered in outdoor fabrics by the Australian brand Walter G. Those choices give the space a simple, functional, easy-going appeal. And it’s all designed to withstand a beating from surf-loving boys who trek in sand and saltwater from the beach, which is just 300 yards away.

Built-in bookshelves hold enough vacation reading material for a crowd, and built-in day beds double as hidden storage compartments. The base has a lid that opens to reveal a compartment for towels, linens, pillows, and blankets. And the layered mattresses—which are foam-core wrapped in down—can be spread out on the floor to accommodate the teenage brothers and their friends.

“We established priorities, in the kitchen especially, and didn’t sacrifice the things we thought were important, like a full-sized pantry and trash cans, and a decent-sized dishwasher,” says Taylor. “Then we built an outdoor shower, to help manage a lot of people coming in and out of a small house near the beach. With some pre-planning and organization, you can really make it work.”

If custom built-ins aren’t in the budget, Taylor advises clients to get creative. Companies like BOXI offer semi-custom cabinetry that can save you a bundle. And there’s always IKEA.

“Dig around on Craigslist and see if you can find someone who builds cabinetry from IKEA pieces,” she says. “You can buy the basic components and then customize them to fit your space, even adding crown molding and toe-kicks to give it that built-in feeling.”

When a small space feels functional without sacrificing style, it “can feel like a great hotel suite,” says Taylor, with everything you might need, and not much more.

Two Architects Erase Everything Basic About Their Family’s Ranch House