Those chickens sure are popular

by Elizabeth Jardina, Sunset researcher Thanks and hello to everyone who came by the chicken coop today! It was wonderful to meet s... 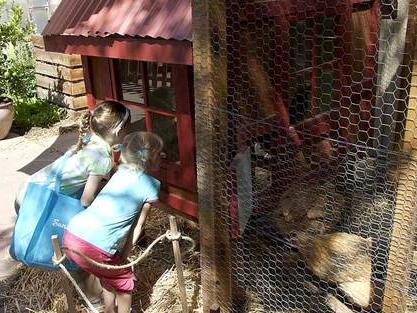 Thanks and hello to everyone who came by the chicken coop today! It was wonderful to meet so many Sunset readers who are excited about our lovely chickens, and who are thinking of starting their own backyard flocks. 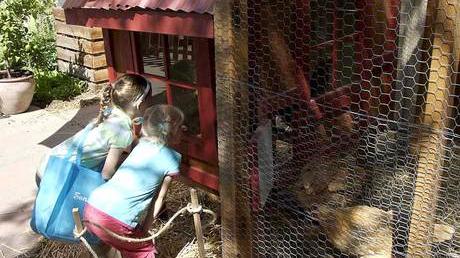 Above, Hannah and Katrina Linn of Burlingame, Calif., meet the flock. The family has been reading the blog and decided to come see the coop for themselves with an eye toward getting their own. “It seems really doable,” said dad Walt.

If you’re in the area tomorrow, do come by and say hello. I’ll be giving out six freshly laid eggs to the first visitor who mentions the blog!

A number of questions keep coming up over and over again, so I thought I’d toss them up on the blog for anyone who might be curious.

Q: How much space do they need?

At minimum, you want to have at least four square feet of chicken yard per laying hen. That’s much less than you’re imagining. Our chicken yard is 10- by 10-feet, which means that we have 100 square feet of yard for only 6 hens, giving them each a kingly 17 square feet each. This is way more than the recommended minimums. Personally, I would be comfortable adding four or so more hens to our flock in the same amount of space without worrying about the ratio of poop to square feet of straw, or worrying that their proximity would cause excess squabbling and pecking. But we don’t really need more hens.

Q: What do they eat?

Mostly layer pellets and chicken scratch. We get ours from an organic supplier, Modesto Milling. That’s the backbone of their diet. It’s supplemented by scraps from the test kitchen (they love leafy greens, anything wilted, fennel and dill, arugula — their favorite, cilantro stems, chile seeds), weeds that we pick from the garden (especially anything in the dandelion family and wild grasses), apple cores, overripe strawberries and other fruit, and insects they find in the dirt. They also eat oyster shells (mixed into the scratch) to give them a calcium boost, which gives their eggs nice, thick shells. Chickens aren’t naturally vegetarians, but we don’t feed ours meat. Because we think it seems creepy.

Q: Which one is the rooster?

We don’t have a rooster. We’re not allowed to have roosters in Menlo Park, and they can be trouble — aggressive, loud, feisty. Some of our chickens have big red combs and wattles, but they’re still not roosters. Whether or not they have big combs depends on their variety, not on their gender.

Also, while we’re at it, chickens lay eggs with or without the presence of roosters. Since we don’t have a rooster, the eggs are not fertilized, which means that they will never hatch into chicks. (This is just as well, because we’re not really in the market for any more chickens.) If we did have a rooster, the eggs would be fertilized while they were, ahem, still in the hen; the rooster doesn’t do anything to eggs once they’ve been laid.

Q: Why are the eggs different colors?

Q: What do you do with the eggs?

We give them to staff members. We originally thought we’d use them in our test kitchen, but they’re different than supermarket eggs — a little smaller, with more tender whites and richer yolks — and so they’d throw our recipe testing off.

Q: They look really clean. Did you bathe your chickens?