The luckiest rooster in the world

Just last weekend, Nugget seemed doomed. By Sunday, he had no place to go other than Half Moon Bay Feed & Fuel, where we bought our chi... 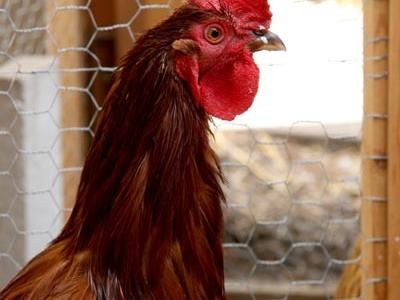 Just last weekend, Nugget seemed doomed. By Sunday, he had no place to go other than Half Moon Bay Feed & Fuel, where we bought our chicks. The helpful person who answered the phone there said, without hesitation, “Sure, we’ll take him!” When I asked what would happen to Nugget, the guy said, “You want the truth, or the sugar-coated truth?” Basically, the chances of someone waltzing into the feed store, spotting Nugget, and giving him a home in green pastures amid sleek and curvaceous hens — well, they were pretty remote. More likely, he’d end up in a stew. 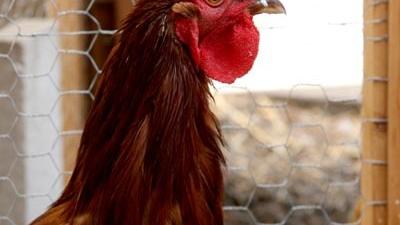 Then on Monday, I found an e-mail sitting in my in-box from a woman named Tina. Tina had been reading the blog mainly for the bee posts, since she’s a bee person, but was taken aback by the iffy news about Nugget. Her e-mail, which sat atop a chain of other e-mails between her and a small network of chicken-rescuers—a flurry of action in cyberspace!—urged me to immediately call a number down in San Juan Bautista “if the other option is the dinner table. :((  “.

So I called. A woman with a quiet voice picked up. She doesn’t want me to use her name or address because she worries about people knocking on her door to pick up animals and do bad things to them. She says she’s a “private individual” who helps find new homes for farm animals, and she’s choosy about who she allows to adopt. “I have three emus,” she said.

“Wow,” I said. “How many animals do you have altogether?”

“What other kinds of animals do you have?’

“I have a hedgehog in the bathtub and three chinchillas in my living room. And I have a barn full of rabbits.”

This lady had been raised on a ranch, but unlike most of the farm people I’d heard from on the topic of chickens, she didn’t believe in executing them when they were no longer needed.

She told me what she had in mind for Nugget. “He will go to a 30-acre orchard, totally fenced, where he will join lots of other roosters. They don’t fight because there are no hens. THe farmer uses them to eat the bugs.”

She continued: “They roost in the trees and have three different watering spots.” She giggled. “They form little buddy groups! It’s a happy spot for chickens. If I were a rooster, that’s where I’d want to be.”

So, dear reader, Nugget goes off to chicken paradise. Fate has never smiled more widely on a rooster.

Tomorrow night, after dark when Nugget is groggy with sleep, we will sneak into the coop. One of us will hold a cardboard box over the entrance to the henhouse, a box big enough for Nugget. The other will go around the side of the house, open the door there, and with a long thick stick and wigglings of a flashlight, urge him gently out the main entrance (WITHOUT waking up the rest of the flock and causing a tornado of thundering wings and frantic squawks) and into the box. Box will be instantly closed and taped shut. We’ll put the box inside the office for the night. Shortly after dawn, Pat McCarty will pick him up and transport him to San Jose, where she’ll hand him off to Tina. Tina will drive him down to San Juan Bautista, to his happy forever after.

* * * * * * * * * * * * *Immediately after talking to Ms. San Juan B, I Googled chinchillas. Could anything be cuter? Somewhere there must be a Japanese cartoon about this creature. 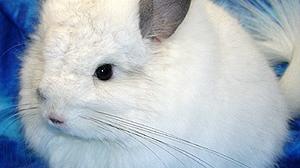