The hit Netflix cooking show adapted its episodes into a cookbook for kids of all ages! 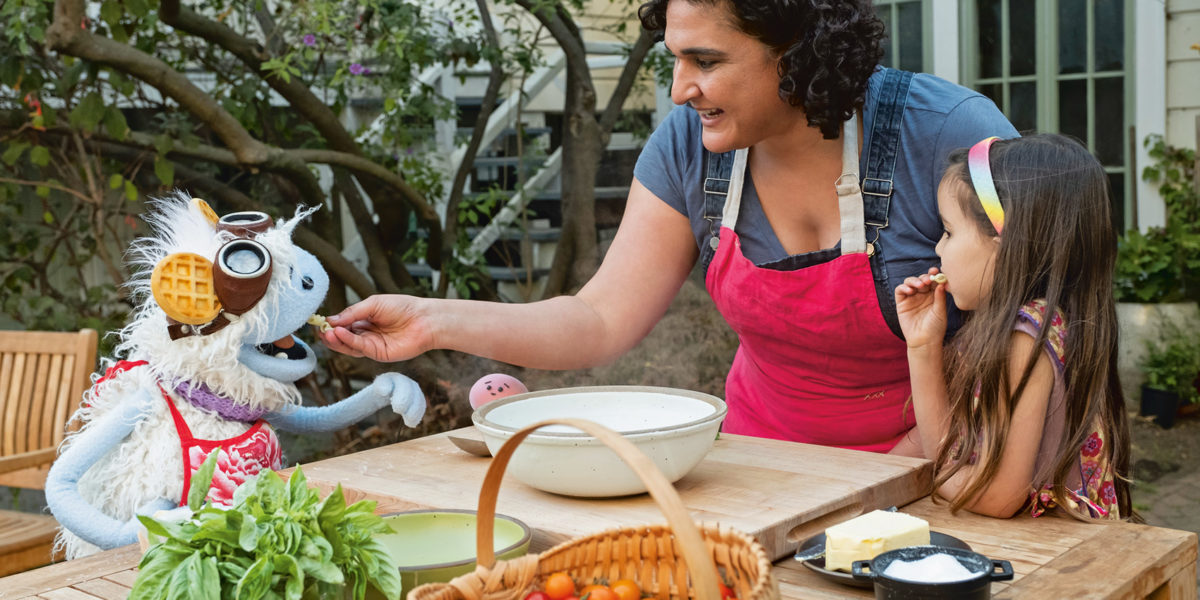 When two puppets named Waffles and Mochi fly to Peru to visit one of the oldest salt mines in the world, on a mission to find the perfect topping for Michelle Obama’s chocolate chip cookies, they end up with more than just a cookie’s worth. The stars of Netflix’s cooking show Waffles + Mochi get a hands-on experience of how salt is mined, made into blocks, and used to season a variety of dishes around the world.

The puppets are the stars of hit children’s series, but they’re not the only ones. The show features a star-studded roster of guest chefs such as Samin Nosrat, José Andrés, Massimo Bottura, and more. Here’s the premise: The puppets work at a fictional grocery store run by the former first lady, and Obama sends them on adventures around the world to learn about specific ingredients like pickles, rice, potatoes, tomatoes, and more. On their journeys, they collect recipes from different chefs using all sorts of techniques, tips, and tricks, and bring them back to the store.

Now the show is bringing the recipes from the screen into our kitchens with a cookbook made for kids (or really, any fan of cooking alongside the puppets). In the book’s introduction, the show’s creators and show-runners Jeremy Konner and Erika Thomahlen share their motto: “If a puppet can cook, so can you.”

Nigerian-born chef Yewande Komolafe helped the Waffles + Mochi team create dozens of recipes inspired by the ingredients in the show’s first season. Adapted recipes come from chefs like Pía León, who was awarded the 2021 best female chef by World’s Best 50, with whom the puppet duo made creamy stews over an open fire in Peru. You’ll also find a recipe for an Indian-inspired pani puri filled with ingredients typically found in a Caprese salad that they made with Bay Area chef Preeti Mistry.

“None of the recipes are too complicated or require too many tools, and they are for a range of skills so everyone in the family can help—from expertly boiling an egg to whizzing up gazpacho in the blender to roasting mushrooms for the ultimate umami flavor,” Konner and Thomahlen share in the book’s intro.

The book can serve as a tool for kids just getting into the kitchen to help them expand their palates and culinary skills. “Whether you’ve been cooking and baking for years or you are just starting your culinary adventure, these recipes will allow you to explore the ingredients, techniques, and—most important!—flavors that make cooking fun,” recipe developer Komolafe says in her forward. Picky eater or not, rest assured Waffles and Mochi have traveled the world to find a recipe that both kids and adults will love.

While the 110-page cookbook is now available in stores and online, we’ve got a few of the recipes to hold you over until it makes its way into your kitchen.

This simple recipe draws inspiration from the popular Indian street food but has endless options as far as fillings. Stick to a traditional chickpea potato filling or add tomatoes and basil like Preeti does on Waffles + Mochi.

This recipe is adapted from a version made by Peruvian chef Pía León over an open flame. León was featured on the show while cooking outdoors with her 4-year-old son, who agrees this dish is totally delicious. “Since we can’t always cook outside, this dish is a creamy casserole that’s easy to make inside,” Komolafe writes in an excerpt from the new cookbook. “It has all the elements of Pía’s dish, including the fiery finish that happens under the oven’s broiler, which is its highest setting.”

This recipe from the Waffles + Mochi kids cookbook is all about umami. The salty-sweet sauce that glazes the tofu and mushrooms combines miso, soy, fresh garlic, ginger, and more ingredients. Save leftover sauce for tossing veggies or marinating meat.

These 7 Ceviche Recipes Are the Ultimate High-Flavor, Low-Effort Way to “Cook” Seafood