We chatted with chef Preeti Mistry about educating kids on food and the new Netflix show Waffles + Mochi. 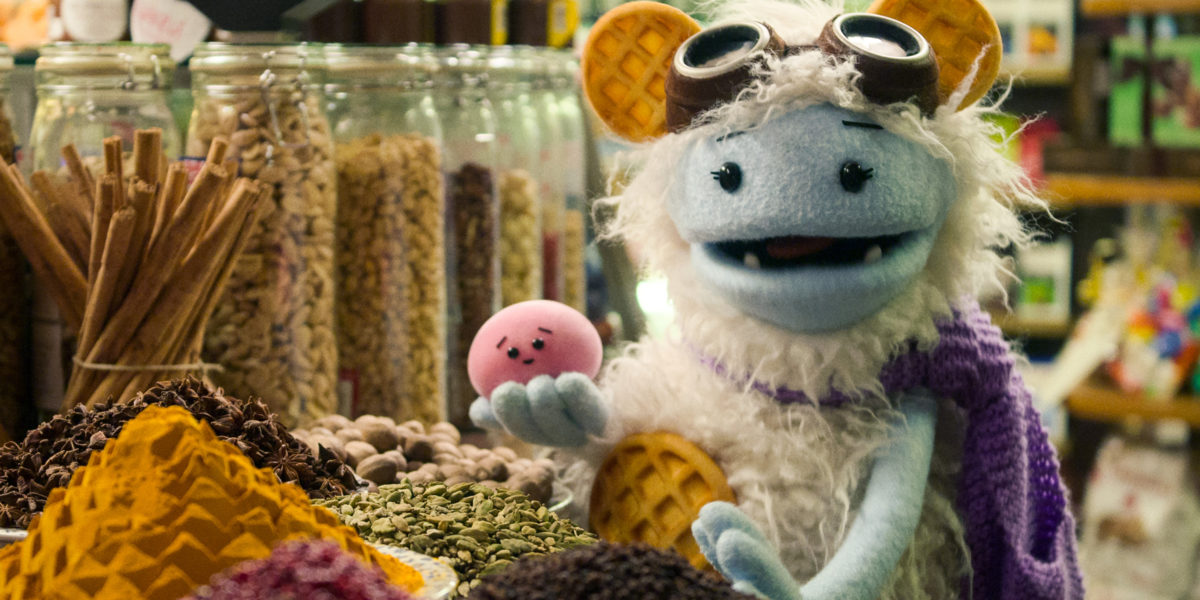 As an Oakland native, I was familiar with Preeti Mistry as the James Beard-nominated chef behind Juhu Beach Club. Now in a new role, on the Netflix cooking show Waffles + Mochi, Preeti shares a delicious recipe for homemade pani puri filled with fresh herbs from the garden in an episode. The kid’s cooking show features an adorable mochi puppet accompanied by another puppet with frozen waffles for ears; the pair travel around the world learning about and gathering ingredients to take back to a grocery store run by none other than Michelle Obama. Mrs. Obama appears in each episode with a new mission or task for the endearing puppets and rewards them with a new badge representative of a culinary experience at the end of each episode.

Preeti grew up a second-generation Indian—born in London, raised across the U.S. After watching the episode, I was surprised at how much I had learned. I had always considered myself a foodie, yet I didn’t even know the legitimate difference between an herb and a spice. As a kid, I remember my palate being endless. I would eat any and everything my parents put in front of me for the most part. I remember chomping down lamb chops at family dinners at grandma’s house, or a big bowl of spaghetti when my mom would spend Sundays stirring homemade tomato sauce in a big pot. Watching Waffles + Mochi took me back to turning on Rachel Ray’s 30-Minute Meals as a kid. Though I can’t imagine what it would’ve done for my self-esteem to see so many people of color on the screen teaching me as a little one.

For those of us who haven’t seen the show yet or simply don’t know, can you explain the difference between herbs and spices?

Preeti Mistry: Cilantro: The leaves and stems are an herb, and when it goes to seed and flower the green seeds are then dried and are coriander. Not all spices are like that; cinnamon comes from the bark of a tree. Spices can be all kinds of different seeds. Herbs are the leaves and stems before the seeds and flowers appear.

What role do spices play in your cooking?

My cooking without spices and herbs would be nothing, that’s the backbone. There’s an Indian saying “With the right masala you can even make rocks taste good.” Everything I do is spices and herbs. We used to have jars of spices in the restaurant and people thought they were decor, but no, we used all of them. It’s hard for me to do simple recipes because it’s always a little bit of this and that. I used a lot of recipes before I could look at a shelf of whole spices and know what I wanted to do with them.

Why Puri Puri for the show?

Tomato and basil isn’t traditional in pani puri, but in general they’re one of my favorites. I’ve messed around with putting tons of different things into them. The way we could play with it on the show was a super fun experience.

How do you feel shows and spaces like Waffles + Mochi benefit the youth involved?

I had no idea food would be so important and integral to our society….I feel like it’s something that needs to be less elitist, taking the idea of healthy eating, local eating, out of the elitist space….healthy nutritious food made from scratch is for everybody, not just people with a lot of money. I think that’s one of the most important things—there’s been a disservice done to the local organic movement in how they framed it. A lot of the things kids are learning, like just seeing Michelle Obama instead of Alice Waters, they can see themselves places. You have me, Michael, Michelle Obama, Samin [Nosrat], it isn’t rejected by kids of color because it’s not them. We are the ones by choice or by force the backbone of agriculture in this country which is important for kids and BIPOC kids, in general, to see themselves reflected.

What’s the most important part of educating kids on food and cooking for you?

Waffles + Mochi does a really good job at presenting all of these foods from all over the world with no value judgment. My episode is one of the riskiest ones because what do kids complain about the most? “What are those green things?” or “that’s too spicy.” Kids can eat the same things as us. So many of us grew up in households where kids were catered to separately. Waffles’ reaction to eating something spicy was like “woah that was cool,” so presenting things to kids in a positive way as opposed to telling them they won’t like it. It can help a lot of kids be more open and not have so many food phobias. Ideas are put into kids’ heads that things are different or weird when they could be exciting; the show effortlessly shows all of this stuff and nothing is weird or different.

What was your relationship with food as a kid and how did it evolve?

I was super curious, we didn’t have a lot of money so going out to eat was a luxury. They would say Preeti loves outside food because I would want to try new things all the time. I would watch tv and would wonder what’s seafood, what’s crab, I want to go to a steakhouse. I just wanted to know, I remember going with my uncles and they took me to a seafood restaurant and the smells were amazing. I was more curious about eating than cooking. In my twenties, I left home and started missing home-cooked food and realized it came naturally to me. On the weekends and in the evenings I would go to Bi-Rite in the Mission and find different ingredients or at the farmers market and try new things.

What was your first thought when you were pitched the show?

I was so honored and excited, everything was very hush hush because of the Obamas. They mentioned that Samin was a part of the show and I knew some of the crew had worked with Anthony Bourdain and others so we knew each other. It was a really nice group of people, they thought a lot about what they were trying to message and do it in a way that was effortlessly inclusive.

Did you get to meet Michelle Obama? (I had to ask)

No, I have not gotten to meet Mrs. O as of yet, but it was quite an honor to know she knows who I am and picked me for the show.

A California Chef’s Modern Take on Indian Cuisine in America, Regional Representation, and Recipes for You to Try at Home