Kerfuffle in the nest box

by Margo True, Sunset food editor One by one, our chickens are stepping up to their duties and beginning to lay eggs. Ophelia wen... 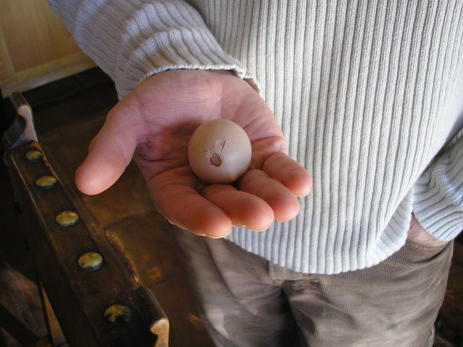 One by one, our chickens are stepping up to their duties and beginning to lay eggs. Ophelia went first, causing much excitement around these parts. Alana started up a couple of days ago, producing a slender greenish egg that looked a little like a smooth kiwi. Both of them seem unfazed by this radical change in their physiologies. They just calmly deposit in the henhouse and then hop back out to the yard as though nothing’s happened.

Yesterday, it was Carmelita’s turn, the redder of our two Rhode Island Reds. No walk in the park for this chicken, I’m afraid.

Around noon, Jim, Team Chicken’s leader, reported that he’d seen her sitting in one of the nest boxes, shooting her legs in various directions and squawking frantically.

I popped by the coop an hour later and there was no sign of her—in the yard or, when I peered through its window, in the henhouse. Finally I saw a motionless bit of wing up in a nest box and went round to the latched door that leads to it. She was in there all right—scrunched up against the door in a frozen position, her head thrown back and beak open, like a figure in a Napoleonic war painting. Good God. I shut the door quickly. The poor thing clearly needed privacy.

What if that first egg is stuck, I wondered. Or breech or something. Does massage help? I blocked these thoughts and managed to get back to work.

After another hour or so, Jim came into the kitchen, holding her small brown egg—with a hole punched in it, a hole that looked suspiciously beak-size. He’d found Carmelita still in the nest, clucking loudly over her punctured egg, and snatched it before she could do further damage (or worse, acquire a taste for eggs, which apparently some chickens do). 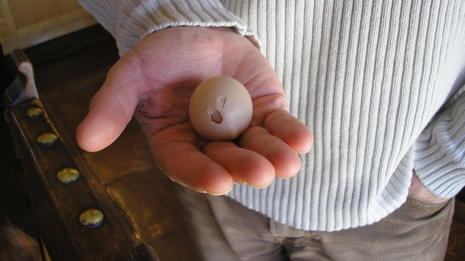 Maybe she was so furious after her wild afternoon that she vented on the egg. Or maybe I am a hopeless anthropomorphist.

Anyway, we blew the contents out of the egg, and now it’s just a peaceful shell with a scar. Here’s hoping things get easier for Carmelita.