Drooping tail and sitting around: What’s wrong with this chicken?

Alana is sick. We're not sure what's wrong with her. Alana sitting on a hay bale, tail down and listless.  On Friday, I noticed her sit... 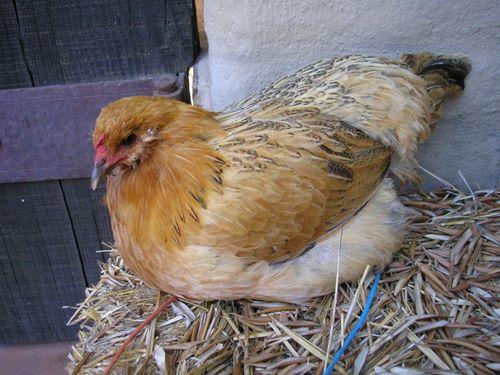 Alana is sick. We’re not sure what’s wrong with her. 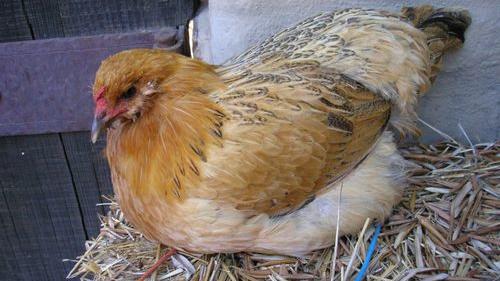 Alana sitting on a hay bale, tail down and listless. On Friday, I noticed her sitting down in a corner of the coop, with a sort of sad inward gaze. When she did finally stand up (no chicken can resist the lure of corn on the cob, unless actually dead), her back was hunched and her tail was pointing down instead of its normal perky up.Immediately I started paging through all the scariest parts of my various chicken-raising books and alerted art director Jim McCann and copy editor Elizabeth Jardina, fellow Team Chicken members. The problem seemed, on the face of it, to be a case of egg-binding. This is not good. It means that the new egg is stuck inside the chicken, and despite her patient heaving, just won’t come out. If it’s not fixed, it can be fatal.We followed the combined advice of the books to get Alana to relax and pop out her egg. Unfortunately we had no heat lamp, so I tried gently massaging her vent with olive oil (truly not as bad as it sounds) and Elizabeth ran a warm bath. 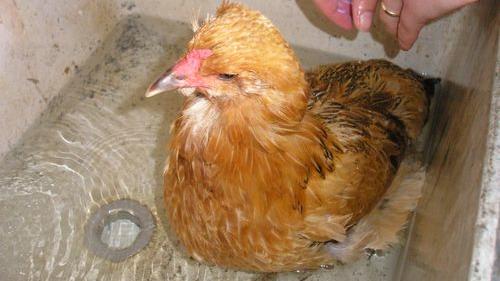 Alana in the tub. She had enough after a few minutes and hopped out. Then we tried massaging her stomach in the direction of the vent to coax the egg out. (Mind you, this is all happening during the close of our October issue and we had no time to be out massaging and bathing this chicken, but we’ve come so far with our flock…)Nada. In fact we couldn’t feel an egg at all.Semi-miraculously, who should show up to take a tour of Sunset (and see the chickens) but Jody Main, our first chicken teacher. 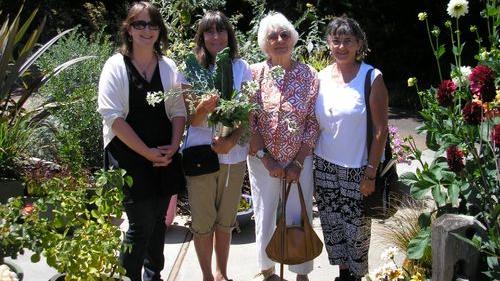 Jody Main brought treats for our chickens (she’s holding borage and kale, among other greens) with two friends. Elizabeth is on her right.Jody wasn’t sure what was wrong with Alana, either. She did, in the gentlest possible way, tell us how to bury a chicken (i.e. at least three feet deep). “If a chicken goes, she goes fast.” We’d already decided that we would not again be spending hundreds of dollars on chicken surgery, so nature would have to take its course here.Alana spent the rest of the day in a box in Elizabeth’s office, being fed graham crackers.The next day I came in, prepared to get the shovel…but there Alana was, tail up and striding around.And now today…tail down, droopy. It’s been at least five days since we saw Alana’s pretty green egg. I’ve been reading that obesity can cause egg binding. As can a lack of calcium…but we do feed our hens oyster shells. Maybe not enough?Our test kitchen generates a whacking lot of scraps and we save them tenderly for the chickens…they are generously fed.Maybe too generously?Well, Alana is spending the night in the box. We hope she makes it through the night. In the meantime, please send any diagnoses our way…we could use them.