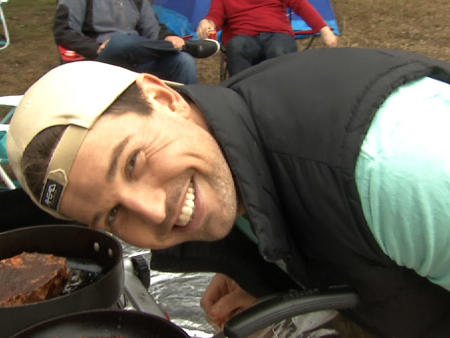 The challenge is on!

My boys, Joe, Anthony and I were catching up over some cold delicious brews at Half Moon Bay Brewery when they bet I couldn’t and wouldn’t go camping.  Not only did I go camping with them, I grilled them the best darn camping food they had ever tasted, complete with my special Ryan Scott twists!

I needed some tips so I turned to my friend Elaine Johnson, Associate Food Editor at Sunset magazine, the ultimate guide to living in the West.  The folks at Sunset know food and camping better than just about anyone and Elaine’s biggest tip was to prepare as much as you can ahead of time in your kitchen at home!  A little prep work makes a huge difference out in the wilderness. 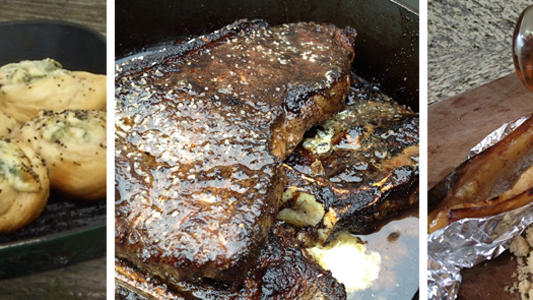 Honey Black Pepper Blue Cheese BiscuitsI only have a few things to say about these biscuits.  First, they are amazing. This recipe  is incredibly easy and delivers mouthwatering biscuits that are set to impress any camper. Simple pre-made biscuits from a can are stuffed with creamy, tangy, blue cheese, sprinkled with freshly ground black peppercorns, and drizzled with sweet golden honey. What a flavor combo!  Really, what more can I say?

Jalapeño Garlic Coffee Rubbed SteakCoffee on Steak??  Yep. It may sound like an unusual pairing but java actually heightens the flavor of beef.   You want to use a fine grind of coffee or espresso or you’ll end up with a crunchy steak. I added jalapeño and garlic into my rub mix to take it up a couple of notches. Not only do you get a little caffeine kick, but you also get a few good, bold kicks with the extra heat from the peppers.

Grilled Bananas FosterWho says you need a kitchen stovetop to flambe? The boys were already impressed with the main course, but the grilled bananas foster flavored with rum, butter, and cinnamon really set them over the edge. The trick to making this classic dessert while camping is to double wrap them in foil before nestling them in the hot coals.

Chef Ryan Scott is the host of Food Rush on the Live Well Network. He takes us on an entertaining ride through life as he juggles food, food and more food on the half-hour series.

A 2001 graduate of the California Culinary Academy, Ryan Scott has cooked and learned in the kitchens of many of the country’s best chefs. He was a line cook at Restaurant Gary Danko, and staged with Daniel Boulud at Daniel in New York, Charlie Trotter at Trotter’s in Chicago, and Suzanne Goin at Luques and A.O.C. in Los Angeles. In late 2005, he joined the Myth restaurant group and launched its successor, Myth Café two months later. Myth Café became an ultimate hot spot for foodies and the lunch crowd in San Francisco and was named one of the top dining destinations for California cuisine by San Francisco Magazine, within the its first three months of opening. In late 2007 Scott was cast as one of 16 contestants on Bravo television’s national, top rated reality cooking show, “Top Chef.”