And the World’s Best Camping Food Is [Drum Roll] Ceviche…?

Bringing raw fish to the wilderness might seem dicey, but Guerrilla Tacos chef Wes Avila swears by the zesty, spicy, umami-rich treat—here’s how he does it. Ceviche just might be the perfect camp food. That’s right: Raw fish. In the wild. Miles from refrigeration. Don’t believe us? Then believe chef Wes Avila of Guerilla Tacos fame. He made his name selling ceviche tostadas and other fine modern Mexican food out of a truck on the blazing hot streets of Los Angeles, opened a brick and mortar restaurant, and won a prestigious Michelin Bib Gourmand just last week. And he camps. And when he camps, he makes ceviche. Not burgers. Not hot dogs. But fish that’s been cured in acid and soy and served with spicy salsa on crispy tostadas.

This wasn’t our idea, believe us. When we invited Avila to teach a camp cooking class at a recent Sunset event, little did we think he’d tell people not to cook. This was at Camp Sunset, a real-world activation of Sunset magazine that we just hosted at the very cool culture festival called Outpost in downtown Los Angeles. Avila showed up with a Yeti cooler of raw fish, a box of vegetables, a bag of chips, and a cool little portable wooden molcajete (a.k.a. a mortar and pestle). He pulled out tomatillos, chiles, cherry tomatoes, cilantro, and wild-caught salmon sliced up in a plastic tub.

In about 10 minutes we were eating the most delicious raw fish imaginable, something between a tangy ceviche and a salty poke. In the wilds of Los Angeles. If you closed your eyes you could’ve been in the jungles of the Yucatan, in the shade of a Douglas Fir on the Colorado river, or in the back of an Airstream on a beach in Ventura. It was fresh and savory and crunchy and bright. It tasted like all that’s good about the beach and the great outdoors. But to pull off such a transcendent dish safely, you need to follow a few rules. Here’s what we learned:

1. Buy the best fish you can find

If you’re buying exceptional fish, you’re going to be working less because fresh fish doesn’t need a ton of help. “Great fish means less time in the marinade,” says Avila. He made us ceviche with fatty troll-caught Alaskan king salmon. But not everyone has access to that, so if you can’t find the restaurant level stuff, Avila says you just need to marinate it longer.

2. Marinate the fish before you hit the road

While the idea of catching a fish in the wild and dicing it up for some super-fresh ceviche is the pinnacle of camp chef resourcefulness, let’s face it: That’s not going to happen. The kitchen is where you can keep every point of contact clean, dirt- and bug-free, and your fish as fresh and cold as possible before it goes in the marinade and into your fridge before being packed for the road. And that marinade is what takes the fish from being a merely delicious and unctuous protein to a zippy, salty-sweet, multi-textured, seasonal, life-changing dish that you will make again and again. While the fish, acids, and other ingredients may change, ceviche always includes an acidic citrus like lemon or lime, additional tasty liquids such as olive oil or soy sauce, as well as fresh vegetables and herbs with varying degrees of crunch, color, and heat: tomatoes, tomatillos, cucumbers, onions, shallots, jalapeños, and cilantro.

You sweated the prep on the front end, so don’t blow it in transit. Avila showed up with a Yeti, not some cracked styrofoam cooler he bought at the second-to-last gas station he passed. Do like Avila and use a highly engineered cooler with a ton of ice on top. And need we point out you should eat it the first day? Ceviche is not a day three—or even day two—affair. 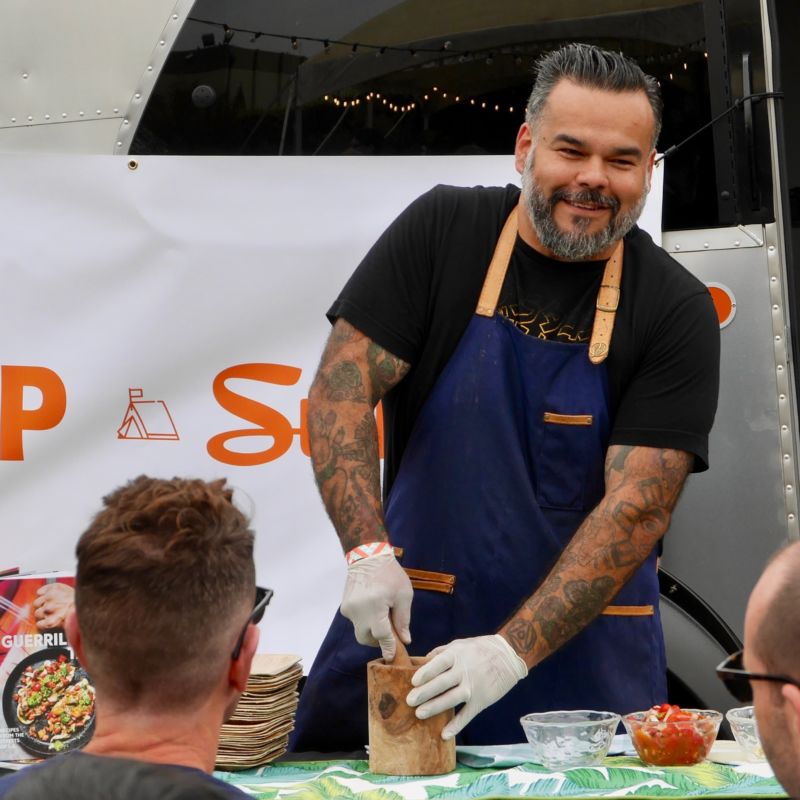 Acid “cooks” the meat by denaturing the proteins a bit while adding tangy flavor. Lime is great. But yuzu is better. The Japanese citrus has all the flavors and acid of lime, but also floral and savory notes that make it mind blowingly satisfying.

Soy also helps flavor and preserve the fish, but with the umami punch of fermented soy and the curing properties of salt. You absolutely can use standard supermarket soy sauce, but Avila, being a flavor-maximizing chef, recommends going one step further and using an aged and smoked soy sauce. We asked him for his source, and he demurred, saying, “I get it from a guy I trust.”

6. It’s okay to use store-bought chips

Avila says don’t go frying your own little tostadas in 350-degree oil with a little laser thermometer. We live in the era of exceptional chips. Buy pre-made tostadas, or buy chips and dub them mini-tostadas. “Come on, you’re camping,” says Avila. “I’m not about to tell you to sit there by the fire deep frying tortillas one by one.”

And if all you really want to do is just make ceviche, check out this amazing salmon ceviche recipe or this recipe for incredible shrimp ceviche tostadas. No camping required.

Camp Sunset: How to Make the Perfect Cup of Camp Coffee

How to Use a Camping Stove