With autumn’s foliage in full effect, end-of-harvest winemaker dinners, fewer crowds, and great deals on lodging and tastings, the West’s wine countries are even better to visit off-season 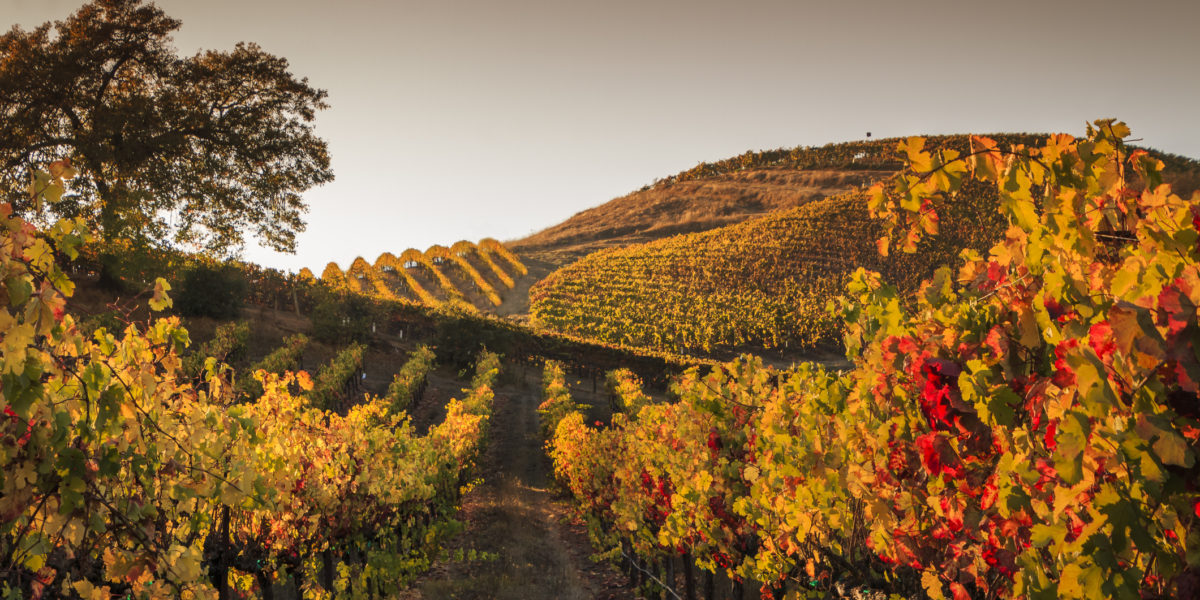 We won’t deny the height of the crush season in any wine country is a ball. But, for those who prefer their vineyard touring and wine tasting experience with a chill vibe and more personal attention, the time to go to wine country is now. Not only are there fewer crowds, but the West’s wine regions are also ablaze with autumn’s foliage, making for a spectacular fall trip on every level. Wine countries’ temperate weather means the foliage tends to come later, and when it does, it’s explosive. Vineyards take on golden hues, which play nicely with the amber, crimson, and buttery gold-colored elm, sycamores, and bigleaf maple trees. In California, some of the state’s best foliage lies around the various wine countries. Napa peaks mid-October and into November. Sonoma remains flamboyant through October. While the Okanagan Valley has some of the most spectacular fall colors anywhere, you only have until about mid-October to catch the show. Oregon’s wine country should deliver good color through the end of October; same as most Washington and Idaho vineyards. If you’re getting a late start, stick to San Luis Obispo and the San Ynez Valley, which stays golden in November.

Although folks are getting increasingly hip to the magic of off-season travel, the crowds significantly drop after the crush. (Not that they were ever big this year.) Now’s the time to go to more coveted wine regions like Napa, which can otherwise be too crowded to explore properly. It’s basic math: Less demand equals lower prices. In late October, hotel prices drop by about 40 percent in the Napa area.

First Dibs on the Fall Release From October through November, wineries debut their new vinos; and if you’re there, you get to taste them first—oftentimes with the vintner present and with wines that are only poured in the winery. Walla Walla hosts a region-wide release festival the first weekend in November when vineyards across the region share their new loot along with special dinners, live music, and other fun events. Forgeron Cellars presents its release with a brunch, Waterbrook (pictured) draws people with its fire pits and estate wines, Skylite Cellars provides chili (which pairs well with the winery’s new Malbec), and Northstar serves their new Cab Franc and Petit Verdot with live music.

Wineries host tours, seminars, and other educational experiences year-round, but they’re even better to experience later in the fall when wine production is still underway, but there’s less competition for access. In Sonoma, you’ll get a whole different perspective on your wine drinking during Gloria Ferrer’s Glassware Exploration, where you learn how much difference the right wine glass can make. Or, sign up to be a winemaker for a day at Buena Vista Winery. Then, again, you might just want to save your pennies for the Vintners’ Holidays (sadly suspended for now), which normally runs on weekends from November 3 through December 5, in Yosemite. Rates can be steep (starting at $403 per night), but for a nature-loving oenophile, it doesn’t get much better. Weekends include a Meet the Vintners dinner, wine tasting seminars, and a five-course gala. Attendees include winemakers from Robert Mondavi, Tablas Creek Vineyard, Silver Oak Cellars, and Lindquist Family Wines No, we’re not talking about sweet, winter wines that get picked later, but rather lesser-known wine regions that are perfectly positioned for longer and later harvests. Located further south in California, San Luis Obispo hosts its big harvest party—complete with an auction, free tastings, and live music—in November, while neighboring Paso Robles’ has its harvest fest in mid-October and another big wine soiree the weekend of November 8-10 with The Garagiste Wine Festival. More than 60 of the region’s renegade, small-production vintners get together at the American Legion Hall in Templeton and the Paso Robles Event Center. The harvest parties start in September and last well into November with plenty of awesome celebrations taking place later in the season. Napa Film Festival (postponed in 2020) takes a wine-soaked approach to the classic film fest experience and includes tasting at wineries between screenings, VIP dinner parties with vintners and vino-loving A-listers. In its second quarter-century, Salud! The Oregon Pinot Noir Auction remains one of the most anticipated events of the wine world with more than 40 wines created exclusively for the auction, which goes down online in mid-November. On top of that, there’s the Healdsburg Crush (virtual this year) in mid-October, Sonoma’s Wine & Food Affair in early November (also online in 2020), and most years Wine of the Rock in Bainbridge in early November, although it’s canceled in 2020.

The third November in France is deemed Beaujolais Nouveau Day. Every year, winemakers gather to celebrate the end of the season by toasting with this oh-so-sweet, low-brow wine made specifically for the occasion. In the West, the largest of these parties happens at the Heathman Hotel in downtown Portland. Most years (its 2020 fate is unclear), a James Beard-winning chef helps prepare the top-shelf buffet, which gets paired with loads of French-influenced or imported wines. WillaKenzie Estate, Pacific Rim Wine, and Ruby Vineyards are just some of the vinos on-tap.

12 Can’t-Miss Fall Festivals in the West