The wine-growing region ravaged by wildfires this fall is still open for business. Plus: 11 ways you can help support relief efforts 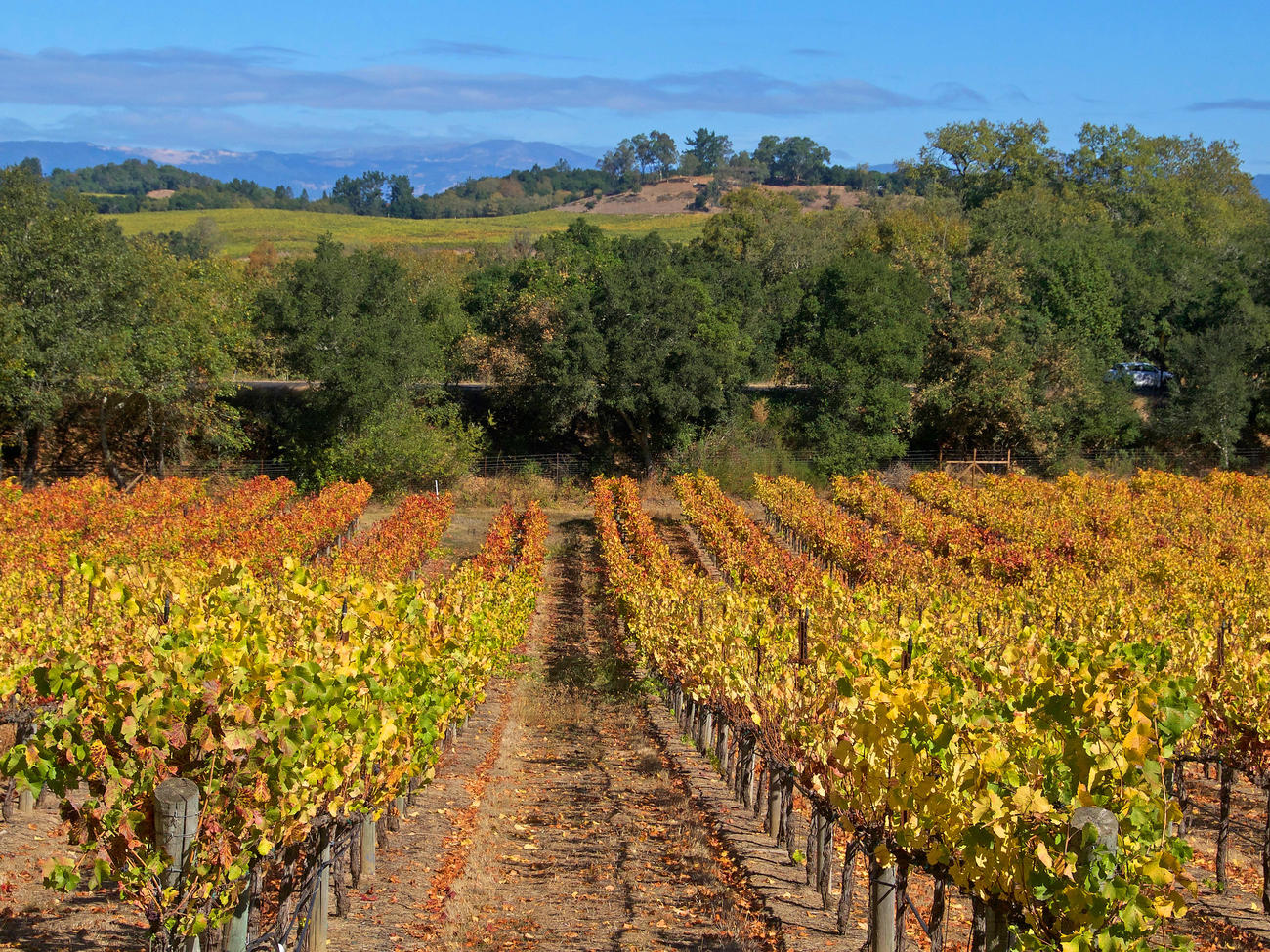 In early October during harvest, the number most closely tracked in Sonoma County wine country is brix, the sugar level in grapes that helps alert winemakers when to pick. On October 8 when massive fires blazed through Napa, Sonoma and Mendocino wine countries, another stat trumped it: fire containment percentage.

With the fires now 100 percent contained, the question for many, whose last impressions were of gripping infernos downloaded from the Internet, is what remains. “Can I get a drink? And is Sonoma County up for pouring me one?” In short, yes, and yes.

For starters, it’s business as usual at Geyserville Gun Club Bar & Lounge, near the banks of the Russian River. Although it’s happy hour, the seats stay vacant at the nearly two-year-old cocktail lounge. General Manager Lance Macdonald, also a reserve firefighter, steps outside the 1900s building with me into an idyllic fall day. The sun is setting, flushing the town a brilliant shade of rosé. “It got pretty close,” he says, nodding toward the foothills of the Mayacamas Mountains, half a mile in the distance. A black patch smudges the hill. “It came to right there,” he points, his voice raspy from a week of fighting the blazes. “But we dodged it.”

Indeed. That’s true for most parts of Sonoma County that fall on a wine drinker’s radar. The country backroads, so gorgeous to drive, are open winding pavement; and the welcome mats are out.

Santa Rosa, the largest city in the county, made the news. That’s where the two neighborhoods of Coffey Park and Fountaingrove fell. A dozen miles to the east of Santa Rosa, the two wine-tasting towns of Glen Ellen and Kenwood fared the worst. They belong to a region known as Sonoma Valley, which also includes the town of Sonoma.

“We had 13 wineries in the valley report damage of some sort,” says Sonoma Valley Vintners & Growers Alliance Exectuive Director Maureen Cottingham, “but zero wineries burned to the ground in the valley.” The damage was mainly to outbuildings. Sonoma County as a whole lost one winery.

Regular visitors to the county might note other tweaks, like the signs taped to store windows thanking Cal Fire for their bravery; or the incredible cheerfulness of locals despite days spent on edge. Or the many parking spots available around the square in the hub of Healdsburg during harvest.

Sonoma County’s economy is fortified by wine. Hotels, shops, restaurants, ice creameries, juice bars, all have been built around the grape. Wine pulls in visitors. It employs residents. And harvest is the pièce de résistance of the year when the money flows into locals’ pockets. So when there are empty tasting rooms, hotel rooms, and parking spots in Healdsburg, one of the busiest towns, on a Saturday during harvest season, locals are understandably edgy about the future.

“About 90 percent of grapes had been picked when the fires broke,” she says, because of a Labor Day weekend heat wave that sent temps soaring into the 100s.  “This late in the harvest, Cabernet was still left on the vine, but it is a hardier grape. The skin is tough,” she says.

Should you come to celebrate, thank the vines, which, when the fires broke, still retained moisture because of the recent harvest . “The vines turned out to be natural fire breaks,” Kruse says. They stopped the fires from spreading. Vineyards are mostly intact, although owners are still assessing.

Some have found it insensitive to talk about wine when there’s been loss of life and residences. But it is these very vintages that funnel money to the workers who need to rebuild their lives. Yes, a tragedy ripped through wine country, but 20,000 people in the county—one in ten workers—work in tourism.

Siblings Joe and Catherine Bartolomei, owners of Farmhouse Inn (above) in the tiny town of Forestville, have urged people to visit on Facebook. But cancellations are still coming in for the boutique 25-room property with a spa built like a horse barn, and a garden that grows ingredients for the spa. The property’s gardener, Jose Abarca, lost his home. The Bartolomeis want to help him, but need visitors to do so. “We want to send the message out there that the news is dramatizing. The danger has passed,” Catherine says. “Look around? Does this seem like a bad day?”

To her point, the sky is … well, sky blue. The temp mild. A breeze ruffles tiny oak leaves like little wind chimes. No, if anything, this is a day built for touring, car windows rolled down. The tasting rooms have elbow room, and, it turns out, there’s room at the inn.

11 Things You Can Do Right Now to Help

1. Buy Sonoma-made from your local grocer, wine store, or restaurant. “If it was made, grown, fermented, bottled, or brewed in Sonoma County, please enjoy it,” says Tim Zahner, Chief Operating Officer for Sonoma County Tourism.

2. Visit Sonoma County for harvest. As in, now. Gas up and go.

3. Attend live performances by musicians banding together to raise money for different charities. Among them are Metallica, Dave Matthews and G-Eazy (San Francisco’s AT&T Park, November 9, from $149.50); a semi-private John Fogerty gig (Hamel Family Wines in Sonoma, November 11, from $20,000 per couple); and The Counting Crows (Green Music Center at Sonoma State University, November 18, from $49.50);

4. Looking to buy a wedding or holiday gift? Consider buying a gift certificate at a hotel in Sonoma County for the lucky receiver.

5. Access GoFundMe to find a campaign that benefits a fire victim. Farmhouse Inn set up funds for two employees who lost their homes here and here.

6. Make it an after-work outing with a group, if you live nearby. For example, rent a carpool van to drive to Duke’s Spirited Cocktails in Healdsburg for drinks. All profits made until Thanksgiving will go to charities, including Undocufund, which filters money to undocumented workers who lost their homes.

7. Join in on a yoga class or a beer-food tasting with businesses who are donating the money they collect to fire relief. Visit the event listing page for more details.

9. Tap into your social media following. If you do go, post images of your great experiences on Instagram and Facebook. If you buy a bottle of Sonoma wine or a Sonoma cheese, spread the word. When you donate to places like GoFundMe, they let you share on Facebook. Use these vital hashtags: #cawinestrong #sonomastrong

10. Become a member of a Sonoma County winery directly with that winery. Members often receive bottles, discounts on bottles, and invites to private events.

11. The Culinary Institute of America at Greystone, in St. Helena, is hosting a charity dinner on December 9. It will be presided over by winemakers Jean-Charles Boisset and Carlo Mondavi. The dinner will be cooked up by A-list chefs including Thomas Keller and Christopher Kostow. However, if you’re unable to attend the dinner but provide a service or product that can be auctioned off, consider donating to Napa Sonoma Relief. To donate items to be auctioned, contact Maureen Cottingham of Sonoma Valley Vintners & Growers Alliance, [email protected] or 707/935-0988.

Continue to stay tuned for more updates on where you can visit now.

All photos that appear in this article were taken after October 10, 2017. The fires started on October 8.

How the Northern California Wildfires Could Change the Wine Industry Forever