Fate of Wild Horses in Limbo as Overgrazing, Drought Decimate the West

Record numbers of wild horses and burros will soon be removed from public lands across the West as officials battle a complex combination of overgrazing and historic drought. 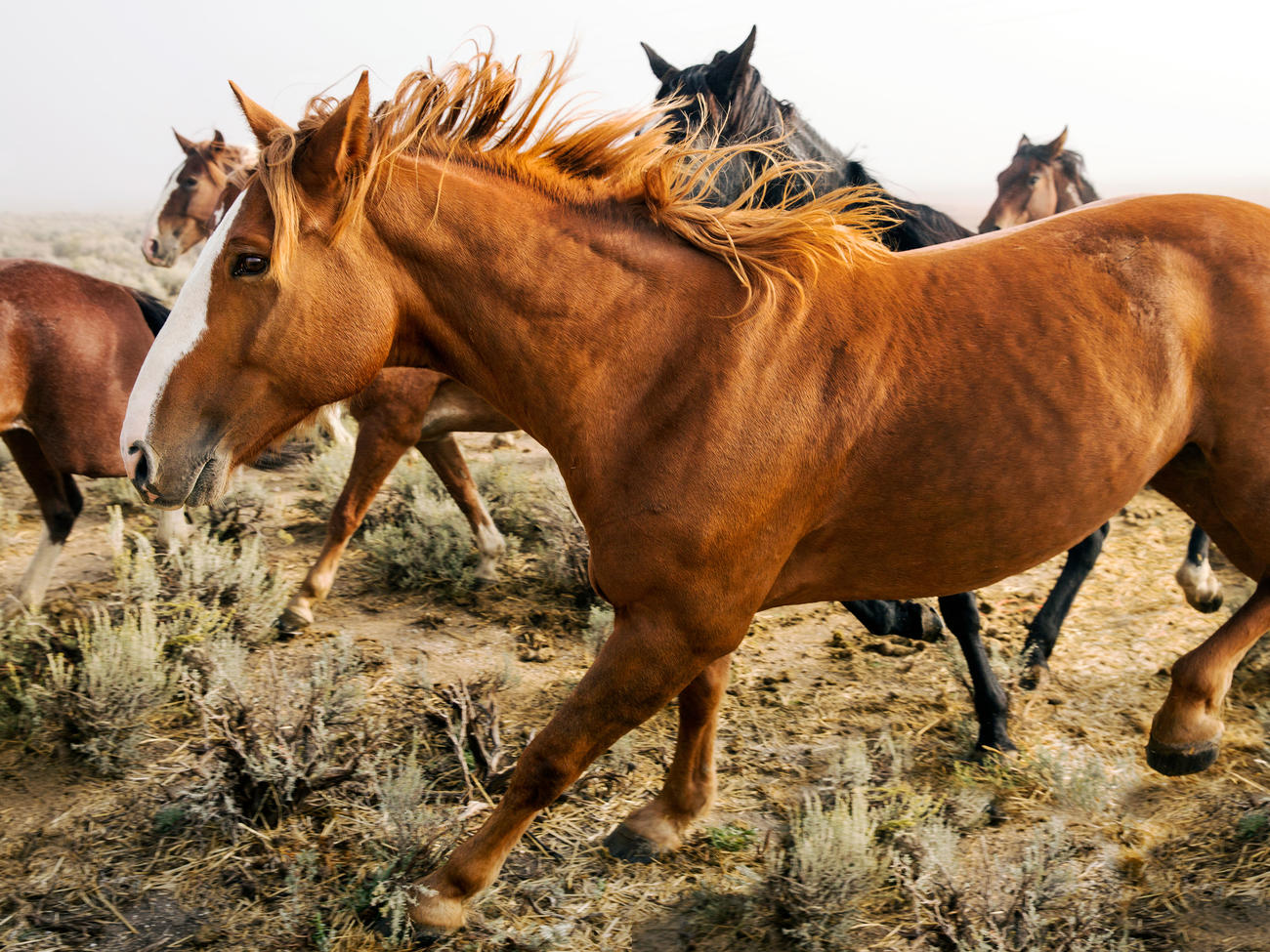 Record numbers of wild horses and burros will soon be removed from public lands across the West as government officials struggle to alleviate ecological strains caused by a complex combination of overgrazing and historic drought.

Herds of invasive wild horses have, in recent decades, been thorns in the sides of environmentalists who malign the animals’ destruction of resources critical to native wildlife. Exacerbating that dynamic are increasingly dry conditions that diminish water and food supplies, adding the risk of starvation to the welfare of herds that, if left unchecked, are prone to increasing in number by up to 20% each year.

The Bureau of Land Management is responding to the welfare crisis by slating a minimum of 22,000 horses for non-lethal removal from overpopulated herds that call the Bureau’s 27 million acres of western lands home. Expected to conclude by the end of September, the removal includes plans to treat at least 2,300 horses from that total with fertility control—double the previous high of 1,160 in 2021—before they are released back onto public lands.

“As one of the agencies charged with the responsibility to protect and manage America’s wild horses and burros, the BLM is prepared to take emergency action where we can in order to save the lives of these cherished animals,” BLM Deputy Director Nada Wolff Culver said in a release. “At the same time, we are committed to continuing our efforts to reduce overpopulation across the West and achieve healthy, sustainable herd sizes that are more capable of withstanding severe conditions, including prolonged drought, which are becoming more frequent due to climate change.”

What will be done with the remaining 19,000-plus removed horses, meanwhile, will be determined by fluctuating parameters of a policy that traces its origin back 50 years, when President Richard Nixon signed into law the 1971 Wild Free Roaming Horses and Burro Act declaring such horses “fast disappearing from the American scene” to be “living symbols of the historic and pioneer spirit of the West.”

Nixon’s signature marked the culmination of a lifetime of efforts by Velma Bronn Johnston, better known as Wild Horse Annie, to protect wild horses and ensure their humane treatment after she personally witnessed mustangs and other breeds being rounded up, hog tied, and slaughtered for chicken feed and fertilizer.

But what was once a decision guided by compassion triumphing over cruelty is more convoluted today. The horses ae no longer “fast disappearing,” and the bill’s policies that, in 1971, were enacted with the intent of saving wild horses have yielded results few animal rights trailblazers envisioned. Protected under the act, populations of mustangs, which derive their name from the Spanish mesteño, or “running wild,” spiked to numbers that ignited concerns among ecologists that invasive overgrazing would damage much of the West’s increasingly fragile ecosystems.

To tame environmental fallout and achieve equilibrium between wildlife and their corresponding habitats, the BLM crafted a framework for ecological sustainability called an “appropriate management level.” As of 2017, the number of wild horses and burros deemed as such was approximately 27,000. In March 2021, officials estimated the actual number stood at over 86,000, a lightning-quick surge from the 67,000 total only five years earlier.

While those numbers certainly jump off the page, the Bureau’s multi-year population management plan, which incorporates fertility control, large-scale gathers, and adoptions, had actually managed to bring the total down from a record-high 95,000 in March 2020.

Still, critics of BLM policies argue that adoption rates have for years failed to keep pace with the soaring number of horses removed from herds and placed in short-term facilities, creating an logjam of animals awaiting adoptions that may never come and steering funds once allocated for long-term pasture care toward ongoing maintenance instead. As a result, many of the animals live out less-than-fulfilling lives in holding facilities while the population of grazers in a progressively arid West continues to swell.

In written and oral testimony submitted in October 2020 to the National Wild Horse and Burro Advisory Board, Tennessee nonprofit The Wildlife Society called the “continued overpopulation of federally managed horses and burros on public lands” a threat to “the ecological integrity of the rangelands,” one that adversely impacts “the ability of wildlife professionals to effectively manage and promote healthy rangelands and native species for future generations.”

Wildlife Society personnel went on to criticize the Bureau of Land Management’s fertility control measures as a means of population deceleration instead of what they view as a necessity: reduction.

And yet, recent adoption totals are up. After averaging only 3,000 adoptions per year from 2012 to 2015, more than 8,600 horses found new homes in fiscal year 2021, the highest total in a quarter-century. That spike was thanks in large part to the BLM’s implementation of the Adoption Incentive Program, which, according to the policy, “provides up to $1,000 to adopt an untrained wild horse or burro.” Higher adoption rates simultaneously help slash “BLM’s recurring costs to care for unadopted and untrained wild horses and burros while helping to enable the BLM to confront a growing over-population of wild horses and burros on fragile public rangelands,” the policy states.

Of the horses placed into private care in 2021, more than half were adoptions facilitated through the incentive program. What’s more, BLM officials have added layers to the adoption certification practices to ensure each animal lands in a compassionate home. Today, interested parties are limited to a maximum of four adoptions over a 12-month period, transfers of adopted animals are prohibited for at least a year post-adoption, and inspections of the animals in private care are commonplace.

“I encourage anyone who is capable of caring for one of these Living Legends to consider giving one a loving home,” Culver said. “These are incredible animals that deserve a chance to thrive with a caring adopter.”

If you are interested in adopting a wild horse or burro through the Bureau of Land Management, you can do so at any of the nationwide adoption events held throughout the year. View the BLM’s adoption event schedule here. For the most up-to-date information on wild horse or burro adoptions, call 866-468-7826. Those who are unable to adopt but want to get involved can explore donation opportunities through BLM’s longtime partner, the Mustang Heritage Foundation.

Epic Fly Fishing in Montana: Learning to Survive and Thrive in the West With Eduardo Garcia

Protect the West: Environmental Charities Working to Save Its Natural Beauty