What you need to know to see the sites, beat the crowds, and pack your necessities 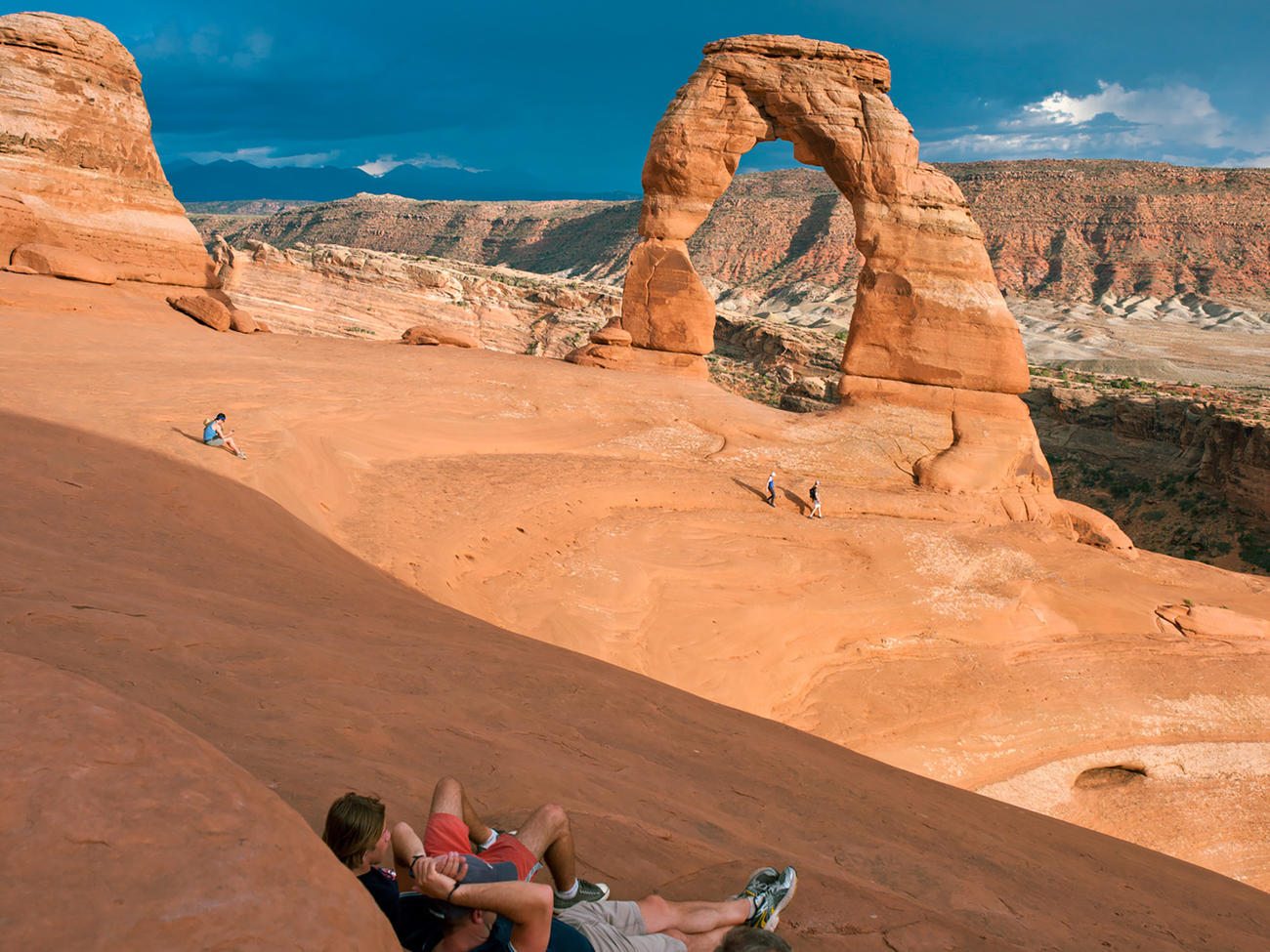 About the park. As far as national parks go, Arches is on the small size—76,359 acres. (For comparison, Yellowstone is 2.2 million acres. Alaska’s Wrangell-St.Elias, the largest national park in the country is more than 6 million acres.) Of course we don’t recommend this, but you could see most of Arches’ major sites in a (very long) day.

Arches is part of the 130,000-square mile geological area known as the Colorado Plateau, which is home to the highest concentration of national and state parks, national forests, wilderness areas, and Bureau of Land Management (BLM) lands in the country. Arches is unique within this area because it is home to over 2,000 arches (with an arch considered an opening with one side at least three feet wide). This makes it the area with the highest concentration of arches in the world. But Arches is not just arches. Like areas in the rest of the plateau, the park also has hoodoos, fins, gargoyles, boulders improbably balanced atop spires, and preserved dinosaur footprints. Look closely at the ground and you’ll see what looks like black soil. This is actually a living community composed of algae, fungi, lichens, and cyanobacteria (one of the planet’s earliest life forms). Don’t step on it. A footprint can last for decades.

Arches’ arches are made from eroded Entrada Sandstone, which was formed in the late Jurassic Period, about 165 to 144 million years ago. Today, the parks’ most famous arches are Delicate Arch (the arch featured on Utah’s license plates), Double O Arch, Double Arch, and Landscape Arch. You can hike to Delicate Arch or drive to a vista of it. Landscape Arch is the longest arch in the national park—it spans 306 feet, more than the length of a football field—and one of the longest known arches in the world. A trail-less area known as Fiery Furnace is a popular place to explore in the park, but permits must be obtained in advance and, because the area is maze-like, it is not recommended to go without a guide

The park’s history. If you tally the total visitation for the last 2,000 years to what is today Arches National Park, 99.9-percent of it would be since 1958, the year Arches’ entrance road was paved.

There is evidence hunter-gatherers migrated into the area about 10,000 years ago. They lived here permanently until about 2,000 years ago, when they began farming and moved farther south. They returned to the area seasonally though. About 700 years ago, these Native Americans, known as Ancestral Puebloans, began leaving and nomadic cultures including the Paiute and Ute arrived. A petroglyph panel near the historic Wolfe Ranch by the trailhead for Delicate Arch is believed to date from this period. In the 19th century explorers of European descent discovered the area, but it wasn’t until the 1880s that Moab was permanently settled. Several decades earlier, the Mormon Church founded the Elk Mountain Mission on the spot that later became Moab, settlers and Utes clashed and the Mormons abandoned the area.

April 12, 1929, just several months before the stock crash that precipitated the Great Depression, President Herbert Hoover signed a proclamation designating 4,520 acres in the Windows area and Devils Garden as Arches National Monument. This original acreage was added to over the years. As of 1949, Arches still had no paved roads, no campground, no designated trails, and no visitor center. Arches was made a national park in 1971.

Planning your visit. Arches National Park is in southeast Utah, about five miles north of Moab and 25 miles south of I-70 on U.S. 191. Denver is about 360 miles northeast. Salt Lake City is about 235 miles northwest. Utah Airways flies into Canyonlands Airport (CYN) a couple of times a week from Salt Lake City, but flights are about $375, one-way. Most visitors fly into Salt Lake City International Airport (SLC) and rent a car. The drive is about four hours. Several companies also offer daily van shuttles between SLC and Moab.

When to go. If you plan to visit Arches in the late spring or anytime during the summer—the park’s busiest times—you’ll have to make reservations for rooms and tours far in advance. It’s understandable why these times are busiest—it’s when most of us get vacation—but for the best weather and fewest crowds, early spring and fall are better. In summer, temperatures here can hover around 110. In early spring and fall, daytime temps are more reasonable—between 50 and 80 degrees. Photographers love Arches in winter, when an average of 11 inches of snow falls. The white of the snow stunningly contrasts with the park’s red sandstone.

Beat the crowds: There are two types of crowds to beat in Arches—car traffic and people traffic. If you go during the park’s busiest times—late spring and early summer—the former can only be avoided by going into the park early in the morning or late in the day. One after during Memorial Day weekend in 2015, the line of cars waiting to get into the park—there’s only one entrance, and it only has two entrance stations—was nearly five miles long. Once you got into the park, it wasn’t much better; there is only one road into and out of Arches. But, at 7 a.m. and starting again around an hour before sunset that same weekend, the line was only several cars deep.

The easiest way to avoid people traffic is to visit Arches during the early spring or on a fall or winter trip. In late spring and summer, your best bet is to, again, go into the park early in the morning or after mid-afternoon.

Year-round, the busiest parts of the park are Delicate Arch and the Windows area. If you’re an experienced hiker and looking to avoid the throngs, head for the Devil’s Garden area. The Fiery Furnace is the ultimate solitude in the park; it requires a permit to enter and only 50 are given for any day.

First-time essentials. Buy any food, drink or general supplies you need before you enter the park. Arches is one of the few national parks with no lodges or general stores in it. You’ll be tempted to start with the park’s most famous arch, Delicate Arch, but know that it photographs best in the evening. Better to start your day with the east-facing Landscape Arch and then hit the Windows area in the afternoon. Finally, end your day with the three-mile round-trip hike to Delicate Arch.

Animal spotting. Arches isn’t much for wildlife. There are animals here—lizards, mammals, and 273 species of birds—but most desert animals evolved to be nocturnal, being most active at night. At Arches these nocturnal animals include mountain lions, bats, owls, foxes, kangaroo rats, packrats, skunks, ringtails, and bobcats. The park’s most visible animals are birds—peregrine falcons, which nest in the park, turkey vultures, hawks, great blue herons, ravens, and eagles.

Nearby places to see Southern Utah is home to five of the most visited national parks—Arches, Canyonlands, Zion, Bryce, and Capitol Reef—in the country. Canyonlands is closest to Arches, but all of the parks are within a half-day’s drive of Arches. It’s also worth exploring Castle Valley and Dead Horse Point State Park, especially if the line to get into Arches is longer than you’d like to wait. When we’re feeling adventurous, we love a sunrise hike to Fisher Towers in Castle Valley, lunch in Moab, and then a short hike or drive in Arches in the evening. When we want a mellower morning, we head for Dead Horse Point. If the Grand Canyon and Arches had a child, that child would look like this State Park, which has mellow trails along its rim a couple of thousand feet above the Colorado River.

Because there are no services in Arches itself, you’ll find yourself spending significant time in the town of Moab, five miles form the park. Moab is more than a place to rest and refuel: its downtown is worth exploring and it has the reputation as one of the best mountain biking and Jeep-ing destinations in the West.