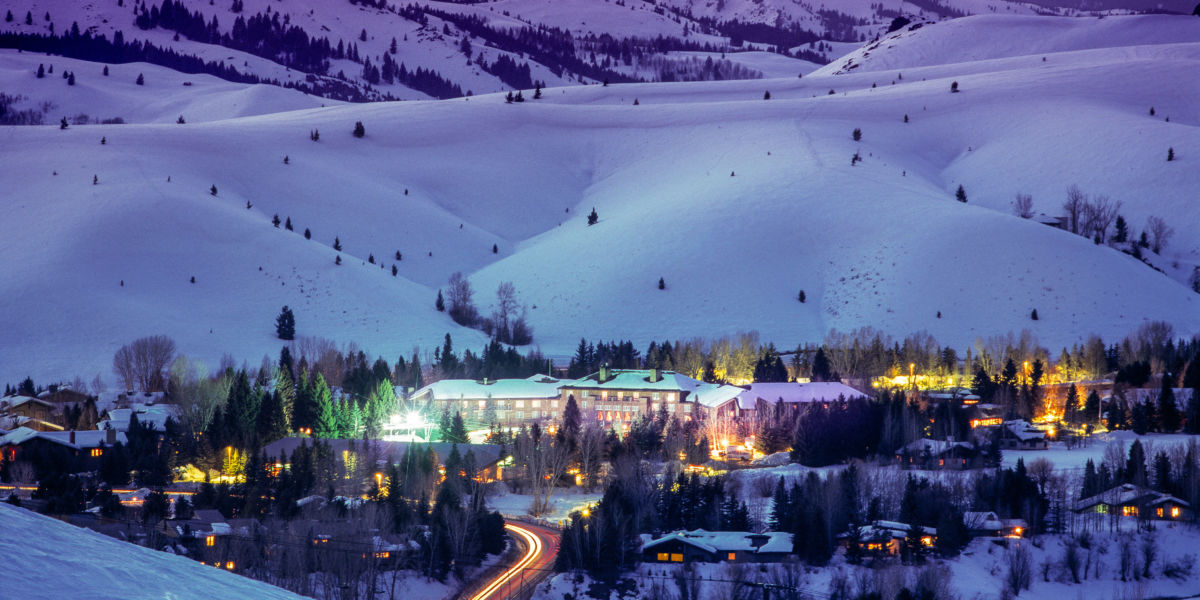 Many alpine destinations in the West will hook you up with demo skis, a stylish hotel room, and a crackling fire, but few do it with the panache of Sun Valley, Idaho. The idyllic valley in the shadow of the Rocky Mountains has been welcoming the rich and famous (along with plenty of regular folks) since Sun Valley Resort opened in 1936. The area’s towns have earned a reputation for being low-key celebrity hideouts (at one time for Ernest Hemingway and Gary Cooper, and, more recently, for Bruce Springsteen, Jodie Foster, and Tom Hanks). But it’s getting ever more enticing for the sort of person who doesn’t have a personal chef (or their own private slope). The most recent hotel arrivals are smart without feeling exclusive, and new breweries, design shops, and performance venues are adding lively places to hang with the crowd. Mostly here for the powder? There’s exciting news on that front too. Courtesy of the Warfield Distillery & Brewery For such a small community—the entire county has just 22,000 permanent residents—the area’s creative output is impressive. Much of the thanks goes to Sun Valley Center for the Arts (sunvalleycenter.org), Idaho’s largest arts organization, which brings in phenomenal exhibitions, outdoor installations, music, dance, film, and lectures. The nonprofit expanded further last year, when actor Bruce Willis gifted it with the painstakingly restored Liberty Theater in Hailey, a neon art deco dream that’s home to the Company of Fools drama group. For the 2018-2019 season, they’re putting on The Miraculous Journey of Edward Tulane (Dec 12–30), adapted from Kate DiCamillo’s charming novel about a china rabbit. Meanwhile, the Argyros Performing Arts Center (theargyros.org), is a recently opened, $15 million venue in downtown Ketchum. The central theater, designed by San Francisco–based performance-space gurus at Auerbach Pollock Friedlander, combines clean visuals with a next-gen digital acoustics system from Meyer Sound. The Sun Valley Summer Symphony (svsummersymphony.org) will take it for a spin in February 2019, when the orchestra kicks off its first-ever Winter Festival with both new and classic works.

Fun, amped-up base camp or whimsical boutique getaway? Ketchum has landed one of each. Ray Gadd/Courtesy of the Limelight Hotel

VIBE: Vivid splashes of purple and lime, flat screens tuned to sports, and performances from live bands drive an energetic scene for families and groups.

ROOMS: Big windows create light-filled spaces, some with fireplaces and views of Bald Mountain, all with sleek kitchenettes for prepping snacks. VIBE: A former motel recast as a modernist outpost that exudes mountain glam. There’s a hot tub and heated outdoor pool, plus snowshoes to borrow for nearby jaunts. Something huge is brewing at Sun Valley Resort’s Bald Mountain ski area (sunvalley.com). By late 2019, the resort plans to open a pristine 380-acre parcel, expanding its accessible terrain by almost 20 percent. A new lift will provide access to a wide-open expanse with glades and vertical runs aimed at stronger skiers and snowboarders, including a formerly off-limits spot that local rope-ducking scofflaws refer to as the Turkey Bowl. Anxious to see it for yourself? Advanced skiers can sign up this season for free guided tours led by a ski patroller and be among the first to carve a path down the slopes. Take a design-forward day trip that starts in Hailey and loops through Ketchum to get a taste of the area’s laid-back luxuries.

9 A.M. Power up with gluten-free muffins and locally roasted espresso at the cute little Black Owl Coffee (blackowlcoffee208.com) in Hailey. 12 P.M. Drive to Ketchum and stop in at Friesen Gallery (friesengallery.com), where Andria Friesen keeps the valley in touch with innovative contemporary art. An exhibition of Tom Lieber’s abstract paintings and Lila Roo Lieber’s ceremonial garments made from discarded plastic opens December 28, 2018. 1:30 P.M. Whether you’re skiing or not, take the gondola  up the flank of Bald Mountain to The Roundhouse (sunvalley.com/dining) and warm up with fondue by the fire while snapping wintry landscapes through the windows.

6 P.M. After a Calico Jack or a gimlet  at the Sun Valley Lodge’s classic Duchin Lounge (sunvalley.com/dining), where a coterie of Old Hollywood stars once hung out, duck into the nearby Sun Valley Inn to dine at The Ram (sunvalley.com/dining). It’s been here since 1937 and just reopened with an elegant new wood-clad interior. The Heritage Menu lets you relive the hearty mountain cuisine of decades past through dishes like Hungarian goulash (1966) and pork schnitzel (1982).

One Perfect Day in Cascade, ID

One Perfect Day in Boise