Giant trees. Gorgeous beaches. Washington's National Park will make a nature lover out of anyone - even city kids 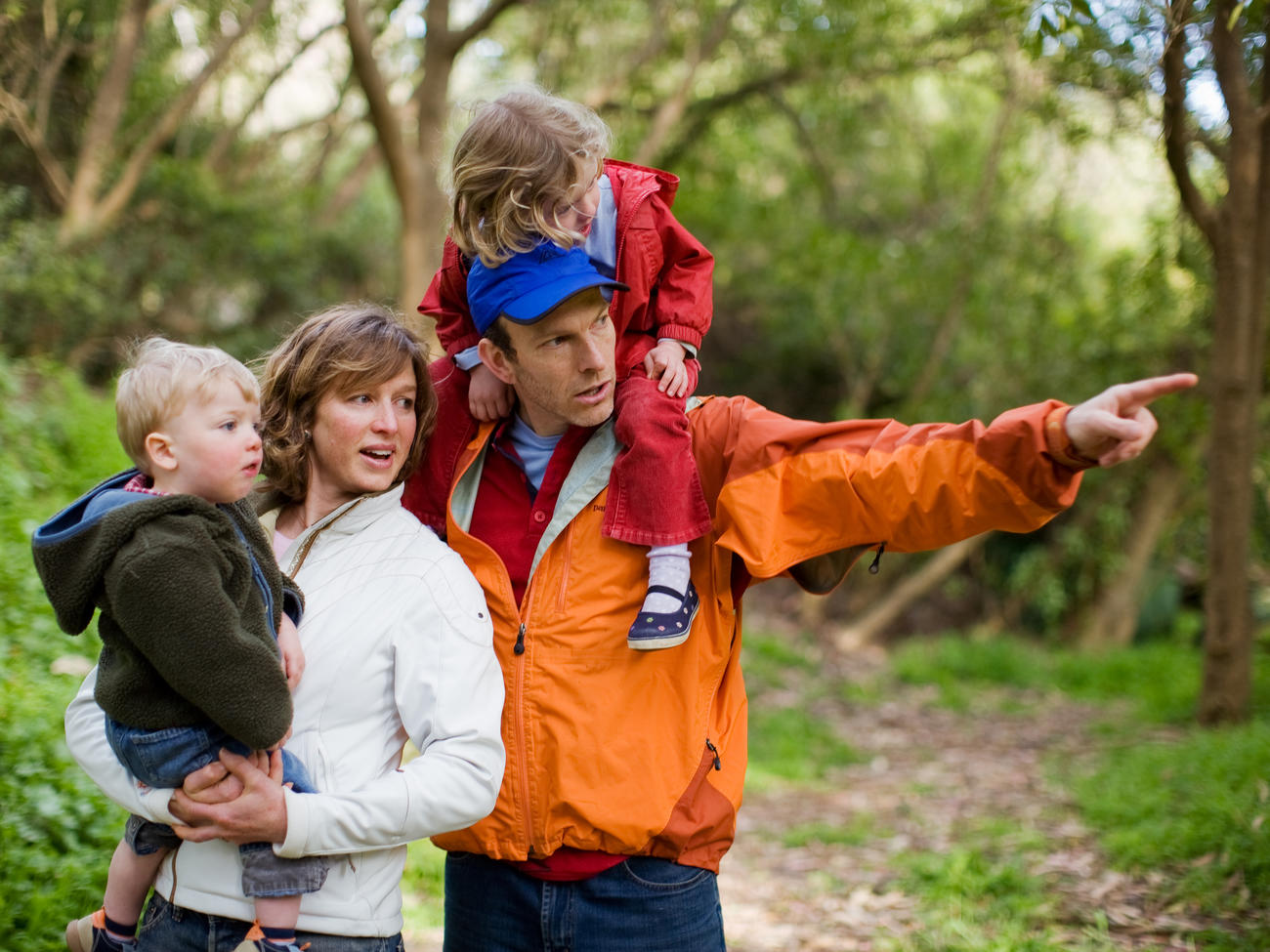 “That’s silly!” laughs Lilli, my 3-year-old daughter, as we come upon a phone booth topped with a thick bed of moss. We’re in Olympic National Park’s Hoh Rain Forest, which, as one of the world’s most well-watered spots, is like a Dr. Seuss book come to life.

Moss covers the railings of the bridge we cross over a creek, and a carpet of duckweed and hornwort floats in the water below. Spruce and hemlock form a dense green canopy above us. I half-expect a green Zizzer-Zazzer-Zuzz to materialize, trailing a tail of moss.

We’re here in the wet northwest corner of Washington because I wanted to show my kids the wow power of nature. My husband, Jeremy, and I worried that our urban children,

Lilli and 1-year-old Toby, wouldn’t come to love the outdoors the way we had. Olympic National Park, with its roster of superlatives ―

green rain forests, tall trees, long beaches, and wild waterfalls ― seemed like just the right place for a crash course in nature. To that end, we’ve planned a six-day tour of the park, starting in the north and circling counterclockwise along the perimeter, staying in a different lodge almost every night and ending at Lake Quinault, an idea that Jeremy hates and Lilli loves. Let the games begin.

Things don’t start well. I had pictured Sol Duc hot springs – one of our first stops in the northwestern part of the park – as a series of remote, wilderness-surrounded springs carved out of the earth. We would be the only people there. An elk might be snacking on salmonberries nearby.

In fact, the hot springs consist of three sulfurous soaking pools of various sizes and temperatures, plus a large, unheated swimming pool. They’re crowded and expensive ($11, $8 ages 4-12). But Lilli and Toby are in heaven. Lilli starts with the swimming pool: She cannonballs in from one side, then runs up and down a ramp on the other, over and over and over until I think we’re both going to freeze. Toby splashes and coos in the shallowest soaking pool with Dad, who shoots me a look that clearly indicates: “Well, whatever. At least the kids like it.”

Sol Duc redeems itself in my eyes when we take the 0.8-mile hike to Sol Duc Falls later that day. We timidly venture out on a bridge that crosses a canyon for an up-close view of three sheets of white water crashing down into a crevasse of black rock.

GRADE
LILLI: C
On what she liked better, the hot springs or the falls: “The swimming pool!”
TOBY: N/A
No comment.

Now we’re en route to the rain forest – the part I’m most excited about, not least because this is where Olympic’s legendary Roosevelt elk live. Lilli is asleep in the back of the car, and the rest of us are stretching our legs alongside Upper Hoh Road, when five elk amble into the meadow across the street, grazing intently as if we weren’t there. I’m thrilled, having longed to see one of these beasts, whose protection was a major reason for the park’s creation. (President Theodore Roosevelt, after whom the elk are named, designated the land a national monument in 1909; it became a national park in 1938.) “Toby, look!” I say, pointing. He looks the other way, at what I can’t even tell. It occurs to me that maybe you can’t teach nature appreciation. Maybe this entire idea is flawed.

GRADE
LILLI: N/A
Asleep.
TOBY: Incomplete
Could the kid just humor me by at least glancing at the elk? Instead, he looks in the other direction, as if he’s got better things to do.

Another day, another entirely different nature environment: Now we’re at Kalaloch Lodge, near the southern end of the park’s 73 miles of coastline. Our cabin is on a bluff less than 100 feet from the beach, and we’re surrounded by gulls (which thrill Toby much more than the elk did). We spend the morning on the beach, the kids playing while Jeremy and I take turns running as far as we can along the sand. I’m intent on making it to Beach 4, supposedly a good smelt-fishing spot. But it’s hard to tell which beach is which; it all just looks like one long stretch of wave-battered beauty. I finally come upon two older women, dressed in rain jackets and galoshes, dipping nets in the shallows. I look at my watch to see that 45 minutes have passed, panic that the kids will be sunburned and sad, and retrace my steps, only to find that they and Jeremy are as happy as clams. They’ve barely noticed my absence.

GRADE
LILLI: A
Giant logs make for great sand structures.
TOBY: B
Sand is not for eating or for stuffing in diapers.LARGEST TREE, DULLEST CATERPILLAR

It’s almost a joke the way so many trees here are billed as the widest, the tallest, or the oldest. At the Hoh Rain Forest, we saw the big Sitka spruce, so huge that it’s marked on the official Olympic National Park map. Now we’re visiting Quinault’s big Sitka spruce, which is 191 feet tall and 1,000 years old. As Jeremy reads the sign to us, I feel someone tugging at my legs. I look down to find Lilli kneeling and pointing at a tiny tree frog resting on a leaf at the base of a nearby tree stump. No bigger than my fingernail, it’s a miniature work of art, leaf green with a black stripe from the tip of its head down each of its sides. Toby, meanwhile, is focused on a plain old brown woolly bear caterpillar. Both kids ignore the giant, venerable tree. But I guess that’s all right, since frogs and even caterpillars count as nature.

GRADE
LILLI: B
“Froggy, go back to your home!”
TOBY: A
On seeing the caterpillar: “Didder didder didder!”

Lake Quinault is the perfect finale to our trip, a truly grand, historic lodge with the feel of a classic summer resort. After six days on the road, it feels heavenly to relax by the lake, and to drink wine with dinner in a picture-windowed dining room while the kids run amok and no one seems to notice.

On our last morning, we take Lilli and Toby down to the beach, just steps from our room. Having decided to end the trip with a bang, I jump into the water, which is shockingly cold and totally invigorating. As I run back to shore, I hear Lilli crying, “I wanted to come with you!”

Which is how I find myself carrying my little girl to the floating dock to jump into the big lake with Mommy. “Hold your breath,” I say, as we take the plunge. She clings to me, grinning. She wants to do it again.

And that’s how I know I needn’t worry that my children might not love nature. They will. They already do. Back on the beach, I dry off Lilli and give her and Toby a group hug. Oh, the places you’ll go.

FINAL GRADE
LILLI: A
On what she liked best: “Four hotels!” But she loved the beach, rain forest, and frog too. A town-and-country girl.
TOBY: A
Loves sand, gulls, and caterpillars. A budding nature boy.

Late summer is the least rainy time to visit Olympic National Park. For general park information, check out nps.gov/olym or call 360/565-3130. For a free travel planner with everything from maps to lodging to suggested day trips, go to olympicpeninsula.org or call 800/942-4042.