Stir up a batch of spooky, smoking, blood-red sangria. 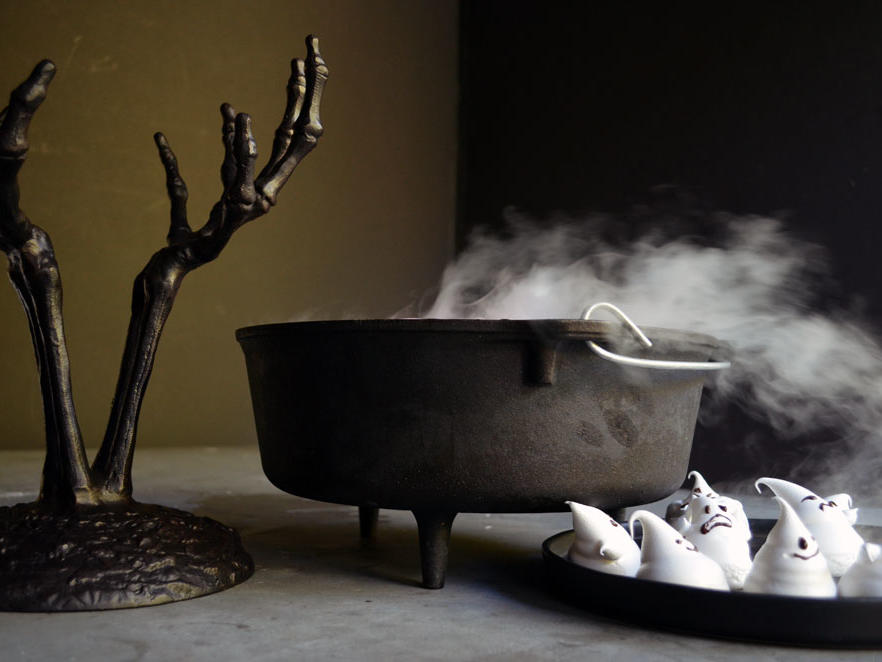 After years of being a lazy Halloweener–no costume, no cobwebs for the home–I’m getting into the spooky spirit of things this year. I’ll be making Emoji Meringue Ghosts. And I’ll be converting an old campground dutch oven into a smoking, seething cauldron of sangria.

Creating the sangria recipe required some research. Clearly it had to involve dry ice, to produce the smoke. But is dry ice safe in a beverage? In short, yes.

A bit more detail: At room temperature, dry ice—which is frozen carbon dioxide, with a temperature of -103.9° F—turns into carbon dioxide gas, the same substance that makes beer and soda fizzy. It’s not toxic in a drink. If you’re surrounded by a dense cloud of dry ice fog in an unventilated area, it could make you dizzy, since it displaces oxygen. However, the amount of smoke emerging from one cauldron of sangria, in a ventilated room, won’t reach that level.

You do not, however, want to touch or ingest the dry ice in its frozen state, since you’d risk getting frostbite. I found it easy to handle the ice chunk with tongs, though. And even though a chunk of dry ice isn’t likely to disperse chips into your drink–it converts (“sublimates”) into gas instead–to prevent even the remotest possibility of chippage, I wrapped the ice chunk in cheesecloth.

OK! With safety concerns out of the way, I focused on creating the cocktail itself. I decided on a fairly classic combination of red wine and brandy, with sliced apples and oranges. I added pomegranate juice and pomegranate molasses to give it a dark, blood-red color. Heh heh heh.

Once the potion is mixed, chill it overnight to let the flavors mingle. For the full recipe, scroll down.

Right before serving the cocktail, I wrapped the dry-ice chunk in cheesecloth. (I’m not actually touching the ice below–I’m twisting the cheesecloth above it before tying the bundle with kitchen twine.)

Lastly, I put the ice in my cauldron and poured in the sangria. Instantly, it began to smoke. Very gratifying! Also gratifying: Once stained with wine, the ice-bundle looked like a body part. Heh heh heh.

So, how exactly is the smoke produced, you ask? When plunged into liquid, the dry ice produces tiny bubbles of extremely cold carbon dioxide gas. When these bubbles rise to the surface and pop above, they instantly lower the temperature of the air, along with the invisible droplets of water present in the air–causing them to condense into fog. Or, seen through Halloween eyes, smoke.

What could be more fun than a cauldron full of seething, smoking sangria? It’s delicious and wickedly strong (use more sparkling water if you want to dilute it a little). Although dry ice is not toxic, it’s dangerous to swallow chips because of the extremely low temperature. Using a chunk of the ice, and wrapping it in cheesecloth, avoids that problem.

1. In a large jar or sealable pitcher, mix together all ingredients except sparkling water and dry ice and chill overnight.

2. Let sangria come to room temperature, then pour into a large cast-iron footed dutch oven or a punch bowl. Pour in sparkling water.

3. Line a colander with cheesecloth. Using tongs, set ice chunk in cheesecloth, then tie cheesecloth closed with twine, or just tie ends of cheesecloth over ice (don’t touch the ice).

4. Lower dry-ice parcel into cauldron. Carbon dioxide gas should start to billow forth immediately and will last about a half-hour. Replenish dry ice parcel if needed.

*Find pomegranate molasses at well-stocked grocery stores, Middle Eastern markets, and online. Food-grade dry ice is available at many grocery stores, often sold by the pound or in 5-lb. chunks. To break it, put it in the sink and crack with a chisel and hammer, and use tongs (not your hands) to pick it up.