Explore the world's best park without the crowds. Here's where to stay and 3 things you don't want to miss 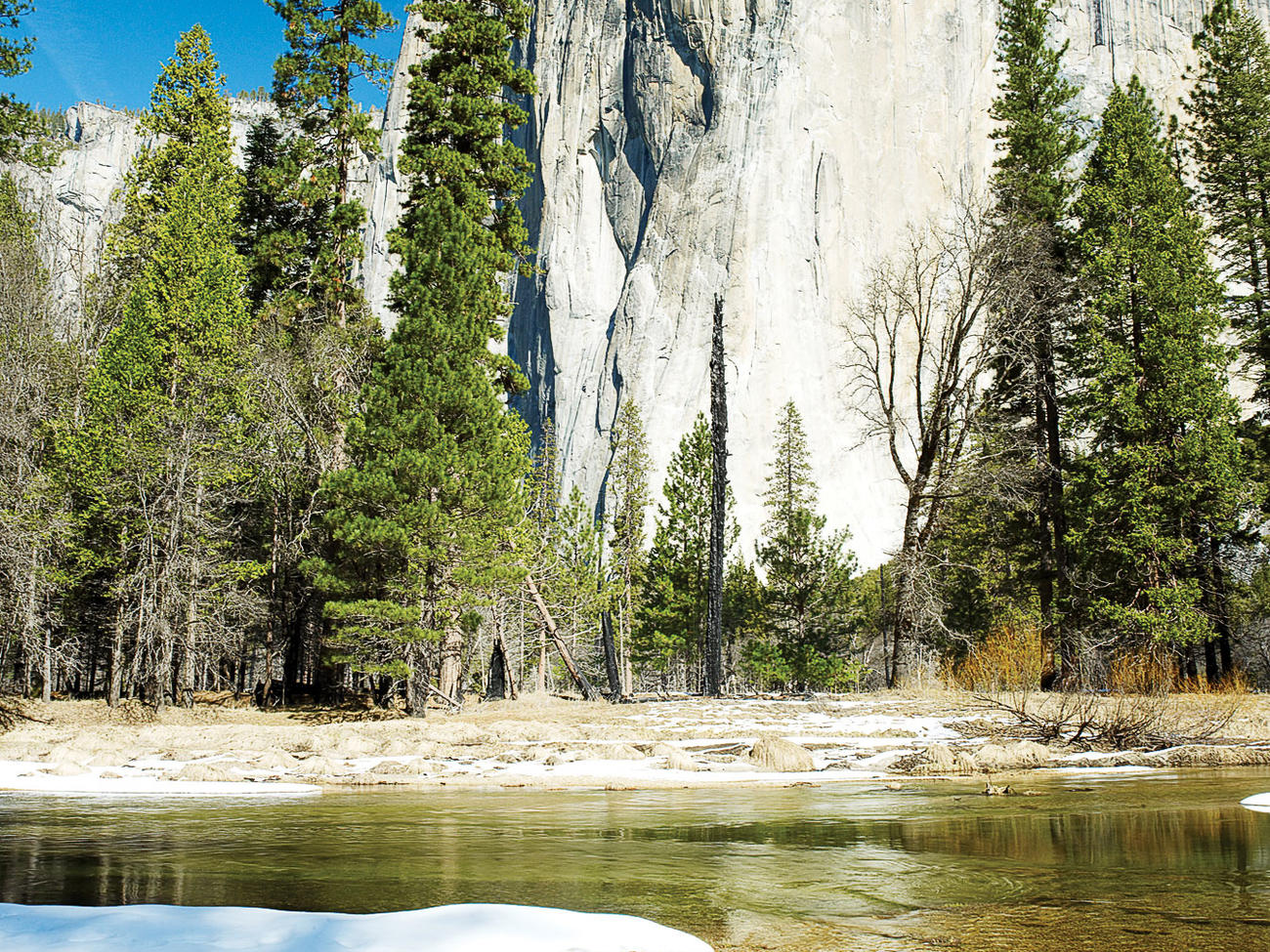 A cold, clear January morning. We have strapped on snowshoes and are tramping the trail that runs from Badger Pass to Dewey Point above Yosemite Valley.

A dozen of us show up, snowshoe novices all. Karen, our leader ― this is a Yosemite Association hike, so we have a leader ― has given us introductory tips, the main one being “Don’t step on your own snowshoes or you will fall on your face.”

The morning is bright but cold, “28 degrees,” Karen reads from her thermometer. Last evening’s storm has feathered the trail and surrounding forest with snow. There are stops for water, for granola bars. Sooner than expected, we reach Dewey Point.

Here we gape. At 7,385 feet, the point is a granite prow that lunges out over Yosemite Valley. But I’m not awestruck. I’m befuddled. I can’t tell where I am. All I see are massive gray granite walls outlined in snow, gorgeous but strange. I could be in the Himalayas. “Where,” I ask Karen, “is Half Dome?” Karen stares at me quizzically. “Right there,” she says. She indicates the large rock face looming straight in front of us. Oh.

But that’s the point of visiting Yosemite in winter. The chance to see it new. In 1872, John Muir wrote ―

No. As much as I revere Muir, he’s part of the problem. Yosemite is one of those places that too many people have loved too well for too long. John Muir’s words, Ansel Adams’s photographs, countless postcards and family snapshots ― all of these make it hard to visit Yosemite without feeling like you’ve already seen it a thousand times.

In winter, I hoped, things would be different. So I brought my wife and son up for a long weekend in January, looking to be astonished.

With a 9-year-old boy in tow, we also required snow fun. On our first day, he and I take the park bus from Yosemite Valley up to the Badger Pass tubing area. Here we climb into specially designed inner tubes, as pneumatic and brightly colored as Teletubbies, and slide down a slippery snow track.

I reach bottom first and rise from my tube. Gaining speed behind me, my son makes a realization: If he steers his speeding inner tube into my shins, he will send me flying into the air. So he does.

At this point I have my own realization. In winter, with far fewer visitors than in, say, July, Yosemite is a very small town. As I tumble upward, everybody looking at me is somebody I’ve already seen elsewhere in the park. Hello again! I want to say, I’m about to break my wrist!

Yosemite winter days possess their own rhythm. Even the most routine national park activity ― the easy nature hike ― takes on the meditative pace of a pilgrimage.

On our second morning, we follow a ranger through a snow-softened valley meadow, acquiring the requisite bits of natural history. In winter, Yosemite’s bears do not hibernate, the ranger says. “They’re in a state of torpor. They hole up in their dens.” But marmots do. “It takes five days for a marmot to wake up in spring.”

Mainly, though, we drink in the Yosemite Valley: the play of bare oak branches against snow, the Merced River flowing dark as tea, and on all sides, the rising granite walls striped by silver waterfalls ― Yosemite, Bridalveil. The tops of both of these falls actually freeze at night, the ranger tells us. Yosemite is, you realize, an inherently wintry landscape, carved out by glacial ice. No wonder it shines in the snow.

One thing that surprises you about Yosemite in winter is that it is quietly, deeply romantic. I learn this fact on my snowshoe hike the next day, when, late in the afternoon, with all of us a little tired and happy for a chance to rest, Karen the guide pauses to tell us a story.

The story is about ravens, birds so common in the park in January that they could serve as Yosemite’s winter totem. A couple of years earlier, Karen says, she’d been snowshoeing this same trail and had spotted a raven couple standing in the snow in front of her. Or a potential couple. The male flew down to present the female with a piece of bright green glass. The female raven was thrilled. She skittered around in the snow as if saying, Really? For me? Then both birds shot up into the air, circling each other, cavorting, in love.

Typical courtship behavior, an ornithologist friend told Karen dismissively. But Karen thought the moment represented something more. Ravens mate for life; the shining gift could have sparked decades of true love. Now, Karen says, each Valentine’s Day she and her husband exchange pieces of green glass.

Thomas J. Story
The elegantly rustic Ahwahnee hotel is an essential stop for coffee or a drink.

That night I have dinner with my wife and son at the Ahwahnee hotel. Rustic, regal, it is one of those public spaces that make everyone look their best. In its candlelit dining room, all adults are distinguished and glamorous, all children (including ours) strangely well behaved, like children in Masterpiece Theatre.

We order our wine. We order our Shirley Temples. We see snow falling softly outside, white petals against the enveloping night. I feel phenomenally fortunate. After a second glass of wine, I tell the raven story. If I had a piece of green glass, I say to my wife, I would give it to you.

THE SOUND OF ASTONISHMENT

The short vacation glides forward, like a skier in new snow. There is skiing, back up at Badger Pass, and also cups of hot chocolate. There is Scrabble by the Ahwahnee fireside, and whiskey at the Ahwahnee Bar, and, best of all, ice-skating at Curry Village, where you whirl around genteelly on bumpy ice in the shadow of Half Dome while a scratchy PA system plays “Love Will Keep Us Together.”

“I didn’t break anything,” says one dad as he pulls off his skates and sits down to grill s’mores on the rink’s firepit. “I call that a win.” I do too.

But suddenly it’s our last morning in the park. I wake up early and sore from ice-skating and grumpy about having to go home. My wife and son being marmot-like slow risers, I decide to start packing.

I carry a suitcase into a very cold winter dawn. No sun yet, but the sky has brightened from black to deep blue. A crescent moon casts silver light across the valley.

It is silent except for the crunch of snow under my boots. Then other noises: the slam of a car door, more boots on snow. In the moonlight, I see two guys in backpacks struggling beneath the weight of climbing gear ― ropes, pitons, axes.

I had seen them before, of course, in line for lunch at Yosemite Village. Now I ask where they’re going. Washington Column, they say, an 1,800-foot-high granite wall on the valley’s north side. They’ll climb all day and bivouac 1,000 feet up the side of the cliff tonight.

THE MEANING OF DAYBREAK

I don’t climb; I am in awe of climbers. I slow them down with dumb questions. Where did they learn to climb? How long have they been climbing in Yosemite? And, finally, “Is it different climbing in winter?”

“Actually,” his buddy says, “this is our first winter climb.”

There’s light now, just enough to let you take a snapshot with a disposable camera, which they ask me to do. They pose, grinning and maybe a little scared. I snap the picture and they head off.

Now the sky is bright and pale, like the inside of a shell. The crescent moon is fading. The valley is waking up.

Right then, I feel that I’ve taken in Yosemite’s winter on my own terms and at last have room to hear what Muir said about it: From wall to wall of our beautiful temple, from meadow to sky was one finished unit of beauty, one star of equal ray, one glowing sun, weighed in the celestial balances and found perfect.

Maybe minutes later, maybe an hour, I hear it. A crack, then a crash, like a cannon shot but vastly louder. The ranger had told us about this phenomenon too, but I hadn’t expected to experience it. When morning sunlight warms the frozen top of Yosemite Falls, the ice melts, splinters, falls in sheets to the base a thousand feet below. The noise of that fall is thunderous.

You hear the word “daybreak,” but this is the first time I understand what it means. Day is breaking, with an icy roar that bounces from one side of the valley and back again. It’s a sound I’ve never heard before. Something astonishing, something entirely new.

Yosemite National Park is 200 miles from San Francisco and 300 miles from Los Angeles. Snow is likely; drivers are required to carry chains, and four-wheel-drive is recommended. The visitor center offers guided walks. INFO: $20 per vehicle; 209/372-0200.

Park insiders agree ― these are the sights you’ll always remember:

2. Listen to Yosemite Falls Hear the crash of melting ice an hour or two after sunrise. But any time of day, the falls are Yosemite’s melody in winter.