The new Star Wars-themed land is finally open! Here are the top things to do and see 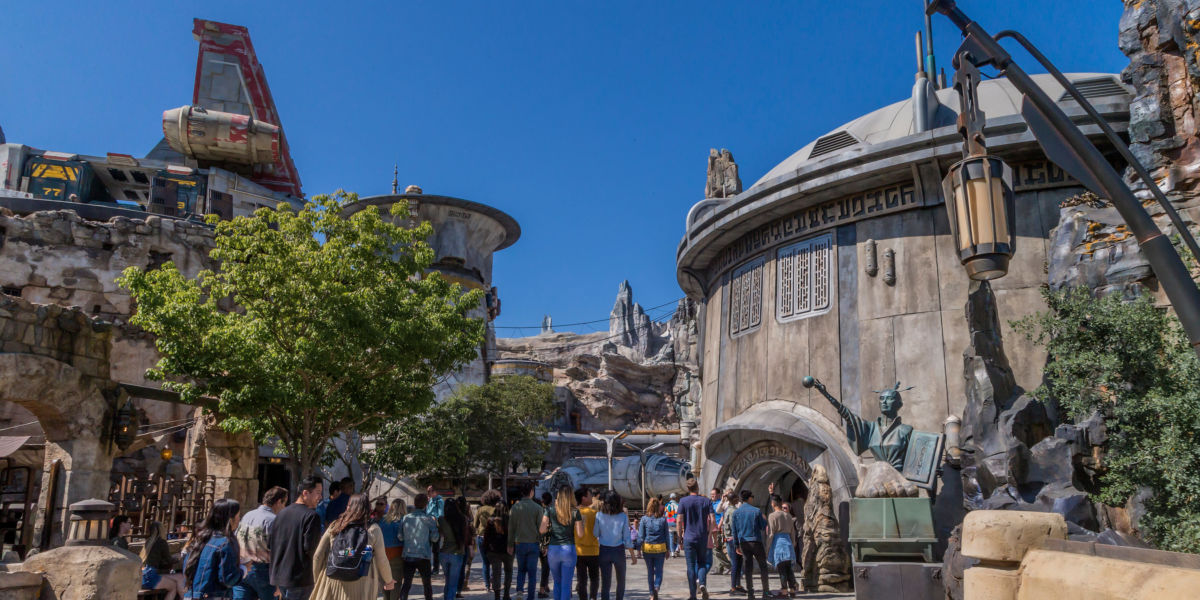 Please read our updated guide about Disney reopening for the most current information.

Disneyland has debuted its largest single-themed land yet, the long-awaited 14-acre Star Wars: Galaxy’s Edge. (For you Disney nerds, Cars Land, which debuted at California Adventure in 2012, is a smidge smaller at 12 acres.) The $1 billion out-of-this-world project was a six-year collaboration between Disneyland Imagineers and storytellers at Lucas Film.

What sets this land apart from its seven neighbors is that it’s designed to be a fully immersive, interactive, tech-rich experience. The Galaxy’s Edge story unfolds according to the current trilogy of Star Wars films, set at Black Spire Outpost on the planet Batuu. Known as Wild Space, this vibrant port is notorious for attracting smugglers, traders, and more.

Along the route (pictured above), guests will discover resistance aircraft and an ambient soundtrack of engines humming and pilots chattering. But that’s not all they’ll encounter—characters from the films make their appearances, from Chewbacca to a pack of Strom Troopers who won’t hesitate to interrogate suspicious characters, even the kiddos. And the planet may be Batuu, but the landscaping is pure California native. Shrubs and trees are tucked at the bottom of giant rock formations and ancient ruins where spheres as high as 130 feet tall loom overhead. Hang in the main hold lounge inside Millennium Falcon: Smugglers Run before taking the controls on your mission.

The main entrance leads to the land’s anchor attraction, Millennium Falcon: Smuggler’s Run. This ride has fans plenty smitten. The iconic aircraft dubbed the “fastest hunk of junk in the galaxy” is famously piloted by Han Solo and Chewbacca. Spanning more than 100 feet, this is the first full-scale model ever built.

In this immersive, gameplay ride, Chewbacca has agreed to loan the Falcon to the pirate Hondo Ohnaka, who hires a crew of six (you, the rider, are one of them!) for a wild mission. On the way to the cockpit, everyone is assigned a task as either a pilot, gunner, or engineer. When the ride starts, guests launch into hyperspace, take on enemy fire, and dodge obstacles. And the best part is that the outcome varies with each ride, depending on how well the crew flies and defends itself, so repeat rides promise a different experience each time. Creative concoctions from around the galaxy at Oga’s Cantina.

Please note that Oga’s is temporarily closed. It’s expected to reopen, but until then, enjoy some of Oga’s signature cocktails at home.

After that oh-so-close call with death on the Falcon, you might need a drink—and for the first time at Disneyland, guests can grab one inside a bar at Oga’s Cantina. This happening watering hole is exactly what you might expect from a Star Wars bar, from the ripped-from-the-big-screen decor to exotic cocktails like the Jedi Mind Trick and mocktails like the Hyperdrive. The spot is hopping in part due to the tunes spun by DJ R-3X, who guests may recognize as the former Starspeeder 3000 pilot from Disneyland’s Star Tours attraction.

Unlike other lands, guests won’t find mouse ears or Mickey-shaped ice cream bars in these parts. Instead, every bite, drink, and bit of merchandise here are Star Wars-inspired, including the famous blue milk that Luke Skywalker drank during a family meal in Star Wars IV: A New Hope. This refreshment is in fact dairy-free with a tropical twist and served at the aptly named Milk Stand. Another favorite eatery is Ronto Rosters, for its Ronto Wrap (spicy sausage topped with slaw, wrapped in a pita) along with sweet and spicy turkey jerky. Docking Bay 7 Food and Cargo has a vast menu including some out-of-this-world desserts like the Battu-Bon made up of chocolate cake, white chocolate mousse, and a tangy coffee custard. (Note that Docking Bay 7 is temporarily closed, but is expected to reopen.) All the moving parts you’ll need to build your own at the Droid Depot.

Bring Some of Batuu Home

Retail shops are an experience in themselves. Guests can craft their own light sabers (from $220) at Savi’s Workshop, which is disguised as a scrap metal shop to deter the First Order. Wish you could have a BB8 or R2D2 of your own? Pop in to Droid Depot and grab parts from moving conveyer belts to build and activate a cute little droid. An eye-catching marketplace features Resistance fashions, a cool creature pet shop, and a toy store filled with whimsical stitched dolls and wooden instruments.

Tap into the Dark Side

Finally, Galaxy’s Edge also allows guests to interact behind the scenes via the Play Disney Parks mobile app. The app experience includes hacking some of the droids, scanning cargo crates to learn what’s inside, translating signs from the native language of Aurebesh, and tapping into antennas to eavesdrop on character’s conversations. The app also features the game “Outpost Control,” wherein guests can choose to team up with the First Order to help spy on the Resistance. The game ends when the Dark Side completes their spy mission or the Force successfully fends them off. Download the app and file it away for when you have to keep the kids entertained on long wait time for a ride.