Here’s your to-do list for San Diego, whether you have just a day or a whole long weekend to play with 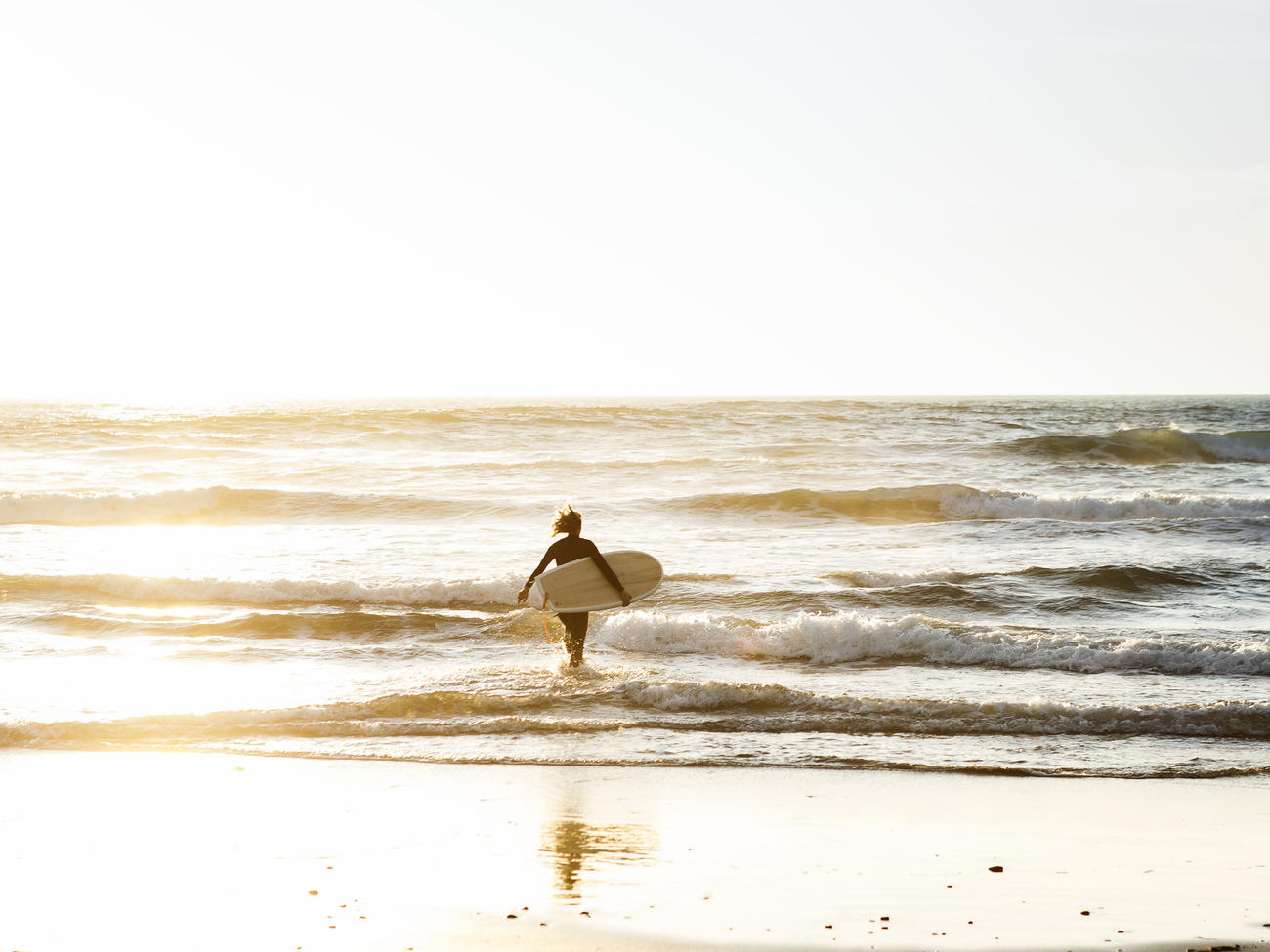 Zia Soleil / Getty Images
Written by Christine Ryan November 19, 2015
Share this story
For decades, visitors came to San Diego for its always fair weather, sparkling beaches, and SeaWorld. If you wanted a cool West Coast city playground, though, you went to San Francisco or L.A. But that’s no longer the case. Both border town and edgy Pacific Rim city of the future, San Diego has an immigrant population infusing its neighborhoods with new flavors and attitudes. Will you find gorgeous beaches and surfer dudes? Of course. But they no longer define San Diego.

Where to Eat and Drink

Holsem Coffee. This North Park spot is a nod to the sophisticated coffee parlors of London. Cofounder Salpi Sleiman, who led the mobile coffee-cart collective Roast Coach Coffee Bar, has developed seven roasts and 17 coffee mocktails. Blended with housemade nut milks, malts, fruit purées, and syrups, the libations range from banana bread cold brew to La Vie en Rose, a cappuccino infused with cardamom and rosewater, then garnished with rose petals. $; 2911 University Ave., San Diego; holsemcoffee.com. A.R. Valentien. The wood-beamed dining room pays homage to Craftsman architects Henry and Charles Greene, with stained-glass lanterns and handcrafted wood-framed windows. We love how A.R. Valentien integrates indoors and outdoors: The terrace has a sweeping view of the famed Torrey Pines golf course out to the Pacific. Valentien was locavore before we had a word for it with such knockout dishes as duck breast and confit leg, and black trumpet mushroom–crusted sea bass. $$$$; 11480 North Torrey Pines Rd., La Jolla; arvalentien.com. Kettner Exchange. The menu spans American, Thai, and Italian flavors, including the spicy tofu coconut soup with shiitake mushrooms, bok choy, and fresh cilantro, and the not-to-be-missed zeppole dessert, a deep-fried, cream-filled Southern Italian delicacy. Food aside, the two-story Little Italy stunner includes a salvaged tree branch chandelier in the downstairs dining area, a lounge-like rooftop with private cabanas and a swinging daybed, and a well-heeled crowd to match. The result? A see-and-be-seen vibe with substance and serious culinary cred. $$; 2001 Kettner Blvd., San Diego; kettnerexchange.com. Juniper & Ivy. Top Chef: All Stars winner Richard Blais has dubbed his rotating seasonal dishes “Left Coast” cuisine, a play on both the menu’s progressive experimentation and its Pacific Coast sourcing. His cleverest nod to California cuisine is unlisted, however: Be sure to ask your server about the secret, off-the-menu In-N-Haute Burger, made with a special blend of ground short rib, brisket, and chuck mixed with dry-aged beef fat and served with bread-and-butter pickles, mustard-grilled onions, and special sauce on a brioche bun—a tastier take on the fast-food classic. $$; 2228 Kettner Blvd., San Diego; juniperandivy.com. Ironside Fish & Oyster. Executive chef Jason McLeod earned two Michelin stars at upscale Ria, in Chicago, but at Ironside, he’s aiming for approachable takes on seasonal seafood, from whole golden-spotted bass from Baja, cooked a la plancha, to scallop ceviche with fresh citrus, pickled tomatoes, avocados, and olives. The restaurant’s nautical decor includes a live lobster tank, a wall decked out with 3-D piranha heads, and copper and brass light fixtures. The best seat in the house is at the bakery bar—a 26-foot-long solid oak table where you can watch the pastry chefs make buttery brioche buns for lobster rolls and spelt loaves spiked with salty toasted seaweed. $$; 1654 India St., San Diego; ironsidefishandoyster.com. Stone Brewing World Bistro & Gardens. Liberty Station’s relaxed, retro feel—80 acres of mostly 1920s buildings set amid broad lawns—lured Escondido craft-brewing pioneer Stone to choose it for its second location. There’s a brewery, a bocce ball court, a half-acre garden, and an outdoor theater. The restaurant’s menu concentrates on upscale brewery fare like a duck taco trio with Stone Levitation Ale barbecue sauce. As for the brews, check out the small-batch seasonal beers or the perennial favorite, hoppy Stone IPA, which helped put San Diego on the world’s beer map. $$$; 2816 Historic Decatur Rd., San Diego; stonelibertystation.com. Monello. This casual restaurant from the folks next door at Bencotto is an homage to Italian street food. That means incredibly thin, light pizzas topped with fresh ingredients, a rich homemade spaghetti carbonara, and a delight called the drink of the people: housemade vermouth with 27 herbs and botanicals. Inspired by the city of Milan, the ambience is modern with a touch of medieval. If you go at Aperitivo Hour, your cocktail comes with free small bites like squid ink gnocchi, but the best time to drop in might be brunch, for the cornetti: Italian-style croissants stuffed with fillings such as not-too-sweet strawberry- and-prosecco jam, or chocolate or vanilla custard. $$; 750 W. Fir St., San Diego; lovemonello.com. Tiger!Tiger! Hard to believe, but there are very few places in San Diego where you can enjoy craft beer outdoors, which is why Tiger!Tiger!’s beer garden is such a welcome addition to the neighborhood. In keeping with the rustic, industrial theme of the interior, virtually everything in the back patio area has been reused or recycled, from gates made of wooden pallets to picnic tables found on Craigslist. Soak in the scene, down a pint or two, and enjoy the elevated pub grub alfresco. $$; 3025 El Cajon Blvd., San Diego; tigertigertavern.com. Polite Provisions. Pre-Prohibition cocktails with a West Coast twist, like the Misty Mountain Buck—rye, homemade ginger beer, fresh lime, pineapple, and bitters— are made to order, while others, like a Paloma with housemade grapefruit soda, are served on draft. The marble-topped bar is a throwback to the golden age of the drugstore, but the “chef’s table,” where guest bartenders from around the country host classes and tastings, is totally new wave. $$; 4696 30th St., San Diego; politeprovisions.com.

La Valencia. High on La Jolla’s coastal bluffs, La Valencia long reigned as one of the chicest hotels in SoCal, but time started to get the best of the property. Now, gone are the old wooden shutters and 8-foot-high hedges that kept the property feeling dark and unwelcoming. The exterior got a fresh coat of its signature (and still delightfully kitschy) cotton-candy pink paint, while all 112 rooms were modernized. The old Whaling Bar reopened as a French art deco–style bistro, called Café la Rue, which is decorated with vintage murals of France. $$$$; 1132 Prospect St., La Jolla; lavalencia.com. Hotel del Coronado. With its towers and beach cabanas clustered like villages, Hotel del Coronado just may have been Baum’s inspiration for the Emerald City. After all, he wrote Oz while he was staying at this glamorous spot, which has hosted presidents and movie stars and was the setting for the 1959 film Some Like It Hot. Pets overnighting at the hotel are treated like minor celebrities in their own right: They get special bedding and gourmet room service. $$; 1500 Orange Ave., Coronado; hoteldel.com. Estancia La Jolla Hotel. The Estancia La Jolla Hotel feels like a south-of-the-border secret where the ocean soothes you to sleep. Before the sun sets, pick up a map in the lobby, then stroll through the garden of cactus, roses, birds-of-paradise, and California natives that accent the adobe-style buildings. $$$; 9700 N. Torrey Pines Rd., La Jolla; estancialajolla.com. Hotel Indigo. Stay here to experience a LEED-certified sustainable hotel in the heart of the Gaslamp Quarter, with a 4,000-square-foot green roof to insulate the hotel and reduce energy consumption, plus dog-friendly rooms and 24-hour room service. Don’t miss the view from Level 9, the rooftop lounge on the ninth floor—pull up a couple of wicker chairs around the firepit, order a local microbrew or two and a few appetizers, and wait for the first pitch at Petco Park across the street. $$$; 509 Ninth Ave., San Diego; hotelinsd.com. The Pearl Hotel. A block from the harbor, this vintage motel turned boutique hotel has kept its spirit with classic cocktails and Wednesday night movies year-round by the kidney-shaped saltwater pool. Nab a lounge chair before show time; afterward, head back to your room with a platform bed and va-va-voom mirrored ceiling. $$; 1410 Rosecrans St., San Diego; thepearlsd.com.

San Diego Natural History Museum. Wandering through the permanent exhibit Coast to Cactus in Southern California feels like sneaking onto a movie set. An Airstream trailer sits alongside a starry-lights display, designed to resemble a desert at night, and a midcentury modern patio overlooks an imitation San Diego canyon. You’ll find near-exact replicas of Torrey Pines State Park along with all the region’s other habitats—everything from mountain forests and ocean bluffs to coastal sage. San Diego County has the highest biodiversity in the continental United States, and Coast to Cactus underscores the point. $$; 1788 El Prado, San Diego; sdnat.org. Legoland. Unlike Disney World or the DMV, Legoland can be tackled with relative ease in a day. Your best bet is the Resort Hopper, which gives you access to the amusement park, Sea Life Aquarium, and the  Legoland Water Park. To hit the bricks full-tilt, book a stay at the Legoland Hotel, near the park’s front entrance. Guests get in-room Legos, poolside movies, and an hour’s head start at the park when it opens. $$$$; 1 Legoland Dr., Carlsbad; california.legoland.com. Women’s Museum of California. In 30 years this museum has grown from one woman’s own collection of memorabilia into a celebration of women in the West, and one of the premiere women’s art museums in the country. $; 2730 Historic Decatur Rd., San Diego; womensmuseumca.org. La Jolla Shores. For new surfers, nothing beats La Jolla Shores. You’ve got long, gentle waves and a nice sandy bottom. And the locals who surf there are welcoming to beginners. It’s also a good family beach, sporting a playground. $; 8200 Camino del Oro, San Diego. Waterfront Park. If you haven’t been to San Diego lately, it’s worth going just to experience this 12-acre paradise situated between San Diego Bay and the city’s 1938 Spanish colonial revival–style Administration Building. Waterfront Park emerged from a pair of parking lots and now boasts gardens, a playground, interactive fountains, picnic areas, and a large greenbelt for festivals, concerts, outdoor movies, and Monday evening yoga classes. $; 1600 Pacific Hwy.; sandiegocounty.gov/parks/Waterfrontpark.html.

Pigment. Just when we thought our favorite North Park shop couldn’t get any cooler, it surprises us with the Plant Lab terrarium bar. Glass orbs hang from above, and the shelves are lined with apothecary jars, plants, mosses, and colored sands—all the elements to make your own garden in a bottle. Feeling overwhelmed? Pick up one of the already-assembled kits (from $25), or sign up for a two-hour workshop to learn the ins and outs of preserving your own little landscape. $$; 3801 30th St., San Diego; shoppigment.com. Aloha Beach Club. Find authentic surf gear and sunglasses—artist-driven stuff that you can’t buy at the drugstore. The store’s clothing label, Aloha Sunday, makes its own button-downs and board shorts. Wearing an Aloha Sunday shirt screams: “I’m a local.” People know that you got it in San Diego. $$$; 3039 University Ave., San Diego; alohasunday.com. Seaside Papery. This locally owned paper- and home-accessories store, which stocks embroidered cocktail napkins, letterpress stationery, and wrapping paper, is worth a peek inside. For one thing, it’s housed in The Headquarters at Seaport District, which used to be a police station and still has some jail cells. $$; 789 W. Harbor Dr., San Diego; seasidepapery.com. Graffiti Beach. Graffiti Beach was a pop-up shop on Abbott Kinney Boulevard in Venice Beach before moving for good into South Park’s historic 30th and Fern building. The garage door–fronted space is filled with quirky art, jewelry, and clothing from emerging designers and artists with a conscience, like Mukee, a Denver-based company that makes jewelry and accessories from reclaimed skateboards. Attention, shop-local types: Three-quarters of the designers are from California. $$; 2220 Fern St., San Diego; shopgraffitibeach.com.