Here’s your to-do list for San Francisco, whether you have just a day or a whole long weekend to play with 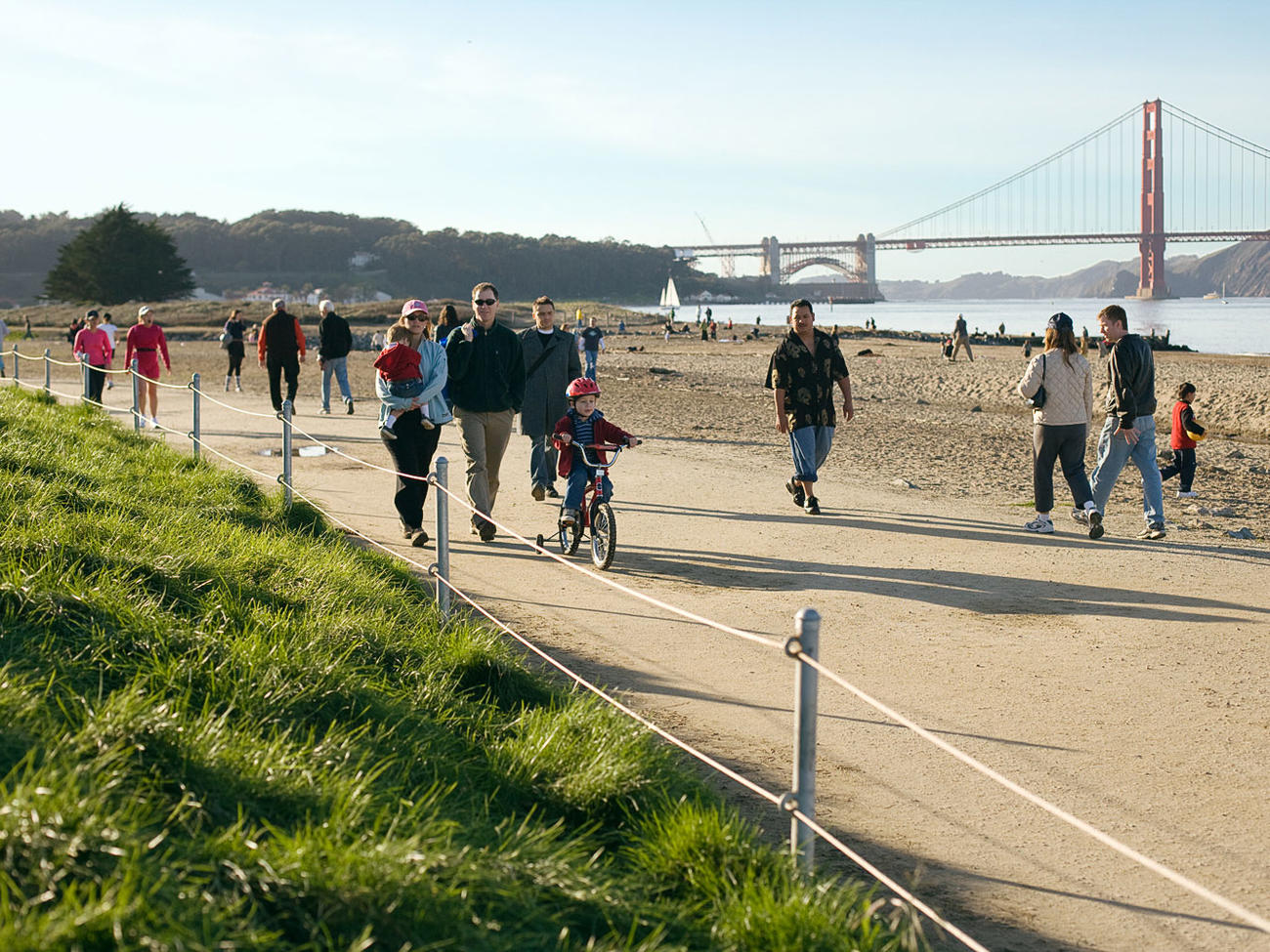 Thomas J. Story
With iconic views of the San Francisco Bay, Crissy Field's shoreline provides beaches and picnic tables perfect for enjoying
Written by Christine Ryan October 19, 2015
Share this story
From the Marina to the Mission, from Dogpatch to the Outer Sunset, this city is in a ferment of creativity right now—culinary, artistic, and of course, technological. In fact, the flush times in the digital world are fueling a mini-boom of new brick-and-mortar restaurants and bars and shops. WHERE TO EAT AND DRINK

AL’s Place. Yes, AL’s Place sounds like a diner. But “AL” is Aaron London, who last cooked at Ubuntu, Napa’s erstwhile temple to vegetables, so the cooking is anything but short order. His mind-set remains veggie-centric, with a few of the meant-to-be-shared mains involving seafood. (The cured trout with potato chunks and green-fig mousse is a winner, especially for lox lovers.) Meat is relegated to the side dishes, and the hanger steak with sherry butter does complement an entrée of goat’s-milk curds and fennel over grits. Which is about as close to down-home as this food gets. $$; 1499 Valencia St.; www.alsplacesf.com.

The Progress. With demand for provisions at their home base State Bird Provisions unrelenting, Stuart Brioza and Nicole Krasinski launched a new place next door. The Progress leans toward a dinner party format: family-style service, with your choice of six dishes. Modernist musings like matsutake mushroom dumplings, with sake leeks and kale, give way to mains such as lamb scaloppine with pea shoots and cipollini onions, followed by desserts of honey-cocoa ice cream, and jasmine tea–poached pears with plum jam and ricotta whey. Seats get snatched up swiftly in the two-story space, which operated as a theater in the early 1900s. A century later, it is part of the hottest twin billing in town. $$$$; 1525 Fillmore St.; theprogress-sf.com.

Rintaro. The menu here changes each night and usually takes some explanation. On one recent evening, the through-line was niboshi (tiny dried sardines). It was mixed with candied walnuts and chile powder as a bar snack, incorporated into a cloud of bonito shavings on top of flanlike tofu, and presented in an antique blue porcelain dish. The Mission District restaurant—all warm wood and comfy booths—is inspired by the izakaya tradition: charcoal grilled meat accompanied by lots of beer and sake and laughter. The atmosphere isn’t so much raucous after-work blowing-off-steam, though, as it is genteel, nice dinner-out. $$$$; 82 14th St.; izakayarintaro.com. Cockscomb. Incanto vet Chris Cosentino, a chef known for celebrating unsung proteins, goes whole hog in his showy SoMa project, where the kitchen stuffs its meat pies with snails and pork belly, and a roasted pig head turns up fit for sharing at your table and on Instagram. Diners disinclined toward Game of Thrones–style feasting can find lighter fare in platters of raw shellfish and pickled sardines with lively giardiniera. But there’s no mistaking the aesthetic of a menu that features beef heart tartare and a little gem salad flecked with crispy pig skins. It’s tail-to-snout eating, riding high as an urban trend. $$; 564 Fourth St.; cockscombsf.com. The Interval. Housed in the Fort Mason headquarters of the Long Now Foundation—the private nonprofit behind such quirky-yet-yet visionary projects as the 10,000 Year Clock—this cafe-bar may sound mildly out of place in theory, but it’s perfectly delightful in practice. (Thanks in large part to the involvement of noted bartender and booze historian Jennifer Colliau.) Look for the Midas Touch, from Dogfish Head Brewery, a spiced beer based on a 3,000-year-old recipe pulled from Midas’s tomb and, from a northern Italian winery called Pelissero, an award-winning Barbera-Nebbiolo blend named in honor of the foundation. $; 2 Marina Blvd.; theinterval.org. Smokestack. A soaring warehouse in the Dogpatch has been dressed up in the manner of a post-Depression bar, with distressed wooden floors and old newspapers pasted on the walls. The patrons work hard at being throwback, their Deadwood-era beards and retro denim establishing a look that verges on self-parody. The barbecue, however, is no joke. Dennis Lee, the chef and co-owner of Namu Gaji, oversees the smokers, producing a classic-modern mix that ranges from Thai sausage and crisp-skinned smoked duck to Wagyu beef brisket in a traditional Texas-style rub. Vinegar- and kimchi-spiked sauces shine, as do sides like housemade slaw and baked beans with burnt ends. It’s all served over the counter, on metal trays lined with butcher paper, just as in the olden days. $$$; 2505 Third St.; magnoliasmokestack.com.

Locanda. Delfina introduced the Mission to the best of Tuscany. For their second serious restaurant, Craig and Annie Stoll looked to Rome for inspiration. Locanda’s glossy interior carries a whiff of Marcello Mastroianni: geometric white tiles and ’60s-revival light fixtures. Get the pizza bianca with whatever the topping is, a plate of carbonara, and anything from the offal section of the menu. The wine list is filled with obscure, not-too-pricey Italian labels, and the bow tie-wearing bartenders mix maybe the best negroni in town. $$$; 557 Valencia St.; www.locandasf.com.