It’s easy to see why the architect nicknamed this remodel project “The Garden House.” When architect Jay Coupard was brought in to consult on a construction budget for adding a second floor to a Seattle home, it was easy to see that that wasn’t the best route. Not only was the project not right for the working budget, but also it wouldn’t allow the homeowners to truly appreciate the greenery surrounding the abode. “Maintaining a single-level house was the best use of their budget and best opportunity to allow the garden spaces to influence the home and not be dominated by a taller two-level structure,” says Coupard.

Instead, Coupard and his team focused on a gut remodel of the single-floor home, adding an additional 750 square feet. Once construction was complete, designer Andy Beers of Ore Studios was brought on board after the family realized the furniture they had wasn’t going to work in the new space. “We helped [the homeowners] define how they wanted the furnishings and decoration to feel, and then sourced pieces that supported this point of view,” says Beers. During the remodel, Coupard left some of the exterior masonry and siding intact, while enlarging the stone patios for a new indoor-outdoor layout. “The flagstone entry patio is surrounded by mature planting beds as well as a raised vegetable garden. Each side of the garden receives light at different times of day, and this patio is often used in the evening,” says Beers. 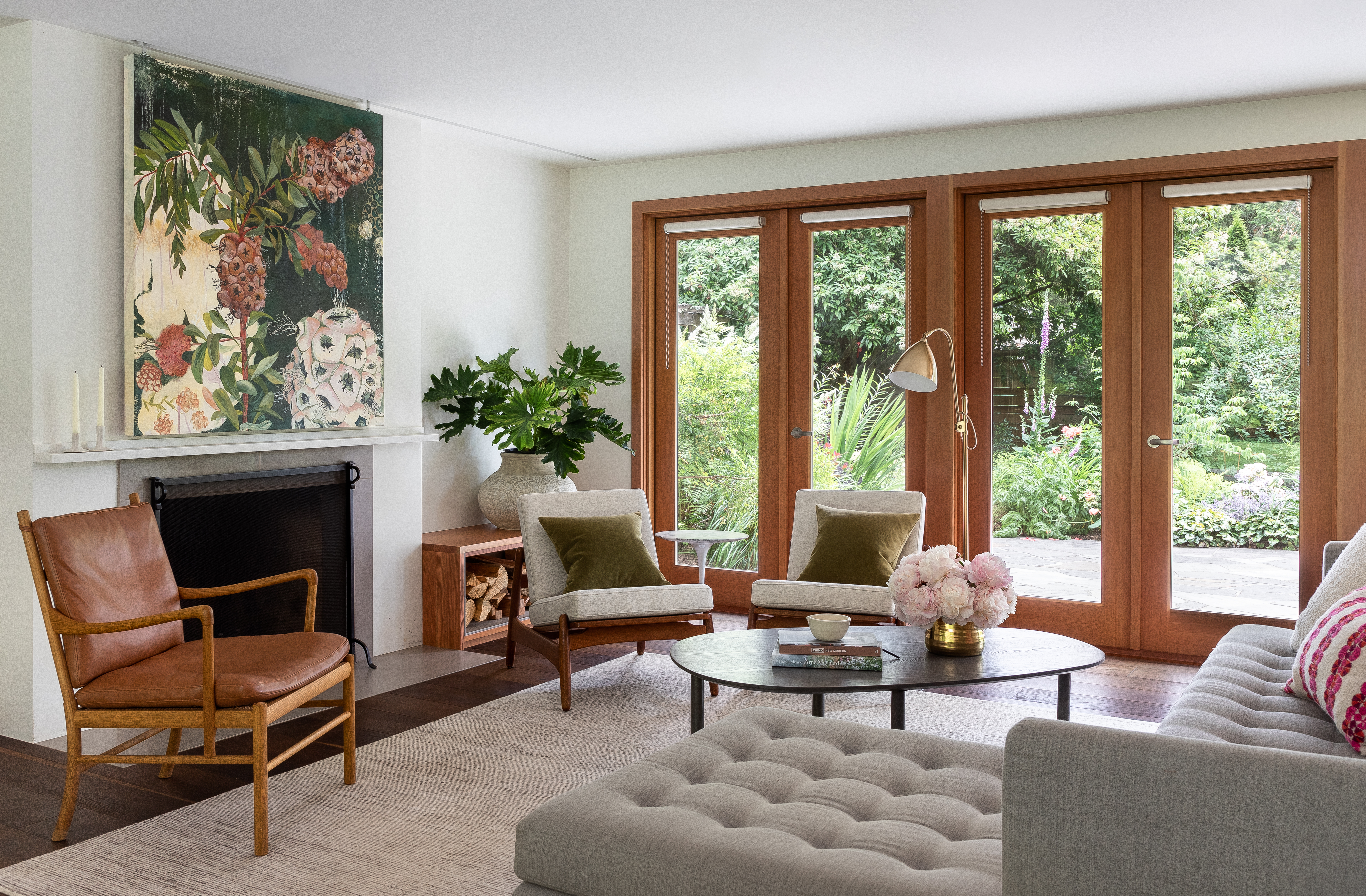 Coupard was tasked with creating three spaces for the home: a private family area, an entertaining area, and a guest area for extended family visits. And overall, he aimed to open up the home to the garden spaces. “The house had surprisingly little access to an already developed, nice garden,” says Coupard. He opened up the center of the home as the entertaining space, linking both this space and others to the gardens with windows and doors as a primary visual feature throughout the rooms.

Furnishing the new great room was a big focus for Beers in his design. “It serves as the family’s main hangout space, but also a major circulation space,” he says. The low ceilings and horizontal scale in the room made for a challenge, but Beers looked for furniture that was off the floor so the room would feel light and give plenty of visibility. The great room’s color story was pulled from the room’s finishes and the art. Beers chose the saddle leather Ole Wascher chairs to complement the Douglas fir doors, the gray sofa was chosen to match the fireplace surround, and the green and pink pillows tie into the painting, which slides to reveal a hidden television. When Coupard opened up the center of the home for the entertaining space and better garden views, he had to relocate the kitchen into a smaller space—a hard sell, but one that made the most sense. “The kitchen was moved off to the side into a smaller area, developed to both accentuate its intimacy and visual connection to the other public spaces,” says Coupard. Another challenge? Those low ceilings. But Coupard used the horizontal visuals to his advantage. “Instead of attempting to use visual means to create the illusion of greater height, we decided to accentuate the horizontal, the ground plane, and the garden,” he says. “Most of the openings in the house attempted to capture the foreground plane and create an indoor-outdoor connection.”

The kitchen ended up being the architect’s favorite part of the house. Why? “The contrast of its physical intimacy and big visual connection to the children’s garden,” he says. 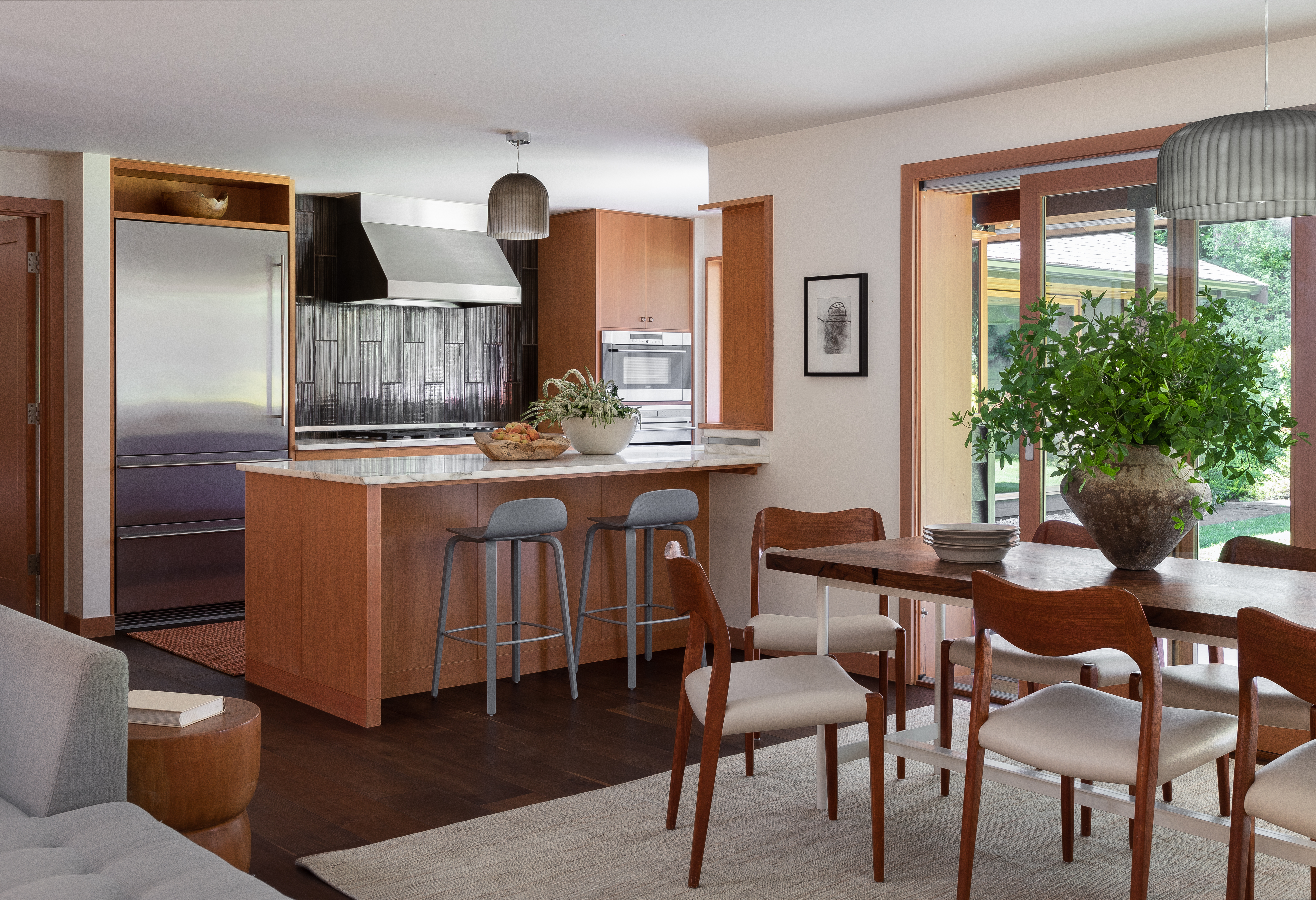 “The clients have great taste and were hands-on in the best possible ways—the dining tabletop was actually fabricated by the client out of walnut slabs that she selected in Oregon,” says Beers. “The homeowners were both game to try things outside their comfort zone, especially when it came to adding strong colors and textures to the house.”

Beers and his team helped the client commission a base from local Seattle furniture maker Chadhouse to pair with the tabletop, and found two different sets of vintage Moller chairs to go around it, but had them upholstered together to match. One of Beers’ favorite features in the home was the use of Douglas fir throughout. “We embraced the amber color of the wood early on, and the use of cool grays along with pinks and greens in the decoration help tie together the wood with the gardens outside,” he says. 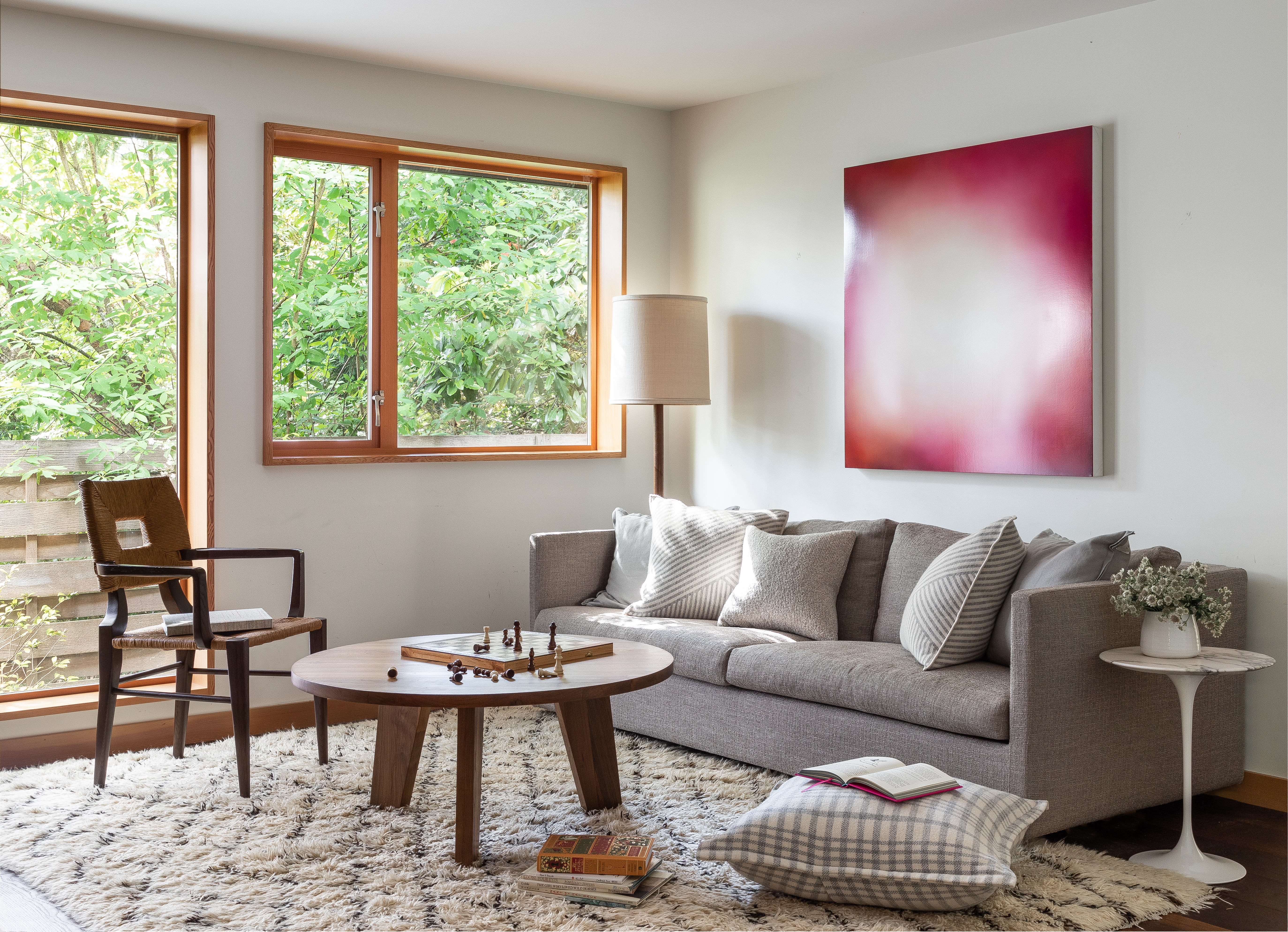 The private family area that Coupard was tasked to create is situated between the main suite and the children’s bedrooms. “This room is used for play and reading by the whole family,” says Beers. In the main suite, the bathroom is a thoughtful retreat that connects to the rest of the home. “A small bump-out allowed for the inclusion of a soaking tub under the picture window,” says Beers. “Consistency in materials reinforces this room’s relationship with the rest of the remodel.” 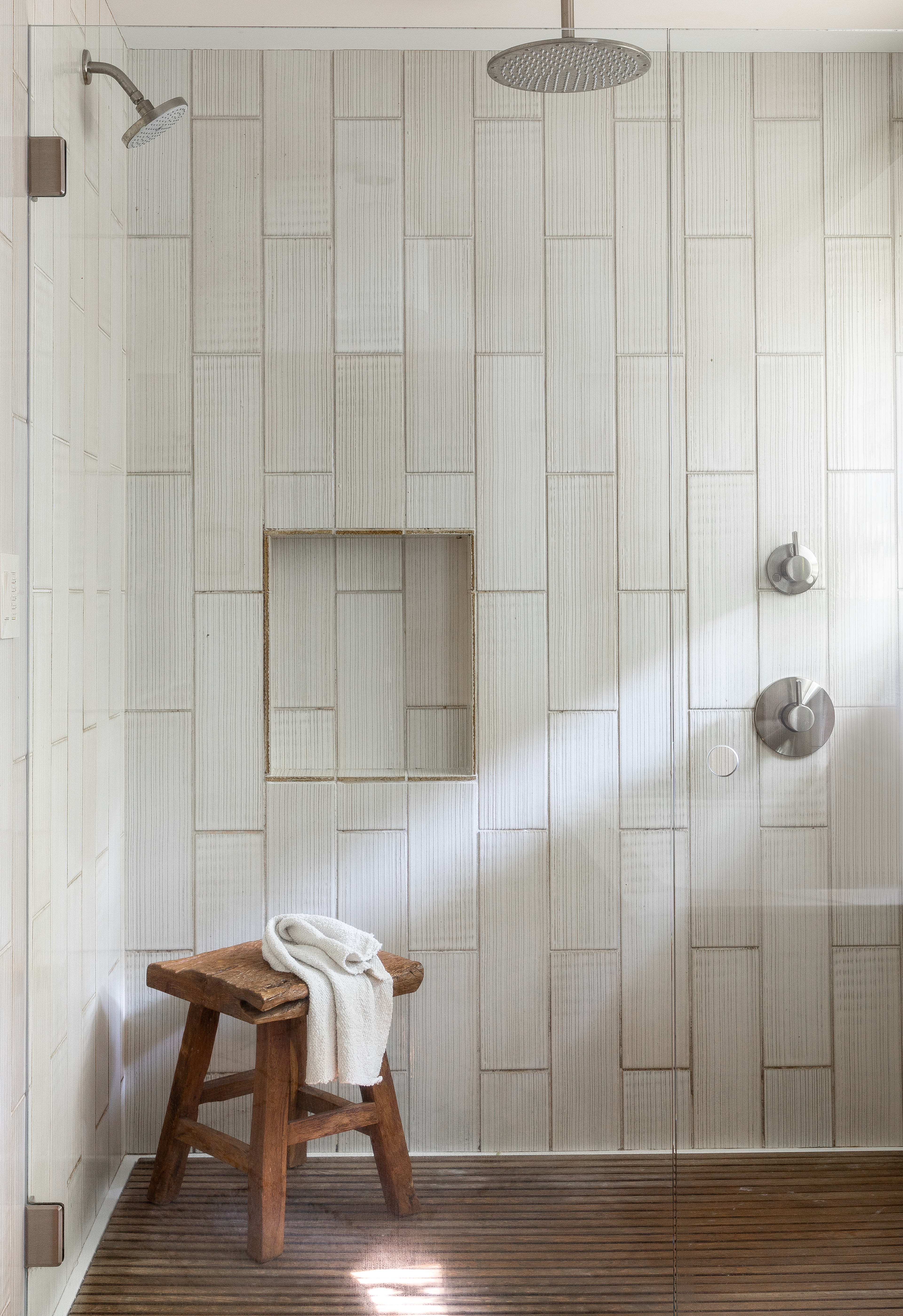 The minimalist shower still stays true to the organic color story of the entire home. “The [primary] bedroom where as an addition we finally had the opportunity for higher ceilings,” says Coupard. “In this room we are able to contrast a large, tall window that frames the base of a big cedar tree and wide window that opens out on axis to the long north garden and looks back to the main house.” 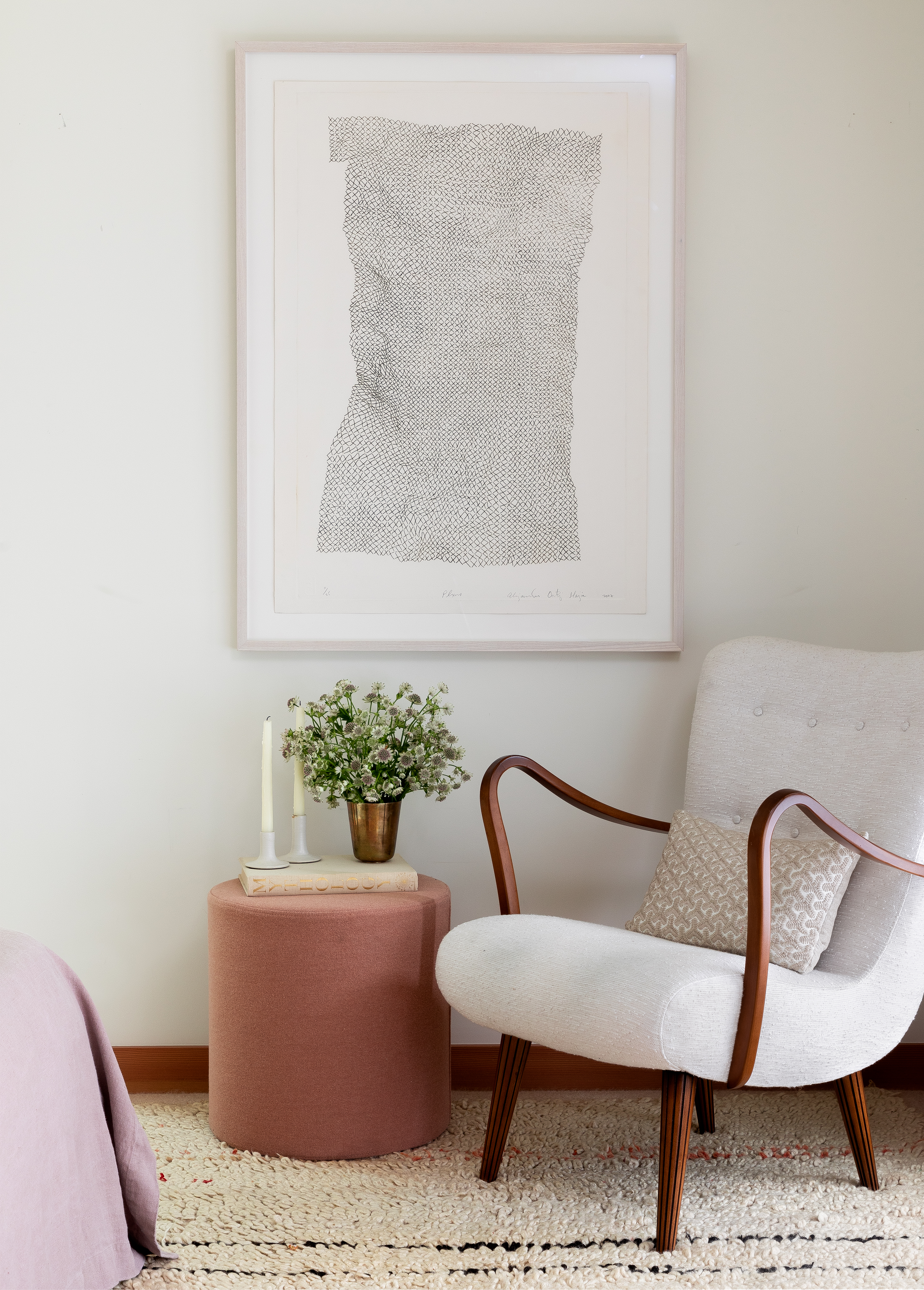 With such beautiful views in the bedroom, the colors in the bedroom were simple so not to distract. “Off-white, pale pink, and soft gray are punctuated with wood tones that recall the running trim,” says Beers

This Venice Home Takes Bold Neutrals to the Next Level

This Stunning Tucson Property Is the Epitome of Desert Cool

The Top 10 Home Trends to Watch This Year