This Stunning Tucson Property Is the Epitome of Desert Cool

Sara and Rich Combs are known for super-stylish Joshua Tree Airbnbs, and their Sonoran Desert location is just as much of a show-stopper. Sarah and Rich Combs first fell in love with the Mojave and Sonoran deserts during a road trip in 2013. While they chose the Mojave Desert as their new home two years later, they were excited to recommend Tucson to Rich’s parents when they recently expressed interest in retiring in Arizona. “As we searched for a place for Rich’s parents, in the back of our minds we were also thinking about the idea of opening up an inn bordering a national park,” says Sara. In their search they spotted a strange listing that seemed to be an empty canyon for sale, but it turns out there was a small hotel next to Saguaro National Park nestled into the canyon.  It was in deep disrepair after the recession cut its last renovation short, but the Combs’ still fell in love with the walled compound, its gracious shared living space, and the half dozen beehive fireplaces dotted throughout the guest rooms. They bought the property in October 2018, and the newly named Joshua Tree House Tucson opened its doors to the public in September 2019.

“The building had such great bones, which was part of why we fell in love so quickly,” says Sara. “The reclaimed telephone pole and Saguaro rib ceilings, beehive fireplaces, and a canyon pool unlike anything we had seen before.” The front door opens up to the main living room, which features a sunken conversation pit surrounding the main fireplace. Instead of a TV over the fire, Julia Kostreva’s western-inspired art hangs instead as a centerpiece for the room, while a projector and screen hang from the ceiling. Above the conversation pit is a custom bar by Fire on the Mesa with seating that doubles as a workspace for the Combs, with the kitchen just through the door. The Saguaro print over the console table was captured by local Tucson artist Emily Tartaglia. The main kitchen and dining space is designed to be shared with the entire property. Each suite has some kitchenette features, but the main shared space has everything a visitor could need. The dining room is a major eye catcher with Fireclay Tile floors and an art print by Heather Day. The table was made by Rich’s father, Jay Combs. Instead of open shelving in the kitchen, the Combs took the closet in the dining nook and turned it into an open “ceramics pantry” that made the HF Coors dinnerware and Ursula Basinger ceramic mugs easily available to guests. “[We] fell in love with the idea of an open pantry that could become a piece of art in its own right,” says Sara.

The Cholla room is just down the hall from the shared kitchen and dining areas. The single bedroom has, as many of the rooms do, its own beehive fireplace, desert views, and a Samsung Frame TV that shows desert artwork while it’s not in use. The Jonathan Adler side tables and the moroccan rug from Soukie Modern complete the earthy, modern vibe. The smaller upstairs terrace with panoramic views of the Sonoran Desert was transformed into an outdoor dining space, with an outdoor grill built into one of the columns and a large, long table and benches. This tablescape was set for the desert housewarming, with florals done by Bloom Maven. On the opposite side is the entrance to the rooftop patio, with views of the natural pool and fire pit along with Saguaro National Park. The patio has Serena & Lily lounge chairs to enjoy the sun, and directly connects to the Ocotillo suite. The two-level Ocotillo suite connects to the upstairs deck and the downstairs living room. While the suite has two beds, a beehive fireplace, and kitchenette, the suite’s wow factor comes from the mural above the second bedroom’s headboard, created by artist Linda Pappa. 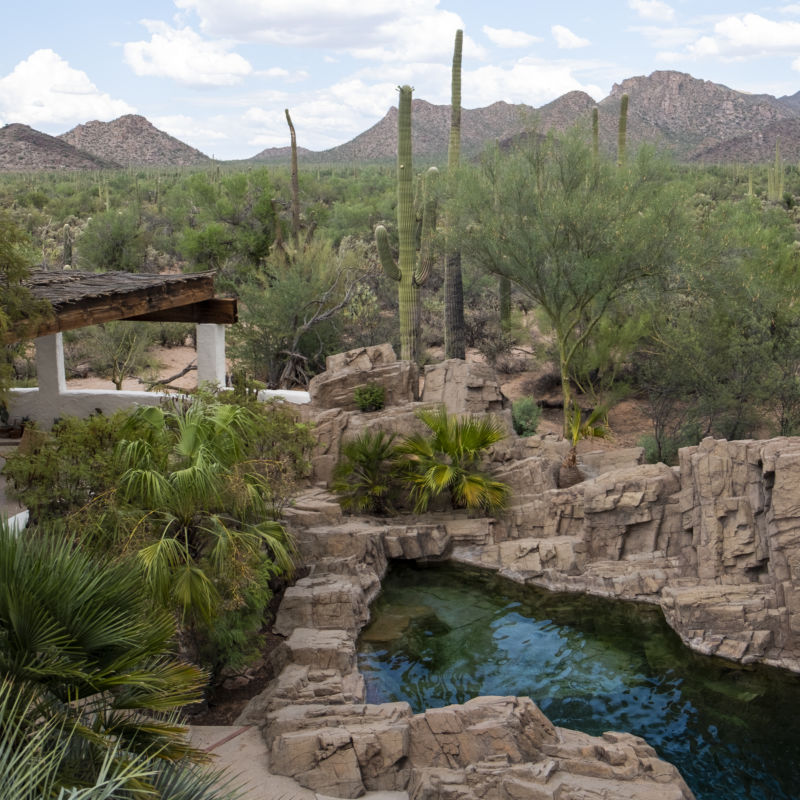 While the Cholla and Ocotillo suites connect to the main shared spaces, a short stroll through the backyard is required to find the remaining three suites. The backyard features a natural pool with a waterfall, and a firepit. The massive firepit is perfectly positioned to enjoy views of the neighboring Saguaro National Park, and the beautiful pool on the property. The Saguaro suite is another two-level suite, with the bedroom and bathroom on the bottom floor and the living space and kitchenette upstairs. The tall bed frame is a modern four-poster style, with a tapestry over it by Kuddkrig Home for a cozy feel. “From day one we knew this would be our favorite bathroom,” says Sara. The Saguaro suite’s sunken bath feels like it’s outside, thanks to hanging plants and potted ferns. The penny tiling and sunken bath style were already there, so the Combs just refreshed the walls with Moroccan waterproof plaster, updated the shower fixtures, and retiled the rest of the bathroom’s floor. The floating headboards throughout the JTH Tucson are made by L.A.-based Norwegian Wood. The cloth-covered style makes them easy to update if the room design changes over time. The Yucca suite features this mustard-toned headboard, complementing the other yellows in the room.

Primarily, the headboard in the Yucca suite nicely pairs with its yellow beehive fireplace. Just along the wall is a doorway to a private patio for the suite, which the Combs say sees a ton of wildlife. The Combs call the final part of the JTH, the Agave suite, their apartment-style room since it’s the only one that features a full kitchen. The one-bedroom suite, decked out in West Elm, has a living space with the kitchen, a cozy bedroom, and then a private balcony that has an outdoor dining table and lounge chairs.

This outdoor staircase leads from the deck that connects the Saguaro and Agave suites to the front yard, directly into the small olive grove next to the entry path to the JTH.

Tucson Just Became Our Favorite Weekend Getaway Ever. Here’s Why.

How to Assemble a Saguaro Bûche de Noël

This Southwestern Road Trip Is Filled with Hidden Gems