These Edible Herbs Not Only Taste Awesome—They Keep Weeds Away 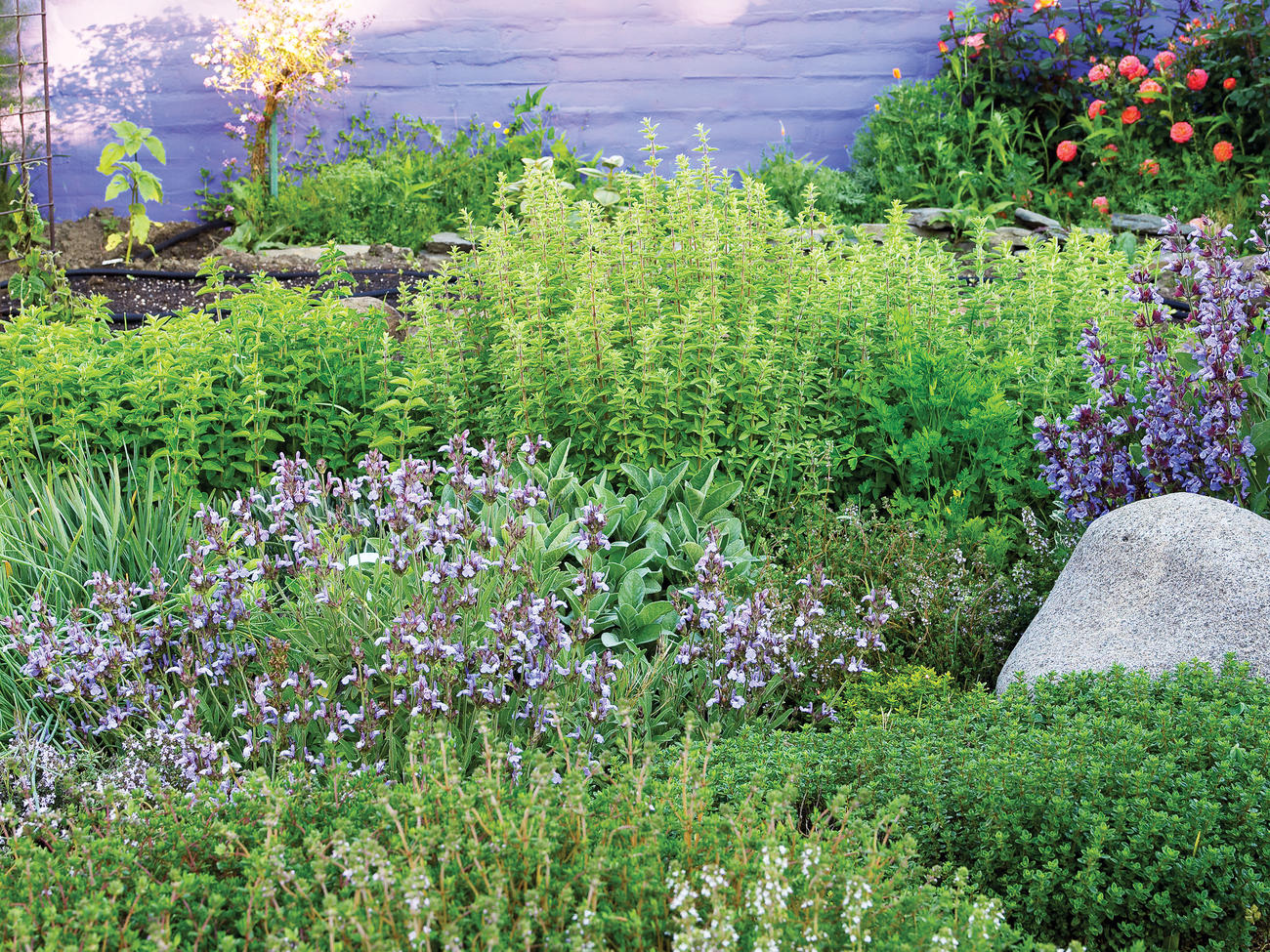 If you hate pulling weeds in your garden, remember: Herbs taste good, while most weeds do not, so why not grow herbs to outcompete the weeds? Fresh herbs are a necessity in the kitchen. They enliven cocktails with ease, they elevate the most basic store-bought pasta sauce, and they put you just one step away from salsa verde, chimichurri, and gremolata. Their blossoms are also delicious and make every dish more beautiful (we eat with our eyes first!).

A little science for you: It doesn’t take a degree in plant ecology to understand that plants need room to grow; how well they do that is known as “competition.” Many of the plants that we consider weeds, known as “R-selected” in nerdier circles, have a competitive advantage because they’re fast-growing and have high fecundity (they produce a ton of seed). Many can reproduce vegetatively by sprouting roots right out of their stems, and some plants employ chemical warfare to prevent other plants from growing nearby. This phenomenon, first reported 400 years ago, is called allelopathy, and it’s frequently seen in the same plant families from which we derive our favorite herbs. The strong aromas of fennel, caraway seed, and wild garlic come from chemicals that can also keep weeds at bay. Lots of edible herbs keep weeds away by employing some combination of these weedy characteristics.

When choosing plants for your plotted garden takeover, look for three words: “self-sows freely.” These herbs prevent weeds from growing in your garden, to get you on your way to total weed domination.

Mint (Mentha spp.) reproduces quickly through its runners, and its stems root easily. Use this to your advantage by sticking a few sprigs in a glass of water until they root, and then plant them in a spot that you’d like to fill in. Since mint is shade tolerant, I keep mine in a corner under some currant bushes, and it stays fairly well confined by hardscaping (although I have seen it sprouting from underneath brickwork, it’s pretty easy to yank). Since it gets up to a foot or two tall, it can keep shorter weeds like creeping woodsorrel (Oxalis corniculata) under control. You can chop it all back in the winter and it’ll sprout right back up in the spring. I grow both peppermint and chocolate mint in my garden, and dandelions can barely get a leaf in edgewise.

Lemon balm (Melissa officinalis) is another weedy mint-family herb that will enthusiastically spread through the shady spots in your garden, and its tiny pale yellow flowers are loved by bees. It’s a pleasant addition to herbal tea and mojitos, or to a loose pesto to spoon onto pea soup or grilled fish. It grows easily from seed, or you if you see any growing in your neighborhood, chances are your neighbor will happily give you a sprig to sprout yourself.

Oregano (Origanum vulgare) is the second most plentiful herb in my Portland, Oregon, garden. It’s growing out of the pavement along my house’s foundation, along my fences, and pretty much anywhere that I don’t actively manage it, taking up space that would otherwise be occupied by weeds. Mine is Greek oregano, so it’s tall and sturdy, and has fine hairs on the leaves and stems. Like a weed, this herb drops tons of seed and grows runners, so it will quickly colonize any sunny spot that needs help. It’s drought-tolerant and can take to a rocky soil with ease, and is a standard ingredient in Mediterranean cuisine.

Perilla (Perilla frutescens), also known as Korean sesame plant or shiso (P. frutescens var. crispa), isn’t seen a lot in Western kitchens, but it’s used a ton in Korean cooking (it’s also that heart-shaped leaf that separates the fish from the wasabi and ginger on your sushi plate). This herb has a strong, almost savory-minty aroma and produces tall spikes of flowers that butterflies find irresistible. Since it can become a bit of a weed itself, it prevents less-useful plants from becoming established. I like to add it to cold noodle salads and Vietnamese soups. This one can be a little harder to source, but you can sometimes find little starts at Korean grocery stores, or buy seeds online— you’ll only have to purchase them once.

Parsley (Petroselinum crispum) is a kitchen staple, and after you see how easy it is to grow, it’ll become a staple of your garden, too. Once you get this herb well established, count on it dropping seed all over the place after it bolts in early summer, forming thick carpets impenetrable to weeds. I even see it sprouting in the cracks of the paved walkways along my vegetable garden. It prefers a sunny spot but can handle a little shade. There’s an old proverb that says parsley seeds have to go nine times to the Devil before they’ll sprout, but I’ve found that it really just takes warm, moist soil and a little patience (it can take a couple weeks for seeds to germinate). It’ll take a little babying to keep parsley going (mostly just a drink of water once a week or so), but once it’s got a few leaves, you’re on tabouleh street.

You’ll have to specifically buy bulb fennel if you want to harvest this plant as a vegetable, but regular fennel (Foeniculum vulgare) is an outstanding aromatic plant on its own. It grows to about 5-6′ tall in a sunny spot, preferring well-drained soils. It’s not terribly fussy; I often see it growing straight out of gravel along railroad tracks. The large heads of yellow flowers attract droves of bees and butterflies, and you can collect the pollen to use as a spice. The leaves have a pleasant licorice flavor and the fragrant seeds are also loved by birds. Within a year of planting it, count on it filling in large swaths of your garden; if you don’t want it to go totally nuts, just deadhead the inflorescences before they drop their seed. Chemical compounds in fennel prevent the seeds of some weedy grasses from germinating.

A lot of other plants in the carrot family, like caraway, dill, and chervil tend to prefer cooler weather, which makes sense when you think about how common they are Northern and Eastern European cuisine. These bolt quickly in heat, so get your first plants established by seeding in late summer or early fall. Caraway and dill seed from the spice jar works great, as long as it’s relatively fresh.

One of the best things I’ve ever planted in my garden is garlic chives (Allium tuberosum). They grow in clumps up to about a foot tall (their blooms come up another foot or so in height), with long, flat leaves that taste like a cross between garlic and scallions. Their white flowers add a beautifully subtle garlic flavor as a garnish on soups and salads. The edible herb keeps weeds away by growing fast, happily seeding itself around the weedy edges of my garden beds. Like regular garden chives (A. schoenoprasum; another fast-spreading herb), garlic chives are prized for their leaves rather than their bulbs. Also known as Chinese leek, they’re most often used in East and South Asian cooking (I add them to savory pancakes).

A favorite of Sir Francis Bacon, salad burnet (Sanguisorba minor) is a splendid perennial pot herb. It’s such an easygoing one; hardy to Sunset climate zone 4, getting by just fine on crummy soils and infrequent watering, and weeds can’t handle its density. In my garden, it is literally growing out of cracks in my driveway. It tastes like cucumber, and is an essential ingredient in the cult favorite green sauce from Hesse, Germany, known as Grüne Soße.

This less common (though edible) herb keeps weeds away from shady spots in your yard. With its low habit, lime-green leaves and dark red veins, blood sorrel (Rumex sanguineus) is perfect for filling in dark, damp spots in your garden where chickweed and morning glory tend to set up shop. Its flowers are pretty inconspicuous, but its interesting foliage makes it a solid choice for a shade garden. It has a slightly citrusy, tart flavor that makes it pleasant in salads and on sandwiches. Look for starts in the herb or vegetable section of nurseries, or buy seeds to sow in the spring.

We may not use borage (Borago officinalis) as often as say, the English, but with its nodding, cobalt blue blossoms and broad, bristly leaves, it makes a dandy addition to the garden in any zone. Bees go absolutely gaga for it, and it does well both in shade and in the sun. This old-fashioned edible herb keeps weeds away by growing quite large—1-3′ high and about as wide—so give it room and it’ll effectively suppress undesirable weeds by shading them out. Like salad burnet, it has a pleasantly fresh cucumber flavor; along with mint, borage flowers are the traditional garnish for a Pimm’s cup.