Create Your Own Pondside Retreat 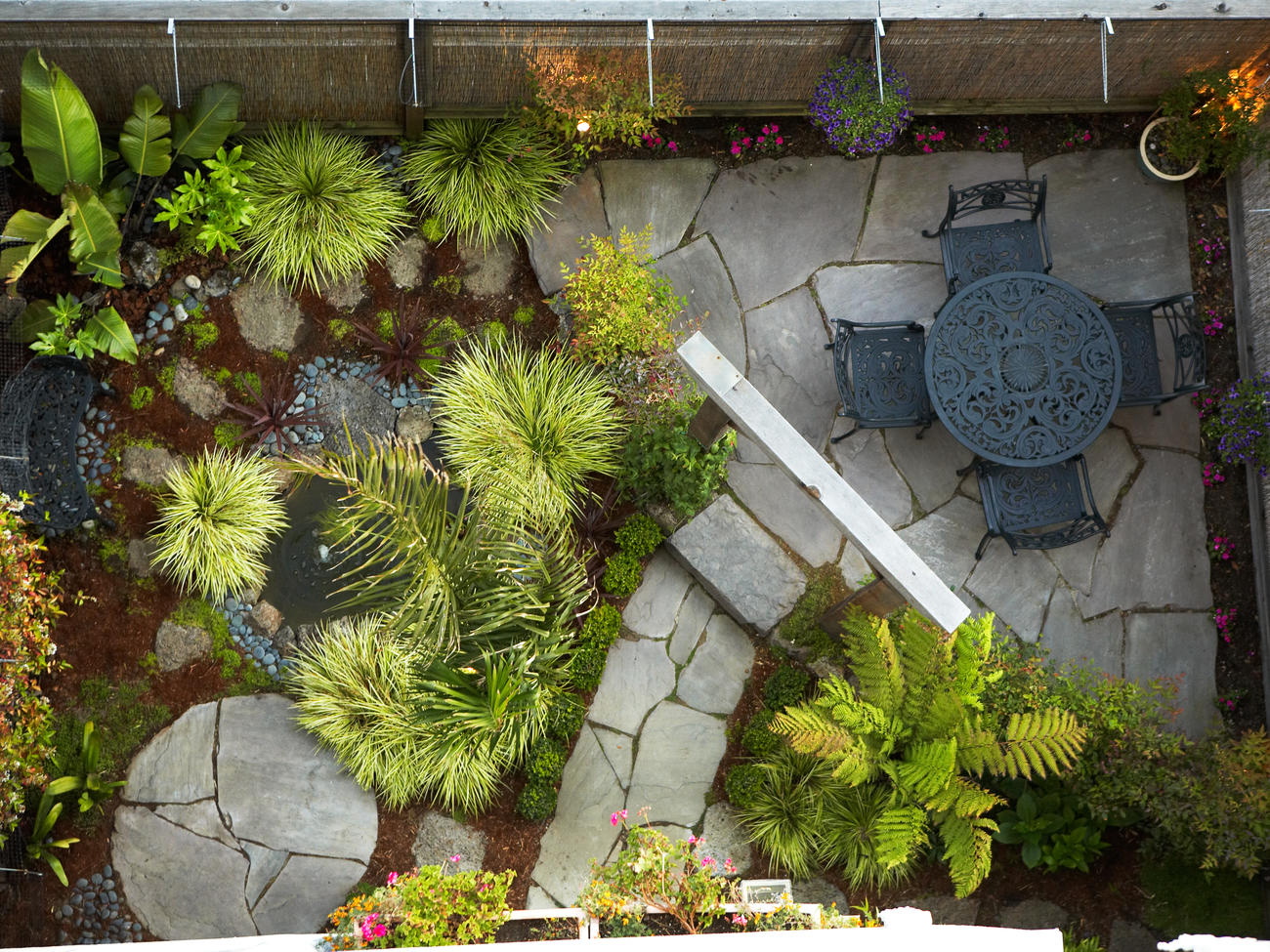 Finding room for outdoor living is not always easy in a compact backyard. And the task is even more challenging when you’re also trying to maintain privacy and create serenity in a bustling urban area. Still, landscape designer Terry Mulrooney managed to do it all in Don and Dianne Van Siclen’s San Francisco garden.

Although the couple’s lot measures just 17 by 20 feet, Mulrooney established a feeling of expansiveness by creating distinct living areas in two corners of the garden and planting the other two corners, then linking all areas with paths.

Dry-laid flagstones, tightly spaced, cover the upper patio as well as the main walkway leading to it, while an arc-shaped path of natural steppingstones connects the upper patio to a smaller one that is nearer the house and overlooks a pond.

Plants chosen for their varying foliage color, shape, and size―including Acorus, dwarf English boxwood, and nandina―repeat throughout the garden, providing a sense of continuity. Yet they contrast with one another just enough to give the impression of a great variety.

Mulrooney calls the design a “jungle-scape.” His intention, he explains, “was to make something that looks and feels natural, to counter the manmade urban environment beyond the back fence.”

A burbling fountain, surrounded by lush foliage, masks the sound of city noise. The garden “really is a retreat,” says Dianne Van Siclen. “When you’re out here you don’t feel like you’re in a tiny space.”

How to Expand a Small Garden

Vary elevations
A garden that contains changes in level appears larger than one that’s flat. In the Van Siclens’ garden, the main patio is raised a step above the rest of the garden. The distinction makes you feel like you’ve entered a significantly different space, according to Mulrooney.

Emphasize transitions
A post-and-beam portal marks the threshold between the main path and upper patio. Mulrooney wanted this structure to be substantial and weighty, yet simple and in scale with the space.

Use sheer fencing materials
Translucent reed fencing has a see-through quality that provides privacy while allowing some light in, creating a more expansive feel.

VIEW FROM THE TOP

Terraced living spaces make the most of a sloped city lot

Even a hilly San Francisco backyard can provide a landscape for outdoor living. Bill and Linda Kingsbury’s compact urban garden rises upward from the house, yet has patios on several levels to take advantage of the entire space.

Because of its incline, the couple’s backyard was underused for years. So the Kingsburys worked with landscape designer Jean-Paul Bergez to transform the garden into a serene, naturalistic setting with multiple outdoor living areas.

Bergez took design cues from the existing topography as much as possible. “Part of a successful design is to draw people out into the space,” he says.

Because the highest level had the largest flat area and offered a view of San Francisco Bay, Bergez designated that as the primary patio, creating a smaller seating area farther downslope and adding a deck at the yard’s base.

Fond childhood memories of fishing with her father inspired Linda’s wish for fish, trickling water, and a placid pond.

Bergez built a large pond into the top level, linking it to two lower ponds with a series of streams and waterfalls. Textural plants―including grasses, phormium, and bamboo―keep the garden looking good year-round. And since the home sits below the highest part of the property, Bergez incorporated low-growing, wispy plants over most of the slope so the back of the property is visible from the lowest point. “This makes the garden feel more expansive,” he says. Larger accent plants cluster around the perimeter.

The water feature attracts wildlife, including doves and hummingbirds. But Linda especially loves the fish and the stream. “We can see the lowest waterfall from the kitchen, and it’s something I look at every single day,” she says.

3 great ideas from this garden

1. Make the most of elevation changes. Read the slope and use existing level areas. Bergez flattened as little of the landscape as possible, taking advantage of the slope to create streams.

2. Choose every element carefully. “In a small space, every imperfection is magnified,” Bergez explains. “The success of a small space is truly in the details.”

3. Brighten the landscape with plants. As the sun moves across the sky, different parts of the garden are shaded by trees and surrounding buildings. So Bergez used white, pink, and yellow blooms to show up better in the passing shadows.

COURTYARD ON A SLANT

Diagonal lines make the most of a space-challenged garden

Small spaces work best when they multitask. Jennifer Johnson and John Rippel’s enclosed garden in Santa Fe is a prime example. With three glass doors and several windows looking out on the courtyard, they wanted to have attractive views from indoors. And since it’s their primary outdoor-living space, they needed at least one entertainment area―and preferably a second, more intimate one. That’s asking a lot from 693 square feet.

Garden design and installation partners Monika Hellwegen and Azul Cobb sketched out several plans but weren’t satisfied until they came up with the notion of placing everything on the diagonal.

They installed a triangular patio for outdoor dining immediately off the kitchen and another smaller triangle to use as a private retreat and campfire gathering spot at the opposite corner of the garden. The first enjoys sun most of the day; the second is usually shaded. Different materials for each―golden quartzite for the sunny patio and tumbled Pennsylvania blue flagstone for the shaded retreat―emphasize the difference. An island of plants in a diamond shape, with the outline defined in stone, separates the two areas.

A two-sided fountain tucked up against the back wall adds another triangle to the design while allowing both patios to enjoy the sight and sound of trickling water.

Johnson, an artist, loves the garden’s pattern. “Looking out at it is a pleasure,” she says. The fountain is another joy for her. “Because the sound of falling water travels in two directions, you can hear it from most rooms indoors.” When the weather is warm, however, Johnson and Rippel are usually in the space: “It’s like having another room.”

3 great ideas from this garden

1. Use water sparingly. A splashy fountain isn’t just wasteful, it’s noisy, especially in a small, confined space, Cobb says. Allowing only a trickle of water to run from the spout―and breaking its fall with a chain and a splash stone set above water level―provides the right amount of sound.

2. Use stone generously. Other materials may be trendier and cheaper, but stone is timeless. “Its organic quality is soothing and comforting in a garden,” Hellwegen says.

3. Capitalize on your yard’s exposure. The designers were able to use hostas, Japanese maple, ‘Palace Purple’ heuchera, and other plants that don’t normally like Santa Fe’s intense light, because the courtyard faces northeast. The cool plant palette contributes to the garden’s serene mood.

More: Fresh Dirt, get the latest tips, tricks, and planting ideas on our garden blog »

Create Your Own Pondside Retreat