Sip-Worthy Soup Recipes to Keep You Warm All Winter Long

Warm up with a comforting bowlful of our tastiest recipes. 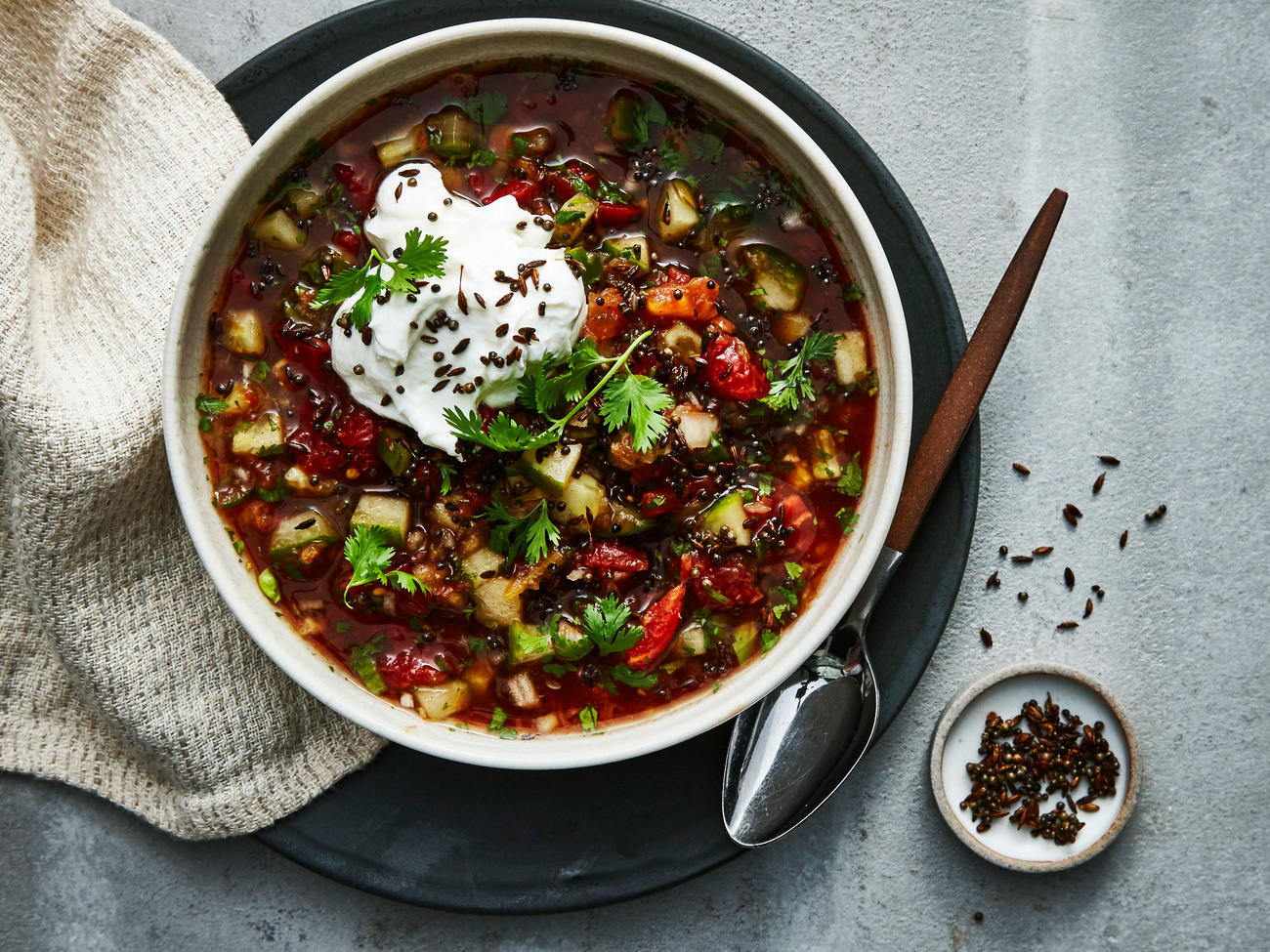 When the weather goes low, we go warm by making big batches of soups and stews to bring comfort to our stomachs and dinner tables. Maybe, as the sun seems to set later and later, it doesn’t feel like winter where you reside and you’re just craving a big bowl of tomato soup or a slow-braised stew—there’s nothing wrong with that! We’ve got the recipes to satisfy any and all soup cravings.

One of the best things about making soup is its ability to make more than just one dinner or dish. When I make a pot of chili, I first eat it topped with cheddar cheese and green onions. The next day I spoon it over buttered elbow pasta with cheese for an easy chili mac. On the third day, I smother a sausage in a bun with the final bits of chili for a delicious chili dog; that’s three days’ worth of dinners from one pot of quick chili.

If you’re whipping up a batch of lentil soup, try serving it over brown rice with avocado and cherry tomatoes for an easy lunch bowl the following day. Soups also make a great meal-prep option for those heading into the office or on a midweek picnic because there’s no better time than the present to invest in a nice thermos that will keep a homemade chicken soup warm all day.

So as you start to explore soups and stews this season, keep this list of our favorite soup recipes nearby to find a worthy, warm, and easy to serve option for any meal of the day.

This classic chicken and coconut soup gets its rich and dynamic flavor from quintessential Thai ingredients: coconut milk, lemongrass, fresh ginger, lime juice, fish sauce, chile paste, basil, and cilantro. While warming and thoroughly comforting, this dish comes together incredibly quickly. Of course, it’s even better the next day after the flavors have had time to rest and fully meld within the thick and satisfying, savory-sweet broth. Just saying–doubling this recipe to guarantee leftovers wouldn’t be a terrible idea.

This soup is called “Sidekick” for two reasons: One, it’s a grilled cheese sandwich’s best friend, and two, it’s a favorite at Sidekick Cafe–Cowgirl Creamery’s lunch counter in San Francisco’s Ferry Building. (The soup is also served at The Cowgirl Cantina in Point Reyes Station, California, and at the Cowgirl shop in Washington, D.C.)

The success of this soup depends on really good canned tomatoes and long, slow simmering so that all the flavors meld and mingle. The recipe is adapted from one in Cowgirl Creamery Cooks (Chronicle Books).

We left the soup chunky with a clear broth, but you could easily purée it to create a smooth soup. Just don’t skip the avocado mixture, as it makes a refreshing contrast to the beans and spice.

We made our matzo balls small, for easier eating, but if you prefer 1 large ball per serving, divide the dough into 4 to 6 balls and boil them 10 minutes longer.

Time: 40 minutes. A popular Japanese winter dish, warm soba with toppings is just the thing for lunch on an overcast day. The broth is made with dashi, a staple soup base whose delicate flavor comes from dried bonito tuna flakes and seaweed.

When you’re at the farmers’ market, look for Red Russian kale, an heirloom variety that, despite the name, is purple and gray-green. Its tender texture and mild flavor go well in this lightly spicy soup.

A far cry from the storebought packages, real ramen starts with amazing broth. Chef Kolin Vazzoler of the late, lamented Shimo Modern Steak, in Healdsburg, California, simmers his for 12 hours. Then he ladles it over noodles and adds toppings like brined pork belly. Our simplified version (but still over the top, taste-wise) can be made in a long afternoon–or started the day before.

This soup has two layers of kumquats–cooked in the soup to become mellow and tender, and finely chopped with parsley for a bright topping.

Miso Soup with Tofu and Nori

Classic. Simple. Comforting. Nothing beats a good bowl of miso soup, and this recipe is sure to become one of your go-tos on rainy days. We used edamame and tofu, but you could substitute cooked meat and most any vegetable you have on hand.

Get the most out of great fresh carrots by making pesto out of their tops.

This pretty soup takes on an added delicacy if you use ravioli made with thinly rolled pasta, but it’s good with the sturdier type too. Prep and Cook Time: about 25 minutes. Notes: Cooking time depends on the brand of ravioli you use; some take longer to cook than others.

Some of corn’s best partners–medium-hot chiles, chorizo, and basil–join up in this simple dish. It’s substantial enough to call a chowder, but light enough for summer.

This lovely soup is practically spring in a bowl. To make it heartier, scatter quartered cherry tomatoes and croutons on top. Snap peas often have a fibrous string that runs down the pod’s straight side; to remove it, snap off the stem end and pull down sharply.

One large dumpling per diner tastes just as good as many smaller ones, but it’s faster to make and looks more dramatic.

“When I serve this soup to my 7-year-old,” says Sunset reader Cristina Gonzalez, now of Fredericksburg, VA, “we talk about how his Mexican abuelito [grandfather] and I ate it growing up in L.A., and how he’s eating it now.” She changed out the original beef for turkey. The flavors are very gentle, making this a great family dish.

We like the robust flavor of red Swiss chard in this soup recipe from Sunset reader Juliet Grossman, of Temecula, California. You could also make it with green Swiss chard, which is milder, or spinach.

With its lively dance of flavors, this soup is a spring tonic.

This super-easy soup is especially good with fresh peas from the garden or farmers’ market, but you can also use pre-shelled ones from the store. For a lusciously creamy texture, purée the soup for several minutes.

Notes: Use either soft, cold-smoked salmon (also called lox or Nova-style) or firmer, hot-smoked salmon (also called kippered), or offer both for an interesting mix. If preparing chowder through step 7 up to 1 day ahead, cool, cover, and chill; chill salmon, chives, and fennel sprigs separately. Reheat chowder, covered, over medium to medium-high heat, stirring often.

The variety of the vegetables, two kinds of legumes, and the Italian trick of cooking a bit of parmesan rind in the soup for added flavor create a palate-pleasing minestrone miles beyond the bland bean-and-pasta version so often served. The soup is flexible too; add your favorite vegetables or use whatever is bountiful in your garden this harvest. This soup keeps frozen for up to 3 months.

After one of her favorite restaurants refused to divulge the recipe for its velvety butternut squash and apple soup, Brie Tennis came pretty close with her own version.

18 Stews & Chilis to Warm You up This Winter

How to Master the Hot Toddy at Home

21 Recipes You Should Be Cooking This December