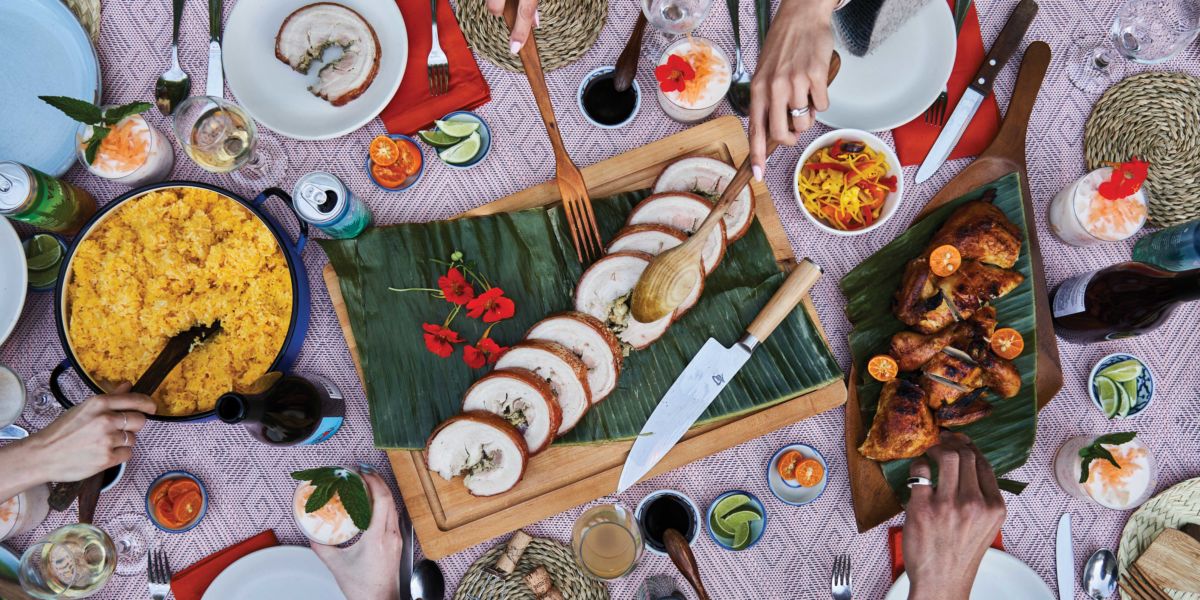 It’s three days before the one-year anniversary of the California stay-at-home order, and Nico de Leon and Chase Valencia are, for the first time in a very long time, starting, just maybe, to relax. It’s a breezy afternoon, rain clouds blowing by, palm fronds whispering overhead. “It’s almost tropical,” someone says. “This totally could be Manila,” says Nico as he fans oak logs smoldering under a glistening pork belly rotating on a rotisserie, the fat rendering from its crackling skin. It’s not the usual whole roasted pig lechon you see at Filipino parties and backyard barbecues throughout the West, but a pork belly slab stuffed with stalks of lemongrass and ginger and other aromatics, guaranteeing the perfect ratio of crispy skin, unctuous fat, meat, and flavor in every bite.

Mesquite charcoal sparks under annatto-hued chicken on the grill. Ice settles in a big galvanized tub in which bottles of natural wine, canned cocktails, and the Filipino standard-issue beer San Miguel chill down. It’s the first party Nico and Chase have thrown in a year and boy do they deserve it.

Chase and Nico are the proprietors of Lasita in downtown L.A. The restaurant is the evolution of four-year-old Lasa, which sadly closed due to the pandemic last year. Instead of sit-down dining, the smaller, outdoor-only Lasita has a take-out window; instead of an evolving menu of Filipino classics and innovations, it’s a tightly edited menu of Filipino basics spun just so. “It’s a Filipino rotisserie and natural wine bar in Chinatown,” says Chase. “You can’t get any more L.A. than that.”

Yes, there’s garlic rice, a gauntlet thrown down in front of fast-food chain Jollibee, but also chicken fat rice, flavored with lemongrass and garlic and stained turmeric yellow. Roast chicken sold in wholes and halves. Quick-pickled vegetables to reset the palate. Smashed cucumber salad draped with coconut green goddess dressing. There’s also raw wine sold by the bottle, and it turns out the low-intervention, funky, tangy, and sometimes fizzy wines go exceptionally well with the rich and bright spectrum of flavors on the menu.

And in the backyard today that stellar food and the wine is the star. Instead of pushing it through the take-out window, they’re settling into Monday night (the standard chef’s day off) and have gathered their friends and staff for a cookout to celebrate what’s so far been a successful restaurant opening. The staff have gotten the vaccine and are onto their second shots. You could say they’ve also got a second shot at restaurant success, thanks in large part to the lechon, and mostly to the spectacular chicken.

To put this dish in context, it must be pointed out that roast chicken, rotisserie and otherwise, is a capital-T Thing in L.A.: There’s the Japanese-Peruvian Pollo alla Brasa, roasted over cords of wood and beloved by Nancy Silverton and residents of K Town, served with a zippy green sauce of serranos cut with lettuce, the better to stretch the sauce and barely tame the heat; the za’atar-spiked bird at Kismet; and Zankou’s version served with whipped garlic sauce that adds heat and lusciousness and garlicky bite. One and all they’re beloved for their succulent meat, skin charred just so, and complex flavors that inspire bite after bite. The chicken inasal at Lasita is all of those things and more: lemongrass-imbued, annatto-stained, caramelized, and altogether glorious.

So today, Nico brushes the chicken as it sits just to the left of the coals, the heat of the mesquite setting the glaze. The chicken has been marinated in brine spiked with the calamansi juice, ginger, lemongrass, garlic, and bay leaves before being spatchcocked and splayed flat to better take the heat. Chase’s wife Steff cues up the soundtrack of reggaeton and hip-hop. “This is my day-drinking playlist,” she says. Chase uncorks another bottle of funky fizzy natural wine. Guests huddle under the tree as a sun shower blows through, giving way to blue sky. They settle at the table, hoist their fizzy wines to the sky, and toast to Lasita.

“Just the right amount of salt and sweet and bright and savory. Plan ahead to let the chicken marinate fully overnight to absorb the flavors. Brushing the chicken with the aromatic butter baste gives the chicken even more flavor and the most beautiful color.”

“This recipe of chicken fat rice utilizes the bits of excess fat and skin used when preparing the meat for the marinade,” says Nico. “To collect the rendered chicken fat (a.k.a. schmaltz), place the trimmed fat from the spatchcocked chicken in a small saucepan cold, then place over low heat. The fat will begin to render, and the skin will begin to turn yellowish and wrinkly. You’ll know you’re spot-on when the skin begins to brown. EAT THOSE BROWN BITS!!! Then set aside the rendered chicken fat.”

“This side dish is the best compliment to these rich and tasty proteins, especially in the summer after standing over a hot grill under the strong L.A. sun. This dish is a fun play on something familiar, but we made it Pinoy,” says chef de Leon.

“When sourcing your pork belly, look for whole boneless slabs with the skin on,” says Nico. “Most Asian groceries will sell this, but you need to let them know you want the WHOLE SLAB with the SKIN ON. Some other markets and specialty butcher shops can help source it as well. And recently many wholesale meat purveyors have been offering their services to the public. Look for a good meat-to-fat ratio and an even width throughout for the best results.”

“This childhood favorite is a really easy yet a very impactful way to highlight a sweet summer staple,” says Nico. “Simply called Melón, it’s just a mixture of cantaloupe, crushed ice, sugar, and, depending on your personal preference, milk or water. My family grew up having it with milk, so it’s my personal preference, plus the sweetness of the milk gives me cereal milk vibes, which is always nice.”

How to Throw a Filipino Dinner Party