The Hunt for the Best Burrito

Food writer Jan Newberry travels all over California in search of the very best burrito. Plus, secret recipes and readers’ favorites from around the West 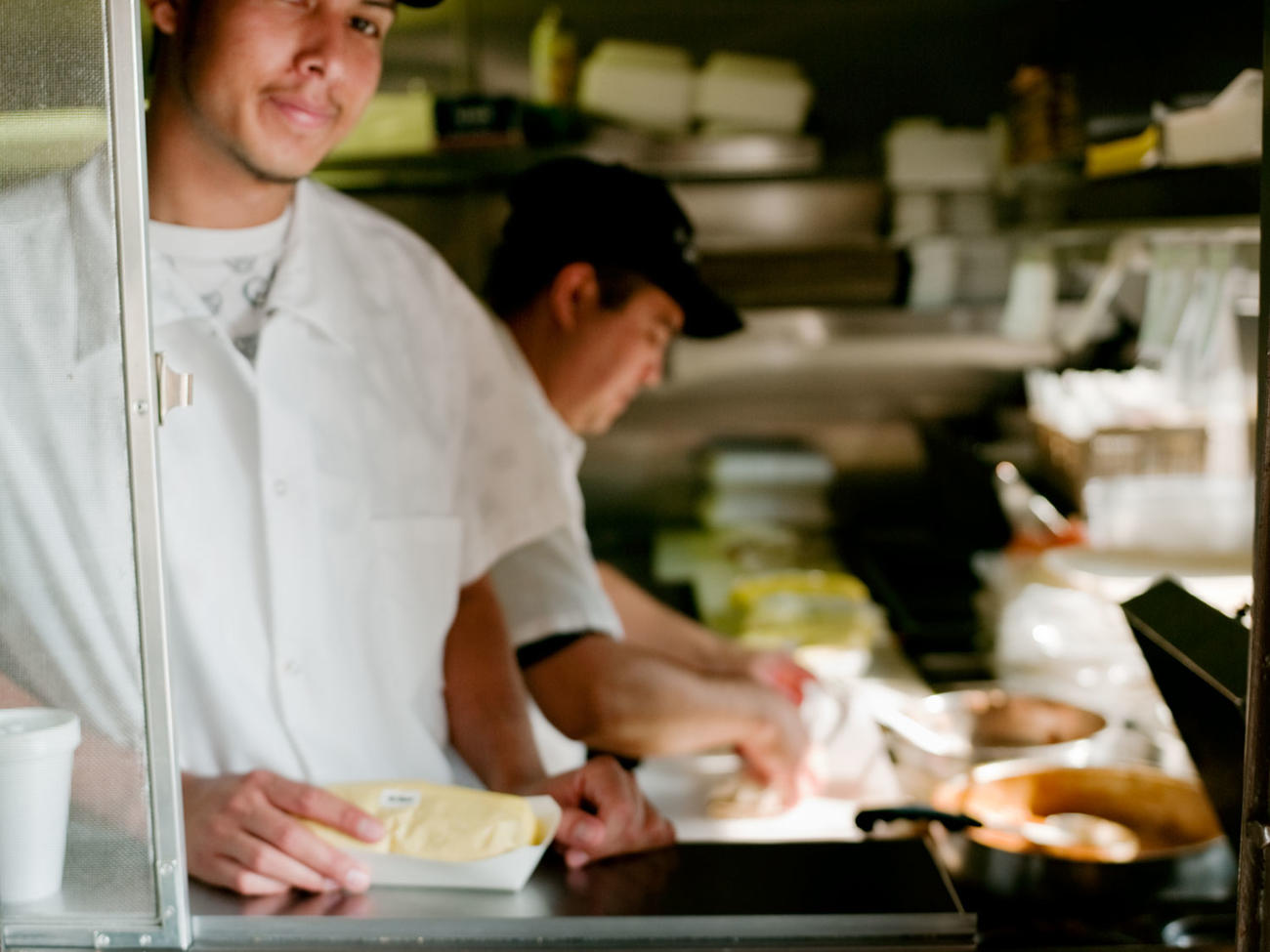 North versus South: Who makes the better burrito in California? Jan Newberry eats up—and weighs in.

Burritos, like barbecue, are a fiercely defended culinary icon—defined not by what they’re made of, but by where they’re made. In the North, a burrito is a foil-wrapped behemoth: a tortilla the size of a manhole cover bursting with rice, black beans, meat, and an unending list of ingredients that would empty the shelves of most Latino markets. Buried in a blizzard of guac and sour cream and salsa, it’s unrecognizable to partisans of the austere (and rice-free) parcels of refried beans and cheese found in the South. Allegiances run strong.

When Jonathan Gold, LA Weekly’s food critic, wrote a column last year calling San Francisco–style burritos “monstrous,” claiming that they’re filled with things that “neither God nor man ever intended to see the inside of a tortilla,” folks in the Bay Area rushed to their keyboards to defend their own, and a bitter fight ensued. I’ve stood on both sides of the battleground. I ate my first burrito in Southern California back when oranges still grew in Orange County. The simple wraps were one of the defining foods of my childhood. When I moved to the Bay Area and ordered my first burrito, I thought it was a mistake, a misguided interpretation—a burrito made by someone who had no idea what a burrito was.

I soon realized, I was the misguided one. This log the size of a car muffler, with enough calories to fuel a 19-year-old linebacker, was actually a beloved dish. The burritophiles here, I learned, have an almost religious attachment to their favorite taqueria, and their orders are as predictable as San Francisco’s summer fog.

I gave up and switched to tacos. Lately, though, I began to wonder: Maybe my burrito preference was clouded by sentimentality. Perhaps there was more to these 5-pounders than I realized.

On the road: burritos or bust

So I set off on my own tortilla trail—traveling the state from San Francisco to San Diego—to take a sampling. I start in Oakland at La Calle Asadero, a cheery storefront with the good sense not to overwhelm its well-charred chunks of carne asada. Across the Bay Bridge, on a quiet corner in the Mission District, I find juicy al pastor burritos at the El Tonayense truck, filled with spit-grilled pork so succulent that I barely even notice the rice.

I head down the coast to Watsonville, where David Kinch, the chef of the Michelin-starred Manresa restaurant, directs me to the Pajaro Food Center. The market caters to the immigrants who sustain the Central Valley’s agricultural industry, and the taqueria in back specializes in cuts like cabeza (head) and lengua (tongue). I order a buche burrito, thinking it’s pork cheeks; later I find out that I have eaten stomach. Still, delicious.

Down in Anaheim, I hit a joint called El Patio #2 for a Sunday breakfast of crisp-edged carnitas folded into a tortilla smeared with refried beans that cloud the air with a delicious pork-y fragrance. At Super Cocina, in San Diego, I discover burritos guisado, filled with homestyle stews like chile colorado and dark chicken mole. My burrito mind is beginning to expand.

But then I arrive in Los Angeles. Taking a tip from Gold, I drive to Al & Bea’s Mexican Food, a 44-year-old brick building with bars on the windows and a line that stretches to the street. In place of foil, my burrito is wrapped in yellow waxed paper and propped in a tray. The supple tortilla is dusted with flour, folded loosely around a ladleful of lard-rich refried beans and a toss of grated orange cheese, and streaked with a bliss-inducing green chile sauce.

As I take my first bite, I feel like Proust with his madeleine. A lava flow of beans oozes down my chin, and I’m suddenly back in high school. It becomes clear: Though my heart is in San Francisco, I left my burrito in East L.A.

Skip the rice: Less really is more when it comes to burritos. Sour cream, guacamole, and, yes, rice can serve as a cover-up for less-than-quality meats. Great ingredients should stand on their own without a lot of embellishment.

Go for the grill: Look for taquerias that grill their tortillas rather than steam them. They’ll have more character and a better texture that way.

1. Salsa roja (mild to hot): Literally “red salsa,” this classic is made with dried red chiles like guajillos, plus garlic, tomatoes, and often chipotles, which give it a slightly smoky flavor.

4. Salsa x-ni-pek (ouch!): A fiery condiment from the Yucatán, it’s sometimes called Hot as a Dog’s Nose sauce. Made of tomatoes, red onions, sour orange juice, and habanero or serrano chiles, it’s said to be so spicy, it’ll warm a dog’s snout.

5. Salsa verde (mild­—maybe): Tomatillos are the base of this green salsa, which often includes onions, garlic, and cilantro. If jalapeños or serranos are added to the mix, expect some heat.

6. Salsa borracha (mild & smoky): Aka drunken salsa, it’s made from a base of cooked tomatoes. It gets its kick from jalapeños and its name from the beer that’s used to flavor the sauce.

My order: I went for buche; this is the place for that and rare cuts like cabeza and lengua.

My order: Bean and cheese, and, for nostalgia’s sake, an Orange Bang.

My order: The crisp-edged carnitas have a heady pork perfume that knocked me flat.

My order: Green chile and cheese.

My order: Chile colorado with cubes of pork in a red chile sauce.

Next: Reader’s share their favorite burrito spots across the West

We read every letter you sent, and this is what we learned.

The Hunt for the Best Burrito