When it comes to grilling, I’m completely lost. For years I avoided it for fear of a disastrous ending: erupting flames, blackened meat, a ruined meal. Recently, however, I was given the opportunity to document my novice adventures; I would be forced to confront the grill, and, for better or worse, share my results with readers. 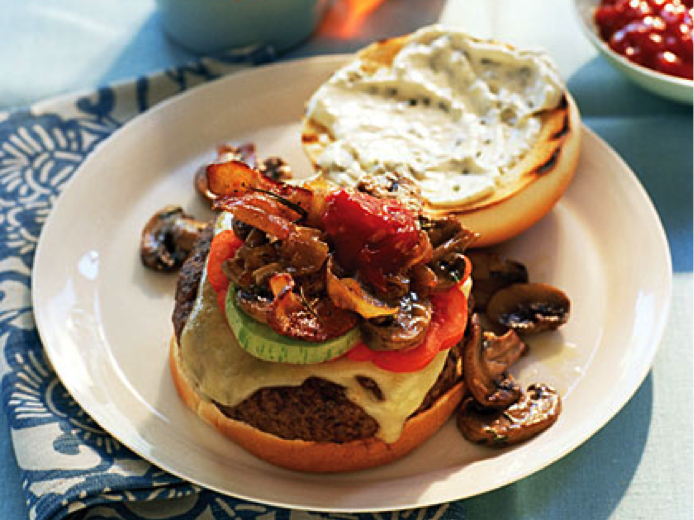 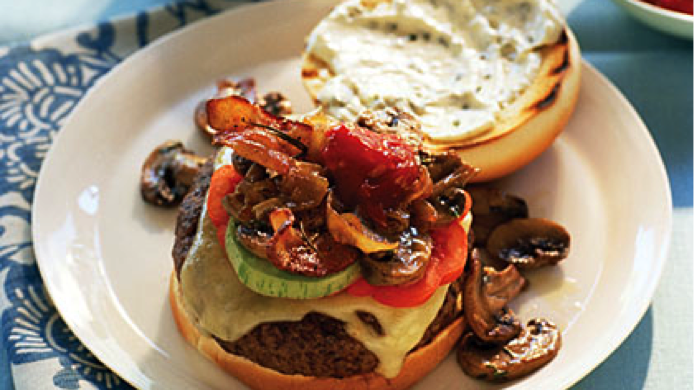 I move fairly confidently around the kitchen. I can sauté, braise, chop, roast, bake, knead; you get the picture. But when it comes to grilling, I am completely lost. For years I have avoided it in fear of a disastrous ending: erupting flames, blackened meat, a ruined meal.

Recently, however, I was given the opportunity to document my novice adventures; I would be forced to confront the grill, and, for better or worse, share my results with readers (who will hopefully include more than my mother). Sunset’s Associate Food Editor (and resident grill master), Elaine Johnson instructed me to start with burgers, an assignment that I liked for two reasons: 1) Burgers are supposedly training wheels for grillers, so I figured I could fare moderately well; and 2) If I had to choose one grilled food to eat for the rest of my life, it would be burgers.

I decided to invite a few friends to my burger expedition, friends who would only slightly berate me if I went down in literal and figurative flames. But I knew I needed side dish cushion if the burgers proved inedible. So I combed the Sunset recipe archives and decided on the Golden Beet and Potato Salad, chef Suzanne Goin’s Fresh Goat Cheese and Radicchio Salad with Figs, and most importantly, a double batch of Basil Gimlets (After a few of those, I was sure that even the gravest of grilling sins would be forgiven).

When I began considering what type of flavored water I could serve, I realized I had stalled long enough; it was time to tackle chef Tyler Florence’s Ultimate Burgers. Thankfully, Elaine had directed me toward a two-minute online grilling tutorial given by chef Florence. I watched it 10 times…in a row. After that pivotal tenth time, I headed to the grocery store to purchase two pounds of ground chuck (Florence recommends using either ground chuck or brisket, cuts with at least 15% fat to ensure juiciness).  With meat (and buns, tomatoes, lettuce, and onions) in tow, I returned home.

I unwrapped the meat, placed it in a large mixing bowl, and seasoned it with salt and pepper. After gently hand-mixing to distribute the seasoning, I divided the meat into four, ½- inch-thick patties and placed them in the refrigerator to rest for 30 minutes (which helps maintain their shape while cooking). This was just enough time to fire up the gill to 450° (Florence instructs a grill temperature of 450° to 550°; I decided to start conservatively), and mix myself an obligatory basil gimlet. 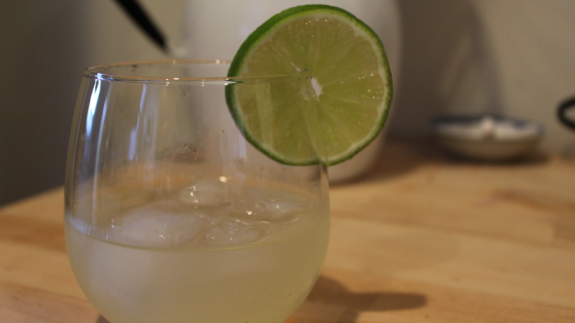 The delicious (and necessary) basil gimlet

After 30 minutes, I removed my patties from the refrigerator. I seasoned the meat with a bit more salt and pepper, oiled a thickly-folded paper towel, and headed outside. 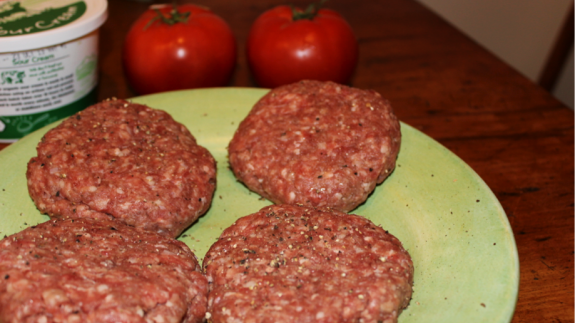 The patties are seasoned with salt and pepper

I opened the steaming grill and with only-slightly-less-than-lightning speed, wiped the grates to prevent the burgers from sticking. A note to the potential griller: While Florence recommends a paper towel, make sure the paper towel is thick enough; otherwise you will end up with a medium-rare hand. Or play it safe and use tongs.

I placed the four patties on the grill, lowered the top, and set my timer for three minutes. As those excruciating 180 seconds passed, I had to forcibly restrain myself from peeking at the progress and allowing all the heat to escape. But when the alarm finally sounded, I lifted the lid to see something I had only previously dreamed of…grill marks. 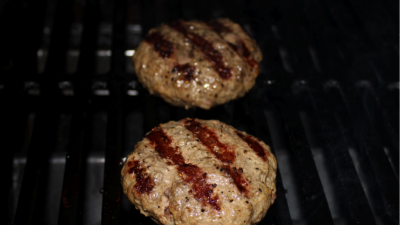 Excitedly, I flipped my burgers and waited another three minutes before pulling them off the grill. On went my buttered buns, and 45 seconds later, we were ready to eat.

A true condiment lover, I adorned my burger with a healthy slathering of ketchup, mustard, Sriracha aioli, pickled onions, and lettuce. I piled my plate with the accompanying salads and took a deep breath as I picked up my knife. This was the moment of truth. I whispered one final prayer to the grilling gods and then I cut, revealing a light pink center that was (a tad) more medium than my desired medium-rare. 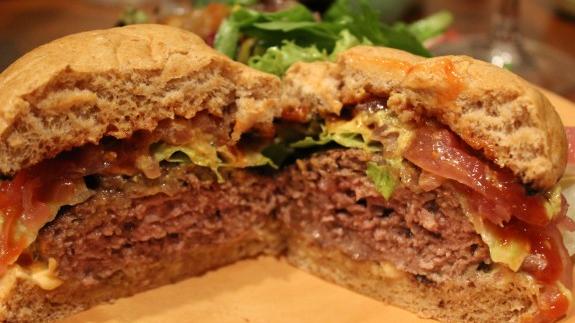 Sitting at the table with my friends, a rainbow of condiments smeared across my face, I could not remember why this had taken me so long to do. Was it the best burger I have ever tasted? No. But as is swiped my finger across the last remaining drop of aioli and looked across the table at three other empty plates, I knew it was not half bad.

Find a few more of our favorite beef burger recipes below!

Sink your teeth into a delicious restaurant-style, hamburger recipe made from lean beef. Skip the prepackaged patties and take the extra time to craft up your own, and that little extra effort will be worth it. To make cheeseburgers, about 1 minute before burgers are done, top with sliced cheese; continue cooking until cheese begins to melt. This recipe works equally well on both gas and charcoal grills. For more great grilling tools, including the always excellent Lodge cast iron skillet, check out this roundup of Sunset favorites.

At Umami Burger restaurants across the U.S., these juicy, full-flavored, mildly spicy burgers are seasoned with Umami Dust and Umami Master Sauce. Soy sauce makes a good substitute! Whip these up when you’re looking for a classic burger with an added bite. The sauce, made of roasted green chilis and mayo, will become your go-to sandwich spread from here on out.

Earthy and rich, these fabulous burgers were created by Susan Herrmann Loomis, an American who runs the On Rue Tatin cooking school in Normandy. The recipe is adapted from one in her new book, French Grill: 125 Refined & Rustic Recipes, a collection of recipes and tips perfect for us Western cooks, too.

Tyler Florence’s burgers are extra juicy and flavorful because they’re made with brisket, but chuck works too (don’t use extra-lean meat or the burgers will be dry). The toppings are what set this burger apart from your basic burger. With sauteed mushrooms, caramelized onions, and horseradish mayo, this burger is bursting flavor with every bite.

Cherry and Brie Burgers with Rosemary and Grilled Onion

These burgers are only quarter-pounders, but they look heftier because the meat is mixed with ground dried cherries (a powerful antioxidant) and a little bulgur. The seasonings and cheese take the cherries in a savory direction, keeping the burgers from being too sweet.