“These are by far the oldest vertebrate tracks in Grand Canyon” 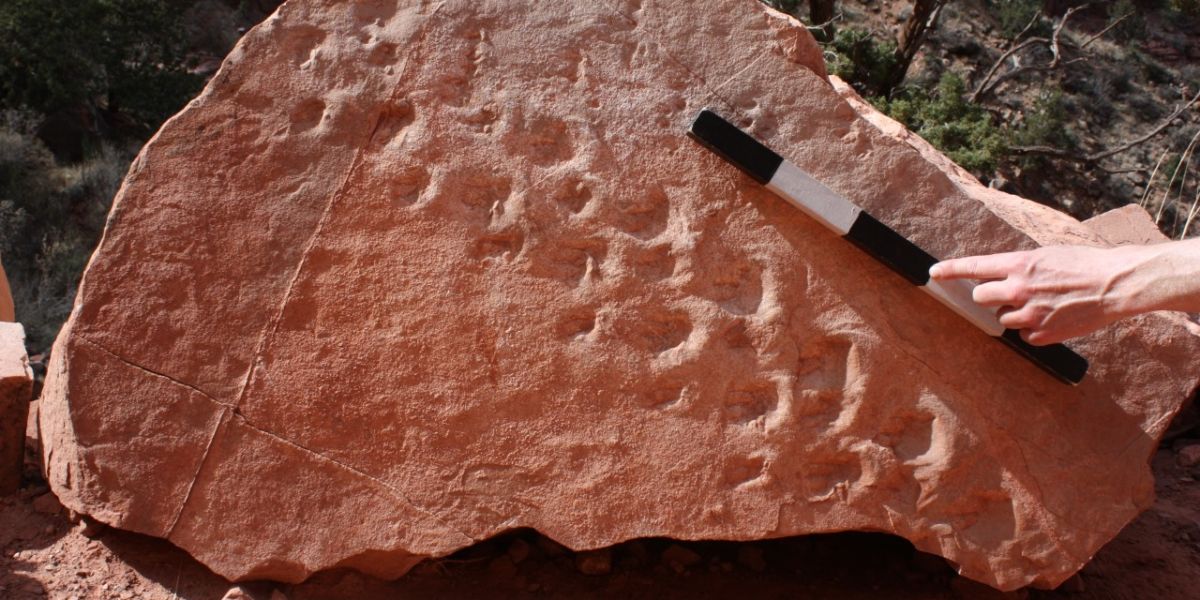 Courtesy of the National Park Service
Tracks on this boulder were discovered in 2016.
Written by J.D. Simkins August 24, 2020
Share this story

I’ve always looked with deep envy upon those fortunate individuals who accidentally discover an artifact long hidden from human eyes.

An 8-year-old girl is playing in a lake in Sweden when she plucks what she thinks is a stick from its shallow depths, only to discover it is in fact a 1,500-year-old sword.

A man going for a leisurely stroll in northern Russia, if there is such a thing, comes across a fully intact head—brain, tongue, fangs, fur, and all—of a 40,000-year-old Pleistocene wolf, a stunning result of permafrost preservation.

The list of fortuitous discoveries is extensive, and was made longer in 2016 when a visiting Norwegian geology professor hiking with a group of students through the Grand Canyon stumbled across a boulder peppered with what appeared to be fossilized footprints.

The boulder, which had been part of the Grand Canyon’s Manakacha Formation prior to collapsing, rested in plain sight of blissfully ignorant hikers until Allan Krill and his students came along.

Curiosity prompted the professor to send a photo of his group’s find to Stephen Rowland, a paleontologist at the University of Nevada Las Vegas, where Krill was visiting.

To Krill’s surprise, Rowland was able to determine that the tracks not only came from two separate animals that were traversing a sand dune, but they were imprinted an astonishing 313 million years ago.

“These are by far the oldest vertebrate tracks in Grand Canyon, which is known for its abundant fossil tracks,” Rowland said in a National Park Service release.

“More significantly, they are among the oldest tracks on Earth of shelled-egg-laying animals, such as reptiles, and the earliest evidence of vertebrate animals walking in sand dunes.”

Rowland said his department was able to place the precise age of the tracks within a five million year window due to the location of the boulder prior to its collapse from the canyon wall.

The professor also noted that the particular pattern of the tracks revealed what is referred to as a lateral step sequence.

“Living species of tetrapods―dogs and cats, for example―routinely use a lateral-sequence gait when they walk slowly,” Rowland said. “The Bright Angel Trail tracks document the use of this gait very early in the history of vertebrate animals. We previously had no information about that.”

Rowland and his department published their full findings on the fossil footprints this week in the Plos One journal.

A tremendous discovery for them, a tremendous amount of jealousy for the rest of us.

50+ Reasons to Love the West

6 Iconic National Parks to Add to Your Bucket List