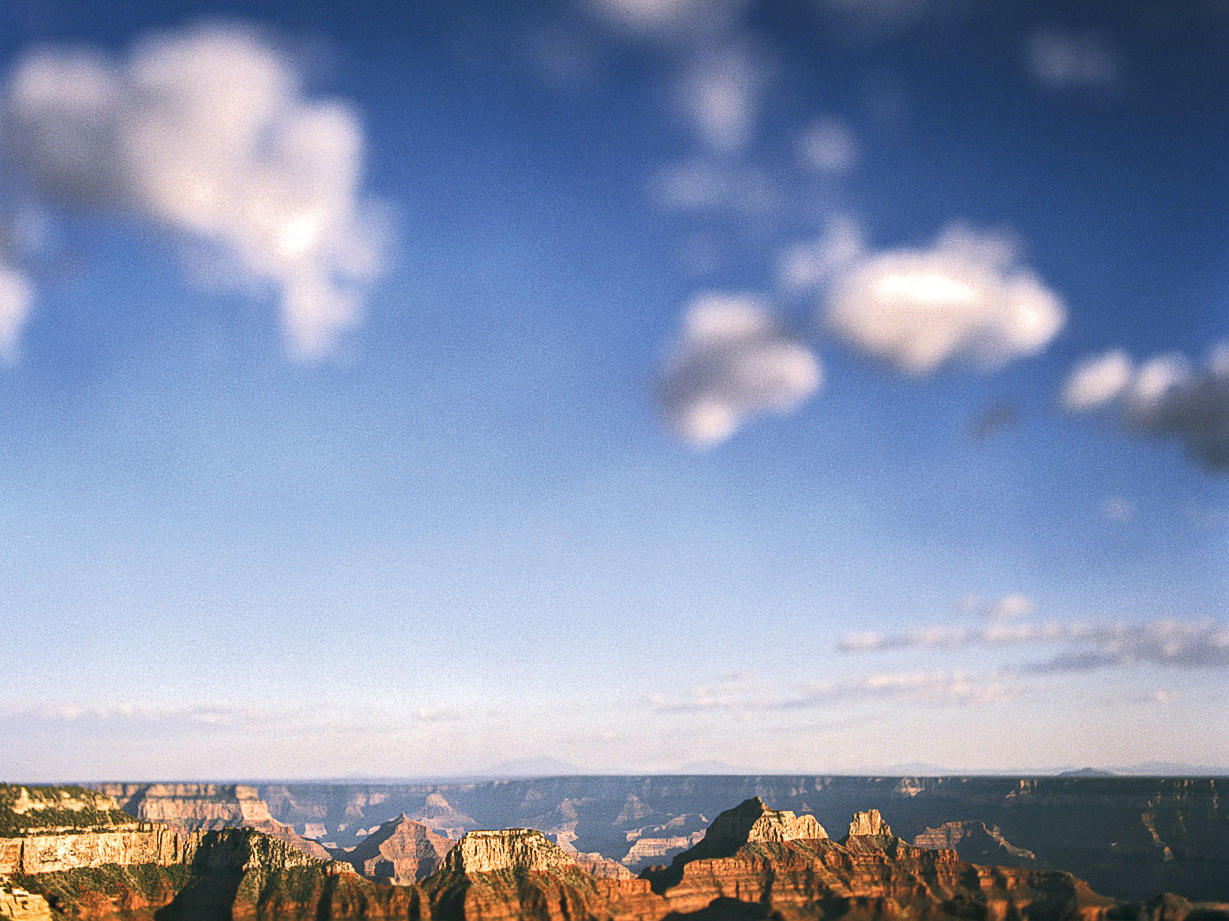 Russell Kaye
The North Rim of the Grand Canyon rests near the southern border of Utah. The air from a perch here is a little cooler than the South Rim due to it's higher elevation.
Written by Walter Kirn July 26, 2010
Share this story

It’s never too late, my traveler friends kept telling me, to visit the Grand Canyon for the first time—but, for me, it was definitely getting there. I was 47 years old. I’d lived in the West (Montana) for 20 years and was growing immune, I thought, to natural wonders.

Plus, life was getting busier by the month. My editor was clamoring to see a sample chapter of my next novel, and Twitter was catching on among my colleagues. And something about the canyon’s iconic rep, its very grandeur, seemed off-putting. I wondered if one reason I’d avoided it was a vague lifelong fear of being dwarfed by something much larger than my own ego.

After a night spent driving across northern Arizona in an unseasonable blizzard, my girlfriend, Amanda, and I were tired and cranky as we headed toward the South Rim. Because we were late for a mule ride that we’d signed up for, neither of us was in Great Expectations mode. We parked our rental car in a crowded lot next to the stately old El Tovar Hotel at the center of Grand Canyon Village, then raced into the lobby to check in, skipping the overlook 20 yards away. What shameful, hectic, narrow lives we led.

By the time we found the mule corral that has served for almost a century as the jumping-off point for the rides, the startlingly colorful crew of wranglers who run the operation were already settling tourists’ posteriors into rigid, scuffed-up leather saddles.

Still not knowing what lay before us or whether we’d feel let down by perhaps the most postcarded vista on planet Earth, we bounced along on our sturdy but naughty animals (my mule required constant reining in, so determined was he to chew branches near the trail) through a shadowy forest of piñon pines. The animals’ hooves raised fine, dry puffs of dust that blew back into my face and tickled my nostrils. Whenever my mule, the tallest of the bunch, chose to pick up his pace, the mule in front of me decided to slow down or stop entirely, leading to several near-collisions and one ornery kick in my mule’s chest that his muscular body serenely absorbed but whose shuddering impact shook my saddle and ran straight up through my spine.

In the early 1900s, Grand Canyon Village served as a mule ride starting point for the adventurous cowboy. Today, visitors climb into leather saddles to tour the canyon from the very same corral.

The mule train stopped at a spot called the Abyss, where we dismounted and trudged toward the railed lookout. Suddenly, I wasn’t hurrying anymore. I’d glimpsed, for less than a second and not clearly, an orange corner of the primeval chasm that I’d come all-too-close to never seeing. Now I was afraid that when I did, I’d either be overtaken by regret or crushed by disappointment.

My real reaction, it turned out, was almost impossible to characterize, as was the new world around me and beneath me. The canyon seemed to make human emotion irrelevant. Where should I focus my vision? No idea. What direction should I face? No clue. I was standing before an inverted mountain range, a fantastically detailed, colossal absence. It confounded my senses and rendered them nearly useless. The moment (which lasted 20 minutes, in fact) reminded me of scary tales I’d heard about skiers who’d been buried in avalanches and lost track of up and down, of left and right. What I was buried in wasn’t snow, however, but a far more abstract substance. Time. Or what preceded time.

A temple of the Gods

At supper in El Tovar’s dining room, surrounded by mid-20th-century murals depicting a simplistic yet evocative version of Native American customs, I gradually regained my bearings. The thick-cut lamb chops helped, as did the meticulous, formal wait staff who kept refilling my glass of ice water with hushed efficiency. By dessert I felt like a human being again, capable of performing our species’s great trick: using thought to make the incomprehensible intelligible.

The Grand Canyon is not just a geological spectacle. It’s also a cultural artifact, a myth, imbued with a conscious, manmade aura of romance. Or a woman-made aura of romance, one should say. The Santa Fe Railroad, which opened El Tovar in 1905 as a sanctuary in the wilderness for well-heeled visitors from more civilized parts, assigned the job of defining the canyon’s meaning to an architect named Mary Colter. She designed El Tovar’s interior, which blends European and Southwestern motifs. And she designed a series of structures (including Hopi House, a simulated pueblo where tribal crafts are sold, and the Lookout Studio gift shop) whose inspiration was Native American. The result is a distinctive monumental vision. The Grand Canyon: a temple of the Gods. A spot where ancient human spirituality meets eternal natural artistry.

On our second day, we lit out for the Watchtower, which, for me, is Colter’s masterpiece: a turret constructed of thousands of small stacked rocks, at the South Rim’s far eastern end. The vista there is particularly expansive. It allows a vivid prospect of the winding Colorado River as well as the plateaus and ridgelines of the nearby Navajo Nation. Amanda climbed the twisting stone staircase ahead of me, passing notchlike windows that framed the huge view in little portrait-size fragments.

Going up, we went by faded geometric murals by Hopi artist Fred Kabotie, and when we reached the topmost floor, the canyon was not the same one I’d first encountered at the conclusion of the mule ride. It no longer disoriented and terrified but, in accordance with Colter’s ideals, it elevated the mind, enlarged the heart. And that was what I craved just then, I realized, after so many, so many decades of traveling toward a place that felt suddenly, uncannily like home.

Walter Kirn’s books include the novel Up in the Air and his 2009 memoir, Lost in the Meritocracy. He lives in Livingston, Montana.