Top River-Rafting Trips in the West

Whether you’re into lazy-day floating or rip-roaring rapids, there’s a river out there for you 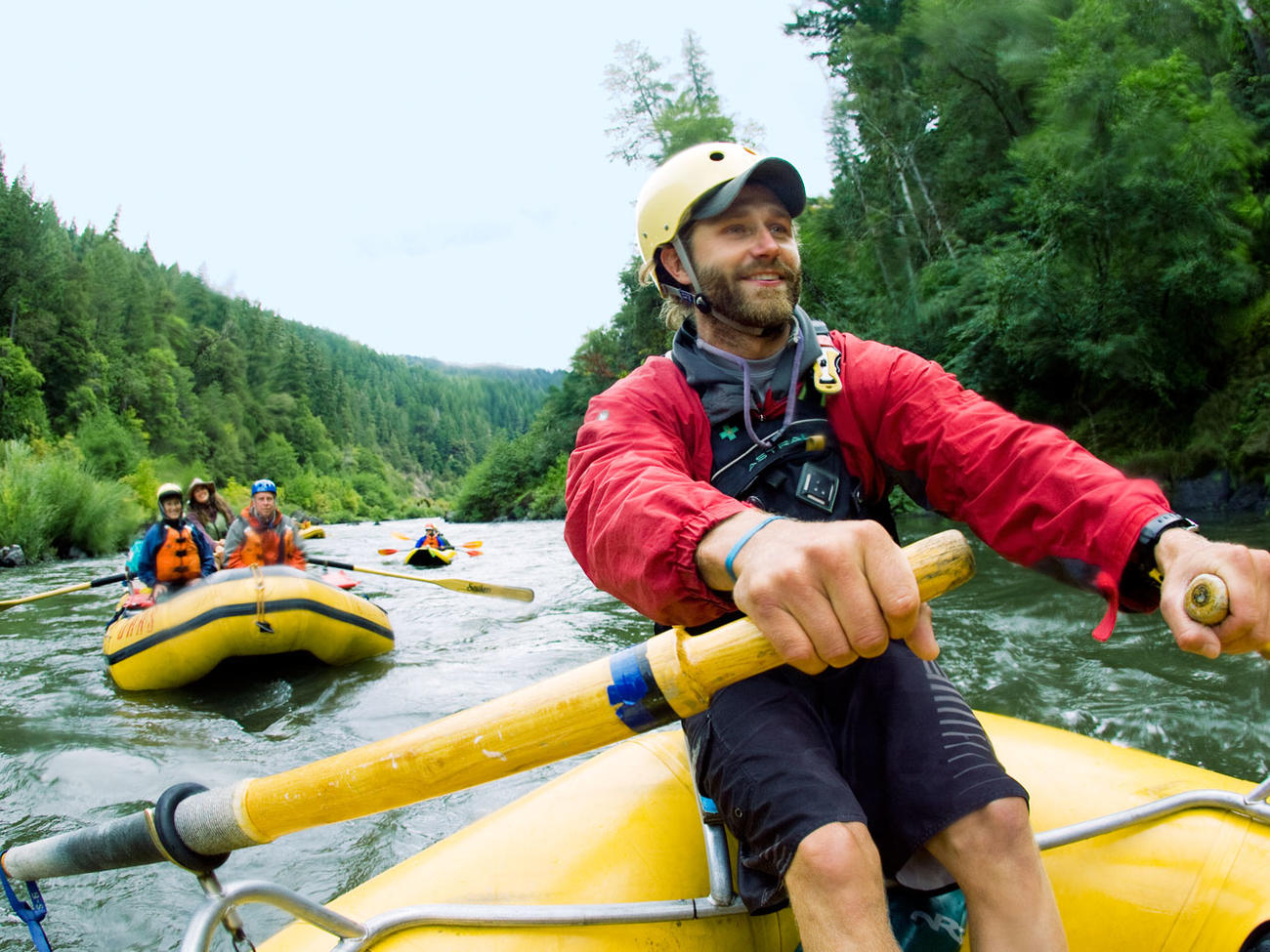 The mild trip: The Rogue River

Day 1: The launch: At the tiny, woods-ensconced Galice Resort, the damp air smells like a sharpened pencil. It makes me think of Cabernet Franc. For some people, that first whiff of the uncorrupted outdoors might trigger a set of survival instincts. But I have none of those. What I have are ephemeral associations with lesser-known Bordeaux wine varietals. And so here I am, on a Wine on the River tour with a winemaker, a pair of chefs, a nimble river crew, and a handful of fellow fortunate souls. We get the necessary primer before putting in: Drink lots of water, they tell us. Always, but especially on this trip, what with the three cases of wine being loaded onto the rafts.

Taking it easy back at camp at Bear Beach on the Rouge.

“Lunchtime”: That’s the answer I get when I inquire about the time. Days here are measured in meals. We’ve lounged away the morning on a people-free, rapids-free stretch of river in a thickly forested gorge, under a cover of damp fog—like drifiting through a rain cloud. Even with limited visibility, we’ve seen a great blue heron, a kingfisher, Canada geese, an osprey, a quick glimpse of an otter, and a bald eagle. The river is calm, and we don’t have to paddle if we don’t want to. Yet, somehow, a stretch and a bite to eat are in order. The chefs have managed to pack all our camping food, gear, and elegantly rustic table settings on the rafts, leaving the rest of us to kick back while they set up and break down each feast.

Wine-thirty: After several miles of floating, we pull off at the Tyee Campground, a woodsy gravel bar. For the first time in my life, I must assemble a tent alone. But the payoff is grand: I sit down to cumin-grilled Tawanda Farms lamb chops with apricot-jalapeno chutney, assorted Oregon cheeses, fruit, eggplant puree, green olive tapenade, cucumber salad, and red pepper relish with wontons and flatbread; followed by pan-seared king salmon with Oregon wasabi-thyme aioli, lemongrass couscous, and ginger-citrus slaw; and finally topped off with Dagoba chocolate s’mores with homemade marshmallows—each course paired with wine. It’ll go on like this for two more nights. I will persevere.

Day 2: Splashing around: I try out one of the inflatable kayaks we’ve been towing. Nobody, including me, seems to care that I can barely steer. It could just be hypothermia from playing in the 58º water, but I’m feeling close to the river.

Group bonding: This evening’s icebreaker involves a spree of mutual toenail painting. Oh, and wine. Lots of wine. Personalities have emerged. Maybe it’s the Sewell Rhône Blend talking, but I like these people. After dark, the stars go so many layers deep that a few of us decide to sleep directly under them, and our tents become mere storage units.

Wines are matched with every course at dinner.

Rafters discuss the day’s activites over a glass of wine at the campsite.

Day 4: The last toast: One last bracing swim and one final meal, when we compare favorite flavors: the Cinsault Rosé, the Malbec, the Fiano, which worked so well with that asparagus; the crawfish cakes with remoulade, the seared duck breast, the lemon sponge cake with huckleberry compote, the everything else. It’s safe to say that the uncorrupted outdoors has heightened my sense of deliciousness.

Day 1: Entry: My first glimpse of the Chilko is from 15,000 feet up in a tiny 10-seater plane, looking down the longest raftable stretch of continuous Class IV whitewater on the continent. Did I mention this is my first-ever rafting trip?

Beer talk: Our guide Mark has a shaggy river-rat beard and a Canadian lilt, and he’s as skinny and spritelike as he is ruggedly reassuring. He instructs the eight of us—a motley crew of three businessmen, a doctor, a lawyer, and a ranching couple—on what to do if we run into a bear, how to tell a grizzly from a black, and how to prevent Mace mishaps. We’re introduced to the Groover (a portable toilet).

Day 2: Calm water: After a paddling 101, our three rafts head out through the riffled water that the guides—Mark, Brian, and Jorge—refer to as “calm.” Which makes me and Ginny, the other whitewater rookie, mighty nervous about the hardcore rapids to come. We ride 22 miles, dipping our water bottles into the 50º glacier water on the way. The landscape looks surprisingly like New Mexico, with pine-covered mountains and mesas—plus moose! We spot a chocolate-hued mother with calf, and two bald eagles.

Day 3: Rapids!: Here they come. Deep breaths. We don our helmets, wetsuits, and life jackets, and practice paddle maneuvers. Back paddle. Hard forward! We vanish into the rapids, as the raft bends and catapults and the waves pound through us on the famous great White Mile: 12 miles of rapids in 55 minutes—yes, that longest stretch of continuous Class IV on the continent. Mark slides our 18-foot-2-inch raft through an 18-foot-4-inch gorge. We officially become whitewater junkies.

At camp: Tents are pitched while the guides set up and find a scenic spot for the Groover. Dinner is grilled chicken, fresh veggies with ginger butter, tiramisu, and five bottles of well-deserved wine.

Day 4: An “easy” day: Our raft gets hung up on a protuding log inside a rapid. Ever been inside a washing machine? On the “very cold” cycle? Jorge deftly extricates us, and we lay out clothes to dry on the rocks. We’ve entered hoodoo country.

Day 5: Class III cakewalk: Class III? No sweat. We talk politics as we run them. Camp goes up at Big Creek, with 200-year-old pines and grassy meadows. Mark reads stories about spectacular Groover mishaps (picture it overturning while you’re in the way).

Day 6: The gaping jaws of death: Hang on! Hard forward!! Time for the 8-foot waves of the daunting Farewell Canyon, and I’m paddling too intently to see past the waves. We just clear the foam when Brian yells, “Bear!” and a young black bear runs up the cliff. After lunch, we take the two final, gargantuan rapids called Gaping Jaws of Death and Brains Smashed In. I’m drenched. We high-five with our paddles, and pull up to the raft carrying the beer cooler for a toast. Later, there’ll be Champagne and reminiscing on a sandy beach under a red sky at our last campsite. And more Groover stories.

Class I: Flat with slight riffles. Play Jenga, sip a martini while you float. Who it’s best for: People who drive below the speed limit.

Salmon River, ID: Deep in the wilderness, Malibu-esque sand beaches are perfect for sunbathing, camping, and, well, drinking. Something about a river just beckons a brewski, so following smoking-hot days on the legendary River of No Return with brewmaster tastings and pairings. Beer trips Jul; Lower Salmon River, orangetorpedo.com; Salmon main fork, oars.com

Green River, UT: Amid a million uninhabited acres of desert sit Desolation and Gray Canyons—Butch Cassidy country. Glide past dramatic rock formations, cottonwood groves, and bighorn sheep. On the side, hike to ancient petroglyphs and outlaw hideouts—or keep it mellow with yoga or a landscape photography trip. Best Jun–Aug; utah.com/raft

Arkansas River, CO: If your “mild” is more about what happens after a day on the river, try an inn-to-inn rafting trip. Tackle intermediate rapids by day, then indulge in a hot shower and comfy bed each night, plus dinner out in nearby towns. Milder Jul–Aug; inaraft.com

Class IV: Fast-paced chutes and drops with flip potential. Paddle hard; tell your wife you love her. Who it’s best for: Hard-core adventurers.

Class V: If you do everything right, you’re smiling—anything wrong, you’re not. Hold on for dear life. Who it’s best for: Evel Knievel, maybe Laird Hamilton.

Class VI: Niagara Falls (for real). Who it’s best for: No one.

Selway River, ID: You can count on the Selway for gin-clear water, a natural hot spring, and thrilling drops. Limited access means you’ll have it to yourself. We hear the rainbow trout’s pretty great too. Best Jun–Jul; arta.org or threeriversrafting.com

Tuolumne River, CA: Three hours from San Francisco, take the ultimate rodeo ride over braided channels in a secluded canyon. The crazy Cherry Creek/Upper Tuolumne stretch isn’t for everyone, but the river’s other 18 miles are bucket-list material for the rest of us. Apr–Sep (beginner friendly Jul–Sep); oars.com

Top River-Rafting Trips in the West