Inspired by his time paddling out into the Pacific, pro surfer Kelly Slater turns his attention to the environment 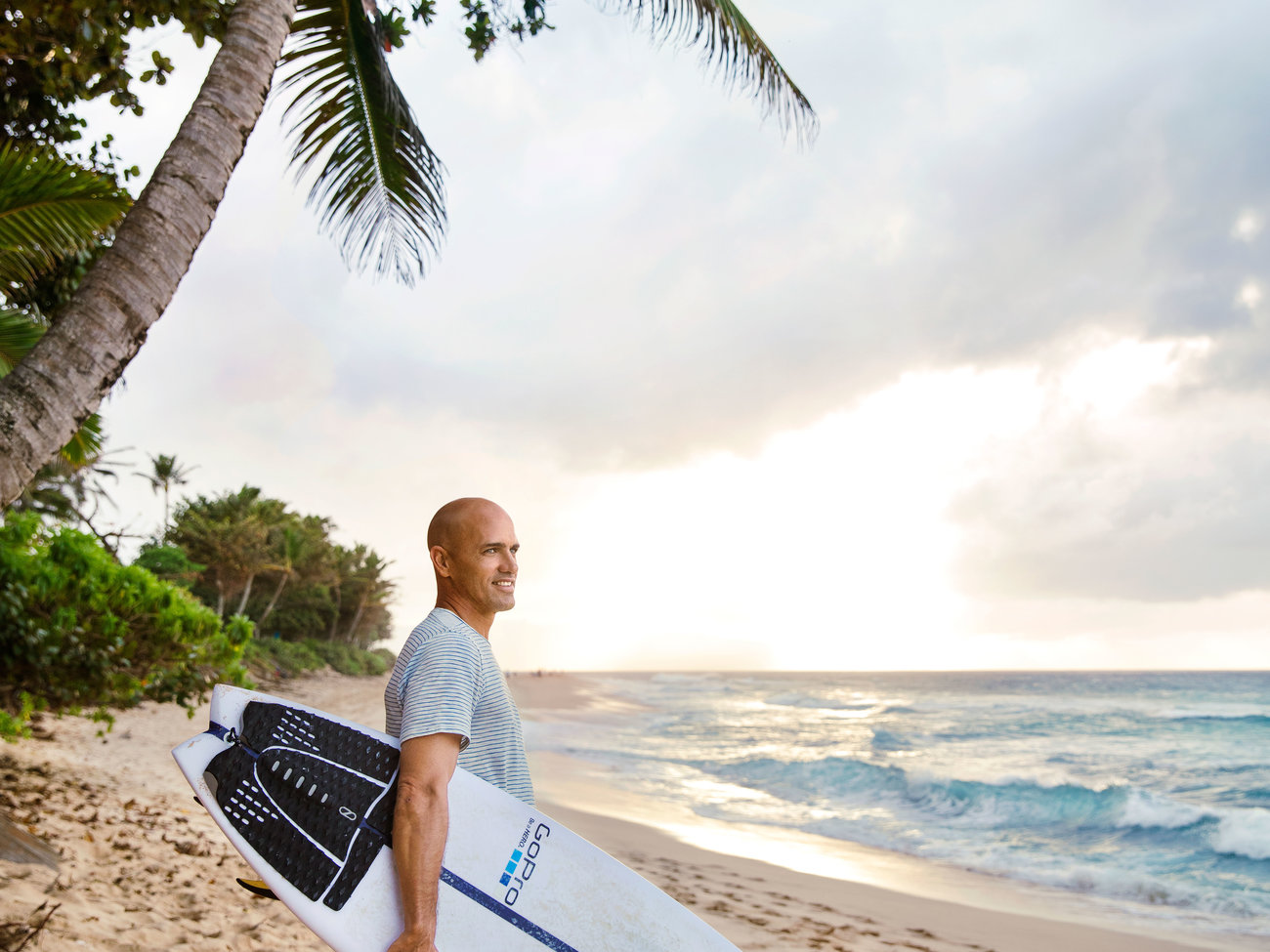 The greatest surfer of all time answers the door wearing fuzzy slippers. Kelly Slater offers a big smile and a handshake at the entrance to his midcentury cottage in San Clemente, California, as his Chihuahua mix, Action, warily sniffs my feet. I’m ready for Slater’s squared jaw and piercing blue eyes but unprepared for all the searching questions about my tea preferences as he ticks off a full menu of loose leaves, nondairy milks, and natural sweeteners. A few minutes later, Slater shuffles back into the living room with a couple of chocolate-ginger chais with coconut nectar.

We’re sipping our brews just a few miles from Trestles Beach, where Slater captured his first pro contest, back in 1990. But his surfing story begins in his hometown of Cocoa Beach, Florida. There, the towheaded boy was out on a surfboard by the age of 5 and winning big amateur competitions before long. “It all happened so fast,” says Slater, now 45. “I started going to places like Puerto Rico and Australia and Hawaii. Pretty quickly the world became my play-ground.”

When he was 18, he turned pro with outsize ambitions. But he didn’t just hope to dominate his sport—he was determined to change it. Drawing inspiration from skateboarding and snowboarding, Slater started doing vertical air maneuvers and tail slides that no one had pulled off on a surfboard before. “I wanted to have style and grace and power like my heroes—but do something more futuristic,” he says. “I wanted to create a new style of surfing.”

In doing so, Slater established himself as the Michael Jordan of his sport. Slater was just 20 when he became the youngest surfer to ever win a world title. In 2011, at the age of 39, he became the oldest person to win that title, giving him a mind-boggling 11 world championships. (No one else has ever captured more than four.)

These days, though, Slater’s focus has shifted from a single-minded obsession with winning to what he calls “a more balanced life.” He’s an entrepreneur with multiple companies, an advocate for the environment, a globe-trotter with deep passions.

One venture that has galvanized his fellow surfers’ attention is the Kelly Slater Wave Company, an operation built around a manmade wave facility in California’s Central Valley. Artificial surf parks are nothing new, but no one had figured out how to make a perfect tube until KSWC did last year. While not yet open to the public, online videos of Slater riding a flawless barrel have notched millions of views on YouTube.  “It’s not the raw experience you get by throwing your board in the car and finding a wave at some beach somewhere. It’s the opposite of that,” says Slater. “I think for some people it fills this fantasy in their head: the right tide, the right swell, no crowds, perfect conditions, the right wave. Some surfers might not get one ride like that in a whole year.”

While that enterprise is still in the development phase, Slater’s clothing line, Outerknown, is already in stores. After he walked away from a decades-long sponsorship deal with Quiksilver in 2014, conventional wisdom suggested that Slater would throw his weight behind the mass market. Instead, Outerknown’s trunks and tees are assembled in small batches using recycled fabrics; the biodegradable shipping bags are made out of sugarcane. “I knew from the start that I had no interest in making cheap clothing at whatever cost,” he says. “If I can make a little less money and send a much bigger message, that’s a good thing.”

That message of caring for the Earth—which he campaigns for loudly through his businesses, social media, and ITSNOTOK shirts by Outerknown (the profits of which he donates to the Ocean Conservancy)—came about through his time in the water. “Surfers are like the canaries of the sea,” he says. “We get sick if there are a lot of sewage spills. We see the garbage in the water. This year I’ve been astounded at how much crap I’ve been seeing on the beach, more than ever.” Slater kicks his slippers onto the coffee table and starts listing the damage to bird and fish species he’s seen, the half-life of plastic he’s observed in the Pacific.

Over the years, Slater has become something of a purist in his approach to personal health. He rarely drinks alcohol, doesn’t smoke, concentrates his diet on sustainable fish, and avoids sugar. (And no, the coconut nectar in his chai doesn’t count.) He’s also attempting to take a more Zen approach to surfing. “I used to be so obsessive. Anything other than a win was a loss, but now I try to be in the moment,” says Slater, now in his 26th season as a professional surfer. “When athletes talk about being in the zone, that’s all about being in the present, being free to make mistakes and not worry about the outcome but trusting your own instincts.”

Such thinking might sound a bit crunchy, but don’t be fooled. Slater won two pro events last year, giving him 55 career World Surf League victories—and he’s aiming to make it to the winners’ podium this year too. “If I’m going to do this, I’m going to do it right,” says Slater, as he gathers a couple of boards to head down to the beach. “It’s not a bad gig.”

Surf Camps That’ll Teach You to Shred Like a Pro

10 Essentials to Pack for a Weekend at the Beach

Plan the Best-Ever Beach Day with Your Dog