The 41 Best Campgrounds in Washington, Oregon, and the Pacific Northwest

Our favorite campgrounds in Oregon, Washington, Idaho, Alaska, and Canada 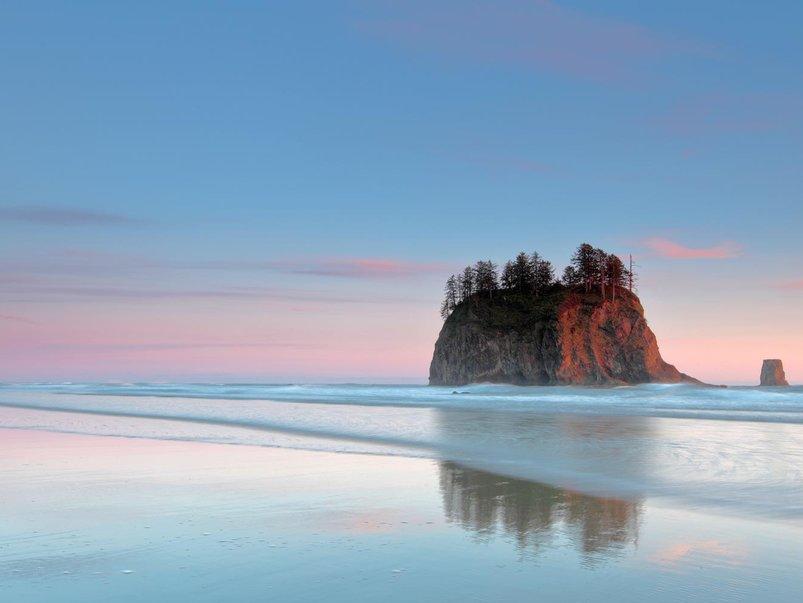 A wooded spot along Early Winters Creek offers a cool base for exploring the northern Methow Valley. On hot days, head to the swimming beach at Pearrygin Lake State Park, near Winthrop. No reservations; 509/996-4003.

Keep an eye out for mountain goats near this campground (accessed from the White River entrance) on Mt. Rainier. For wildflowers, hike 3 miles to Glacier Basin or 4.2 miles up, up, up to Summerland via the Wonderland Trail. No reservations; 360/569-2211.

This 5.5-mile-long lake in the state’s northeastern corner is famous for its trout fishing and swimming. Bring your passport and take a day trip to the historic mining and railroad town of Grand Forks, British Columbia, 27 miles north. Book online at washington.goingtocamp.com; 360/902-8844.

After you summit 2,400-foot Mt. Constitution or conquer the park’s bike trails, cool off by Cascade Lake at this shaded campground. Skip the long car-ferry lines and walk on with your gear; the Orcas Island Shuttle ($5 one-way; www.orcasislandshuttle.com) runs all summer long. 360/902-8844; book at parks.wa.gov/reserve.asp

On the Key Peninsula, Penrose is the best of two worlds ― Northwest forest and Puget Sound beach, with a Frisbee-perfect lawn connecting the two. The group campsite near the playfield and beach can sleep up to 50 people. 360/902-8844; book at parks.state.wa.us (group site: 888/226-7688).

Awe-inspiring views over the Strait of Juan de Fuca and colorful tidepools at Tongue Point Marine Life Sanctuary make this a standout. Choose a spot with a view over the strait―we like site 63. clallam.net or 360/928-3441; book by mail (details on clallam.net).

The best spot at the eclectic, 38-acre Doe Bay Resort with its 27 sites on Orcas Island isn’t a crunchy cabin, one of the yurts, or a Buckminster Fuller–like dome. It’s a simple tent site called Seal Landing: The grassy bluff on the point of Otter Cove has a front seat to sunrise, and it’s just steps from the new soaking tubs, a sauna, and a cafe serving organic, locally sourced food, from scallops to foraged nettles. doebay.com

Hemmed in by rugged headlands and bookended by natural arches with keyhole views, Olympic National Park’s broad Second Beach—reachable by a quick 0.7-mile hike—is the coast’s crown jewel. Pitch your tent on the sand and unzip to views of seals, bald eagles, and the Quillayute Needles, a half-dozen surf-battered islets. No potable water; nps.gov/olym

Get a true backcountry feeling without ditching your car. At the meadowed 14 sites of the highest campground in Olympic (at 5,400 feet), you’ll likely be outnumbered by ungulates. The short jaunt up nearby Blue Mountain nets 360° views of jawbone peaks and the Strait of Juan de Fuca. And summer stargazing doesn’t get much better. Jun–Sep; no potable water; vault toilets; no reservations; nps.gov/olym

It’s easier than ever to snag an overnight among the lowland forests and sub-alpine areas along the Wonderland Trail in Mt. Rainer National Park, thanks to a new online reservation system. nps.gov/mora

The 7 heated cabins in Federal Way have been updated with queen-size futons and bunks that sleep three. parks.state.wa.us

Want San Juan Islands beachfront, all to yourself? The two rustic sites on the west side of this 188-acre island are set aside for human- or wind-powered arrivals only, so they’re perfectly quiet (except for the bark of sea lions). And the firepit—on a bluff, with logs for benches—is like a box seat for spectacular sunsets. Open year-round (potable water May–Sep); vault toilets; no reservations; parks.state.wa.us

Feel like a desert explorer on 2 miles of sand dunes that stretch from your campsite to the Pacific. Or cool off in the park’s two freshwater lakes. To avoid ATV noise, stay away from H Loop. 541/997-3641; book at reserveamerica.com

The ultimate fishing lake abuts this campground in the Blue Mountains. Hang a hammock under ponderosas, cast a line from a dock, or ramble along the 1-mile lake trail. Check out the Morrow County Fair and Oregon Trail Pro Rodeo, 36 miles north in Heppner, No reservations; 541/676-9187.

This tiny gem (11 campsites) is located at 5,700 feet in the Strawberry Mountain Wilderness. Fish at trout-stocked Little Strawberry Lake, a nice 6-mile round-trip from the campground trailhead. No reservations; 541/820-3311.

Fire towers were built specifically with windows looking out in every direction. So at cozy Fall Mountain Lookout, a 14- by 14-foot room and catwalk atop a 20-foot scaffold in Malheur National Forest, that means unobstructed gazing at the Strawberry Mountains and the John Day Valley. It’s accessible by car and has electricity, a fridge, stove, heater, and lights—and was recently refreshed with a new coat of robin’s-egg blue paint. Late May–Oct; book at recreation.gov

Watch dawn turn Mt. Hood a glowing pink from the “F” Loop at Lost Lake Resort and Campground—shore sites 1–31 stare the volcano in the face. A fishing license lets you troll for Walter, the rumored 50-pound trout with a beard made of thousands of dollars worth of lures. The 2-mile, 1,400-foot thigh burner up Lost Lake Butte Trail rewards with 180° views of Hood and Mt. Adams. Late May–Oct; reserve at reserveamerica.com/camping/lost-lake-resort-and-campground

At the westernmost point in the state, Cape Blanco State Park’s ocean views are wide open. Come morning, trails to the beaches and bluffs are mostly empty, and the line is short to the old lighthouse with its sculptural Fresnel lens. All four cabins have the basics (bare beds with vinyl mattresses, fire rings, covered porches) but Hawk has the best water view. oregonstateparks.org

Wallowa is a gorgeous mountain lake with lots of things to do along with breathtaking views. Once you’ve set up camp at this northeastern Oregon lake, you may want to spend a few hours gazing at the sapphire water reflecting the surrounding Wallowa Mountains. After that, you have heaps of choices: hiking, fishing, swimming, a tram ride to the summit of Mt. Howard, and art shopping in nearby Joseph, known as a bronze-casting center. Open year-round; oregonstateparks.org.

A great base for exploring Oregon’s largest state park. Don’t miss the 7-mile Trail of Ten Falls, a misty trek among waterfalls, ferns, and wildflowers. Take a dip in the swimming area at Silver Creek. 503/873-8681; book at reserveamerica.com

Take in Lewis and Clark country from this grassy, shaded campground along the shores of the Snake River. Hike an easy 1.5 miles south to the basalt rocks, a 150-foot-tall ancient lava formation. 208/799-5015; book at parksandrecreation.idaho.gov

From site 22, near Lookout Rock, you get a sweeping view of the 14,000-acre City of Rocks in southern Idaho. The “city” is hundreds of granite monoliths, some more than 600 feet high, that rise out of a gently rolling sagebrush landscape. Take in a desert sunrise, watch the rock climbers as they spider up the planetary formations, and keep your ears peeled for the song of the reserve’s 142 species of birds, including mountain bluebirds and warblers. Book at reserveamerica.com

Dworshak State Park has 105 hike-in or boat-in roadless campsites spread out along the 54-mile reservoir. idahostateparks.reserveamerica.com

At Sawtooth National Forest’s Point Campground—especially tent sites 11–17—wake early to see the morning light on the striated Sawtooth Range and 9,000-plus-foot Mt. Heyburn and Grand Mogul. Nearby Redfish Lake Lodge serves up civilization with boat rentals and a restaurant with trout and wild game on the menu. Late May–mid-Sep; book at recreation.gov

On a bluff on the northern part of Kenai Peninsula south of Anchorage, this campground has great ocean views. In mid- to late summer, watch for beluga whales. 907/224-3374; book at recreation.gov

Set near Wonder Lake, this is one of only a handful of campgrounds inside Denali, and it’s the one with the best views of Mt. McKinley. No cars are allowed into Denali, so take the Camper Bus (reservedenali.com) from the park’s Wilderness Access Center. It’s beautiful but buggy, so pack insect protection. 907/683-2294; book at reservedenali.com

A quiet alternative to the generator-filled sites along the Homer Spit, Camp Homer (6 miles inland from town) offers 15 tent pads amid a field of fireweed that produces shoulder-high blooms from late July through August. The fuchsia “walls” shield your view of other campers; some sites include vistas of 10,000-foot Mt. Iliamna, an active volcano. A shower house and covered cooking pavilion are scheduled for spring completion. Mid-May–mid-Sep; call to reserve: 907/756-1973.

One of only three KOAs in Alaska, this one is located on 18 quiet acres of land with 360° mountain views. RVs and cabins are equipped with Wi-Fi. koa.com

Get a taste of the wild coastline of Vancouver Island at China Beach, situated at the southern end of the Juan de Fuca Trail. From the campground, follow trails to the two beaches for sea otter sightings. bcparks.ca; book at discovercamping.ca

Just a half-hour north of Whistler, this campground is a good base for exploring B.C.’s “Sea to Sky” region. Request a campsite overlooking the Green River. bcparks.ca or 604/986-9371; book at discovercamping.ca

You don’t have to hike the entire 112-mile Sunshine Coast Trail to stay in one of its 12 huts. Many are easily accessible from nearby logging roads. The most spectacular digs are the winterized (i.e., cozy) Tin Hat hut, built in 2011, which sits high on a ridge facing the Salish Sea, Vancouver Island, and the B.C. coast. You may share the sleeping loft with a few other campers, but the chanterelles you find in the forests below are yours to keep. Free; no reservations or potable water; sunshinecoast-trail.com

On Skaha Lake in British Columbia’s Okanagan Valley, reserve one of 12 yurts or 50 tent sites. barefootresort.ca

Located on Tagish Lake’s Windy Arm in the Yukon, it’s the first new campground in 30 years and has 29 sites for both tents and RVs. env.gov.yk.ca

These 8 Hidden Swimming Holes Will Make Your Summer