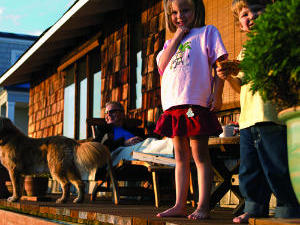 Seattle’s floating home community on Lake Union is a rare neighborhood, where homes erupt with exuberant color, quirky details, and lavish gardens, and there’s an attitude that nothing is to be taken too seriously.

Even though it’s changing ― prices are soaring, and the funky bohemian edge is in danger of evaporating ― it still harbors more character and sheer delight than any land-lubbing neighborhood in the city.

Every other year the Floating Homes Association opens the doors to a dozen or so houseboats, offering a one-day public tour as a fundraiser. (This year it’s on September 10.) Since the docks are private property, there’s no other way to see the nearly 500 houseboats from land.

Canoes and kayaks, however, are perfect for nosing through the liquid streets anytime. On Halloween, members of the Seattle Sea Kayak Club traditionally go trick-or-treating around the houseboats from the water.

Part of the fun of tooling around the community is the mixture of high and low architecture and design. The elaborate, architect-designed floating homes that you see today didn’t come onto the scene until the last 40 years, when the Lake Union houseboats first became sanctioned in the eyes of the city. Before then, sewage had been a serious issue, and wealthy homeowners on the hills above the lake abhorred the tottery shacks at the fringe of their water view. In the 1960s, the city government labored mightily to get rid of them, and in fact managed to evict more than 200 owners.

The sewage problem disappeared with a pumping system, and the city zoned houseboat moorages as residential, requiring new moorages to provide parking. That prompted property values to skyrocket, and the design aesthetic shot up along with them. Yet some of that early spirit endures ― there’s still plenty of character and imagination on display here. Some of the newer houseboats feature porthole windows and bowed roofs, recalling the era when houseboats actually were boats, capable of moving under their own power. Some feature totem poles, and at least one has classical Doric columns, as majestic as an old bank. Container gardens are lavish, and several residents have created substantial gardens on rafts tethered to their houses. Every house has a boat, ranging from battered canoes to 30-foot sloops. Ask about disadvantages to houseboat living, and you’ll usually get a joke in reply. “No lawn to mow,” says one resident, a pouty look creasing his face. An advantage they cite surprisingly often is that living in a small space forces them to simplify their lives.

The common denominator of the entire Lake Union community, says Jeri Callahan, who published a book about it two years ago, is “very strong feelings about the value of the life we have here.”

Her theory on why people are so enamored with houseboats? Everyone has an innate need to be grounded in nature, she says, but most American homes today work hard to disconnect us ― they’re insulated, double-glazed, and air-conditioned so that the outside world hardly intrudes at all. Houseboats, in contrast, respond directly to nature, even rocking with the waves nudged by a modest breeze.

To see the houseboat community from the outside only, book a guided tour on a quiet electric-powered boat (from $40/person; www.discoverhouseboating.com or 206/322-9157). Or rent a kayak from Northwest Outdoor Center on Lake Union (from $24 for four hours; 206/281-9694). Jeri Callahan’s book about the community, Staying Afloat (Peanut Butter Publishing, 2004; $15), is available from www.discoverhouseboating.com and local bookstores.