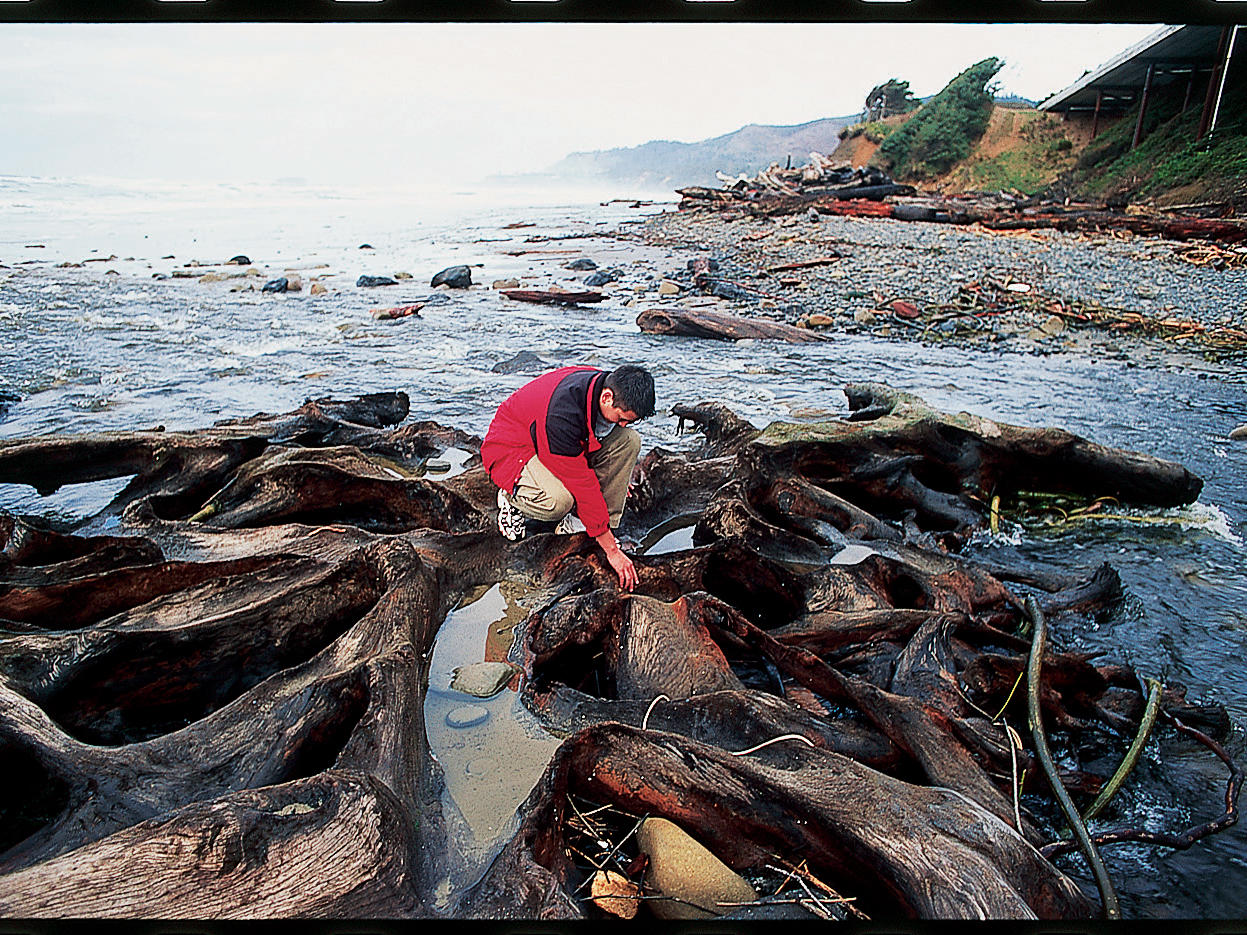 “I was walking with my family,” Roger Hart says. “At first I thought the trees were driftwood. But they didn’t move. I got curious.”

It does inspire curiosity, the long-buried ghost forest of roots and stumps that in the last few years has been exposed on this Oregon beach. It has also helped change dramatically what geologists think about the Northwest.

Roger Hart is a marine geologist at Oregon State University, over the mountains in Corvallis. He was born near Boston, but research has taken him from the mid-Pacific to South Africa. Hart has a true geological mindset: When he looks at the beach, he sees not a pretty tableau but rather a clash of elemental forces.

We walk around the roots, which shine slick in the winter sun. They are mainly Sitka spruce, Hart says. Core samples reveal them to be some 2,000 years old. “This one must have been 6 feet in diameter. A giant tree.” Hart points to a ridgeline far above the beach, where other spruces grow, the gesture implying the obvious. Big trees are supposed to grow up there, not down here. “There are two things of interest,” Hart says. “Why the trees are being exposed now. And what buried them in the first place. I suspect it was an earthquake, dropping the shoreline into the seawater. Then tsunamis came in, carrying sand from offshore sandbars to bury the trees.”

When it comes to natural disasters, every region has its crosses to bear. The Pacific Northwest suffers floods and the occasional volcanic explosion. But earthquakes registering 8 on the Richter scale? That seems, well … too Californian. What’s next? Pamela Anderson Lee starring in Rainwatch?

And yet, in the 1990s, as Hart was pondering the newly exposed trees, other scientists were noticing similar anomalies. Brian Atwater, a U.S. Geological Survey geologist, was studying buried trees on the Washington coast. These appeared to be younger, dating from 1700. Japanese seismologists found records of a tsunami striking Japan in January of that year. Accounts were consistent with a wave generated by an earthquake on the other side of the Pacific–say, along the Pacific Northwest coast.

Hart points to the wave-rippled horizon, beneath which lies the Cascadia subduction zone–the boundary where one tectonic plate, the Juan de Fuca, is sliding beneath another, the North American. “It’s all tied to the subduction zone,” he says. “Most of California doesn’t even have an active subduction zone. From a geological point of view, I think Oregon is as active as California.”

Even now, not all of Hart’s colleagues are convinced the Neskowin forest was buried by an earthquake. But it is now generally accepted that the Northwest coast is vulnerable to such a quake. “It could be 1,000 years from now,” Hart says. “It could be tomorrow.”

The Northwest seems in some ways to be coming to terms with the risk. Along the Oregon coast, you see tsunami warnings, featuring a hapless little figure being pursued by a giant wave–not especially reassuring. Hart says that after he presented his findings, other geologists said, “I’m getting out of here.” But he himself still lives on the coast. His current research focuses on the reasons–increased wave heights? rising sea levels?–the ghost forest was revealed after so many centuries.

The tide is coming in. Waves wash over the giant tree roots. “The Oregon coast is tremendously scenic,” Hart says, above the crash of surf. “But that’s because of its geology. For 300 years we haven’t had an earthquake here. Everyone thought that was good news. Well, now we know that it’s a little more ambiguous.”

The roots and stumps at Neskowin Beach State Recreation Site are best seen at low tide in winter. The beach is west of U.S. 101, about 15 miles north of Lincoln City. Be sure to obey private property restrictions while walking to the beach. This spring Roger Hart will lead Oregon coast geology tours for the Sitka Center for Art and Ecology in Otis (541/994-5485).