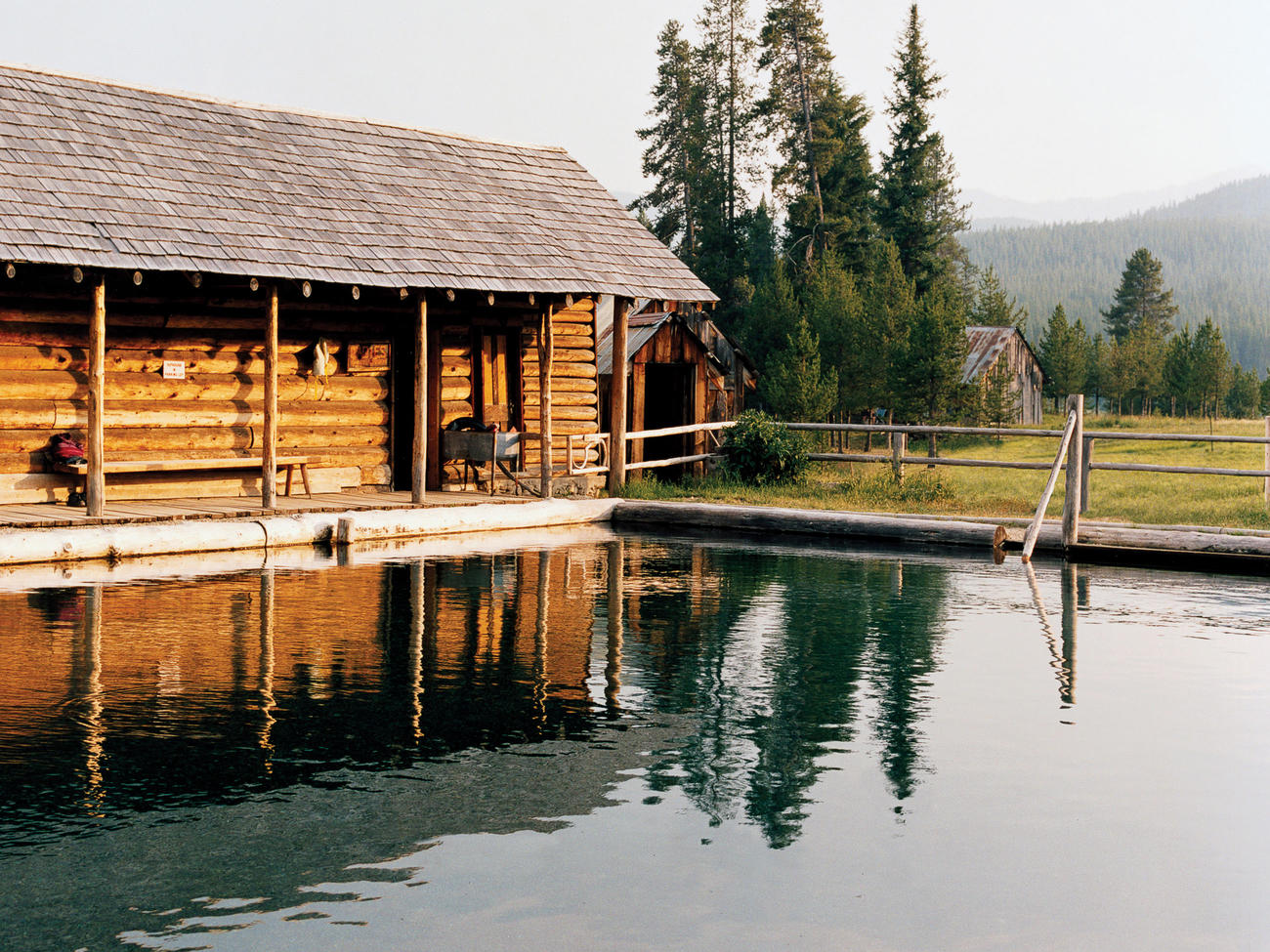 Steam hovers over the large, transparent pool at Burgdorf Hot Springs, 32 miles north of McCall, Idaho. It’s a rainy morning, and we’ve opted for these primitive springs as the perfect way to kick off our vacation.

We’ve driven from town into the mountains, past quiet lakes still surrounded by snow, following rivers and creeks through corridors of spruce and fir to a lonely dirt lot. A wild-breed turkey has waddled over to greet us, followed by a caretaker who sports a tangled gray beard down to his sternum.

My twin 12-year-old sons, Dylan and Gabe, and my husband, John, and I are the only ones here. We soak in a vintage Idaho scene: horses grazing in the meadow beneath soft rain, cabins leaning into the tall grasses, the northern Rockies surrounding all of it.

The boys take turns balancing, surfer-style, on an old kayak someone left at water’s edge, as John and I slowly sink into water heated by the earth to 113°, thinking, Yes, this is exactly the kind of luxury we had in mind.

I let out a sigh of relief. Because ― and here is my confession ― I expected, on this trip back to McCall, to be disappointed. Having read the press about McCall’s big growth spurt brought on by the opening of Tamarack Resort in 2004, I expected to find my old beloved mountain town, two hours north of Boise, transformed into something fancy and generic. Despite Tamarack’s recent financial woes, its development opened the flood-gates to sushi, spas, better cell phone coverage, and all the trappings of every other mountain resort town. I wondered and worried that McCall might not still be McCall.

The Lake, and a Race to Remember

I did not fall immediately in love with Idaho when I moved to Boise from Southern California in 1990, but my first visit to McCall sped up the process considerably. I had entered the McCall Mountain Triathlon, and as a friend and I made the drive from Boise into Idaho’s central mountains, she prepped me, “It’s gorgeous ― the forest, the lake, the mountains ― all of it … ”

The race was small town. A hundred or so athletes picked up packets at Lardo’s, a bar and burger joint. Just after dawn, we ran into the icy water of Payette Lake and submerged ourselves in beauty. Each time I reached for a breath, the sight of spectacular granite peaks over the water surprised me. The cycling leg took us along a ponderosa-lined road where I spotted whitetail deer among the trees. Then we ran on dirt trails until the course looped back toward town, where locals cheered us on from the backs of pickups. I didn’t win. (Probably all that nature-ogling.) But my friend was right. I was smitten.

The skies have cleared, and the boys and John and I lounge on the patio of Bistro 45, a locals’ wine bar and cafe with a super-casual vibe and retro board games for the borrowing. It’s one of a handful of restaurants in McCall’s tiny downtown, a cluster of shops and hotels right on the lake and less than 2 miles from spectacular Ponderosa State Park. If anything has changed downtown, I think to myself, it’s so subtle I don’t mind at all.

When our sandwiches come, Gabe, who has heard my triathlon story a hundred times, suggests we do our own version. “Burgdorf counts as the swim,” he says.

John says, “We should take the chairlift and bike down Tamarack mountain.” I’m in. We’ll top it all off with a river paddle, I suggest, as the third leg of the race. No one argues. We all carbo-load on grilled panini.

The next day, we check into a cottage at Tamarack Resort. We’re here to find out what The New York Times and The Wall Street Journal have been so excited about, why Andre Agassi and Steffi Graf were inspired to pony up funds for a planned hotel here, and ― more recently ― how the ambitious resort has had to scale back its plans in the face of a hurting economy. We stand atop Tamarack mountain, feeling out of our league. The steep slope disappears into a pile of boulders and then who knows what. John asks the question on all of our minds. “People ride down this?”

A man pedals past us and then drops off the ledge. The wheels of his muddy bike hopscotch from one boulder to the next. John reaches in his pocket for the trail map. At dinner the night before, we were certain we were a “blue” family ― not mountain-biking experts, but relatively fit, and gutsy, Idahoans. Certainly we could handle blue-designated terrain. Now John points us to the “greenie” run, and we follow. I make generous use of my brakes.

Waterfalls rush down gulches lined with spruce, fir, and the signature tamarack, and the air is pungent with the scent of recently melted earth. As I careen down the trail, much of the scenery turns into a vibrating blur, but up ahead the boys wait for me where the forest opens. On one side rises the incline of the Payette River Range. On the other lie the curve of Lake Cascade and the Salmon River Mountains beyond the valley. I’m reminded of how huge this rugged country is, and how many mountains are beyond the ones I can see.

That night we dine on seared elk medallions and delicate scallops at Morels Restaurant ― it’s hard to object to fancy new restaurants where the food is as good as this ― then soak our battered muscles in the hot tub on our resort cabin’s deck while staring up at the crisp starlight, grateful for clear skies. In the mountains, you never know what season June will be, and tomorrow we take to the river for our final leg of the “race.”

Thousands of miles of whitewater tumble down from the central Idaho mountains, so it’s no wonder my boys have ridden far more rapids than roller coasters in their lifetime. Today Dylan sits in front of me in a double ducky (an inflatable kayak for two) on our favorite day trip, the Cabarton stretch of the Payette River. We love this stretch because the current slips away from the road and into lush forest, offering a sense of solitude that’s rare on a day trip anywhere.

On past Cabarton trips, Dylan has been in the raft, and we’re both aware that just around the next bend is Trestle, the longest class III rapid of the trip. As we curve around the canyon wall, the railroad bridge spanning the river comes into view and the current quickens. “Hole is on the left?” Dylan asks in a dry, whispery voice.

“You paddle hard, and I’ll steer,” I answer. There’s a glassy pool after the rapid, but June is not ideal swimming weather.

For a moment, the calm clarity of our plan is lost in the chaotic force of white-water and adrenaline, but then Dylan plunges his paddle into each huge wave just as it’s about to overwhelm us, as if he were a pro. I’m relieved when, out of the corner of my eye, I see the gaping reversal slip by.

“That was huge,” Dylan yells. And we laugh as the final waves lift and then release us. We all pull onto a sandy beach where we rehash our various versions of surviving the Trestle Rapid.

After our picnic on the shore, the boys toss stones in the river, and John and I lie on warm boulders looking for eagles and listening to the rush of the rapid. I recall the post-race high I used to feel back during my triathlon days, thinking, This beats it by a mile. An orange raft from the outfitting company rounds the corner carrying another family. We wave to one another as boaters always do on rivers – kids, parents, river guide ― all of us wearing that particular aren’t-we-so-lucky-to-be-here grin. And I notice that even though McCall now has fancy restaurants and spas and plush hotel rooms with lake views, I’m happy to share this big, wild place that really does still feel like home.

How to get to McCall

From Boise, take State 55 north for 100 scenic miles to McCall.

Things to Do in McCall, ID